What's Up With That New A2 Milk On The Commercials?
Odyssey

What's Up With That New A2 Milk On The Commercials?

As if keeping up with all the milk-able plants wasn't enough, now there are letters involved. Fear not, good friends. 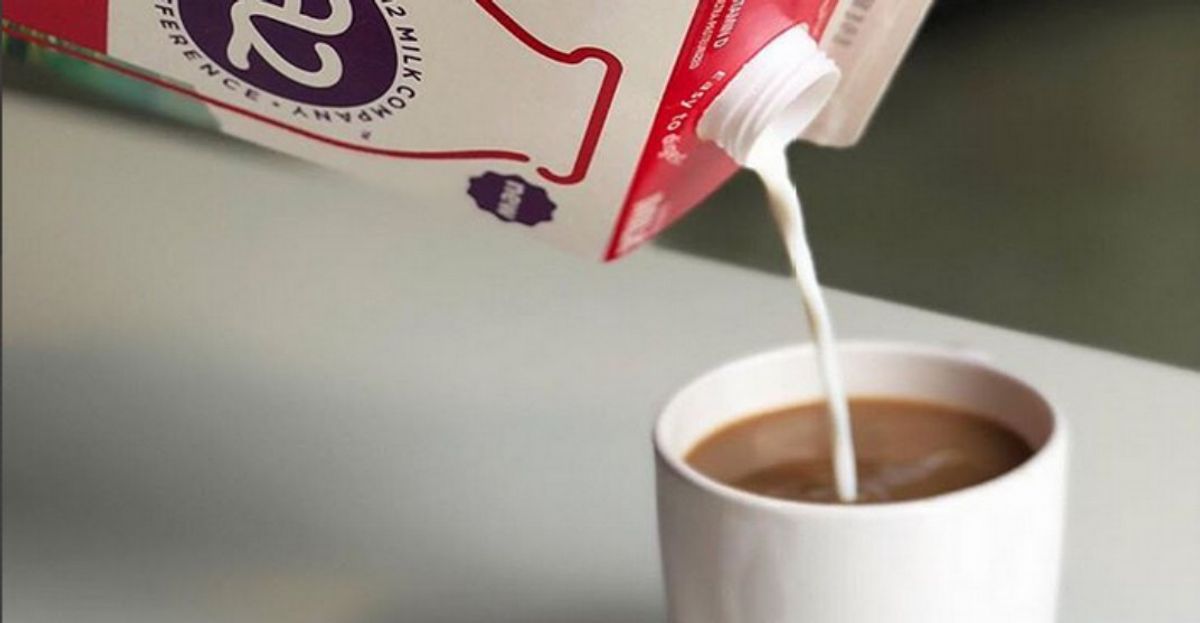 A few moons ago (maybe a month), I was watching the television with my dear parents, when a commercial for "A2" milk came on. My mother promptly inquired whether I had heard of such a beverage. I enjoy keeping up with new products in grocery stores, online, or in Food & Nutrition Magazine (it's fabulous you guys), but I had not heard of this before.

I also checked Google, because the product sites can be pretty handy for acquainting yourself with the product. I was actually pretty impressed with their product website, as they have a specific area for healthcare professionals (or curious health professions students?) to read up on the product and the science behind it.

They mention in a disclaimer that the research and information may not be complete, and that they do in fact believe that breastfeeding is the best option for infants. (Please do not give your infants plant-based milks, cow's milk, goat's milk, or anything other than breast milk or formula unless otherwise recommended by your doctor…)

Anywho, let's start with a brief crash course in milk.

There's two proteins in milk-- casein and whey. Casein is the main protein (82%). There's different types of casein, including one type called β-casein, and within this category, there are two types of β-casein. What's the difference?

Remember from your science classes how proteins are made of amino acids? The sequence of these amino acids are slightly different in two subtypes of β-casein. One is called A1, and one is called A2. They are just proteins with different structures. When these proteins get broken down, A1 is likelier to break down and recombine with substances, to become a certain substance that might cause inflammation in some individuals.

This is a rough explanation of the theory, and certain conditions have to be considered. #1 - Certain cows produce more of the A1 protein, and some produce more of the A2, which doesn't produce this potentially inflammatory substance. #2 - Theoretically, these effects (inflammatory, or lactose-intolerant-like symptoms) may only manifest in certain individuals. #3 - What has the research shown about milk from cows that don't produce the A1 version of the protein?

My own disclaimer-- I have not done a fully-extensive review, but I have done a little preliminary research on the topic.

A2 was a concept started in New Zealand several decades ago. Preliminary research was conducted which showed initial promise in studies, particularly regarding a potential role in type 1 diabetes or coronary heart disease. However, some of the study designs have been questioned on the basis of applicability, and several later studies failed to replicate the results, leading the efficacy of A2 milk for its original purpose a matter of debate.

The author of this particular 2005 review speculates that, if the research had shown a more conclusive benefit to A2 milk, the dairy industry likely would have shifted to include more A2 milk (i.e. breeding more of the cows that produced only the A2 protein.)

Even still, there are other authors who hold that the case for A2 milk should not be dismissed so quickly.

The new marketing platform for A2 milk, which has carried across to the UK and now to the US, is principally as a solution for some individuals who might believe they are lactose intolerant but may be experiencing discomfort from A2 protein rather than lactose. These claims are not completely unwarranted; a 2017 study of Chinese adults, self-identified as lactose-intolerant, showed that A2 milk produced fewer gastrointestinal symptoms than milk with A1 protein.

So what are the definitive results? Hopefully, we should have a better idea soon. There are several official clinical trials happening right now, to confirm its effects on individuals intolerant to milk (but not lactose), gastrointestinal and cognitive effects on preschool-aged children, and even autism and ADHD.

In conclusion, A2 milk could be something to experiment with if you think your intolerance might not be due to lactose. One study with athletes found that there was no statistically significant difference (from a performance perspective) between A2 milk and regular.

From a theoretical standpoint, A2 proteins may be more innocuous when it comes to inflammatory diseases, gastrointestinal symptoms, or more; the results may be mixed now, but current clinical trials may soon give us an even better idea of A2's efficacy and role in nutrition and human health.