8 Reasons Why You Need to Visit Pittsburgh
Odyssey
CurrentlySwoonLifestyleHealth & WellnessStudent LifeContent InspirationEntertainmentPolitics and ActivismSportsAdulting
About usAdvertiseTermsPrivacyDMCAContact us
® 2023 ODYSSEY
Welcome back
Sign in to comment to your favorite stories, participate in your community and interact with your friends
or
LOG IN WITH FACEBOOK
No account? Create one
Start writing a post
Sports

8 Reasons Why You Need to Visit Pittsburgh

The Steel City is waiting for you. 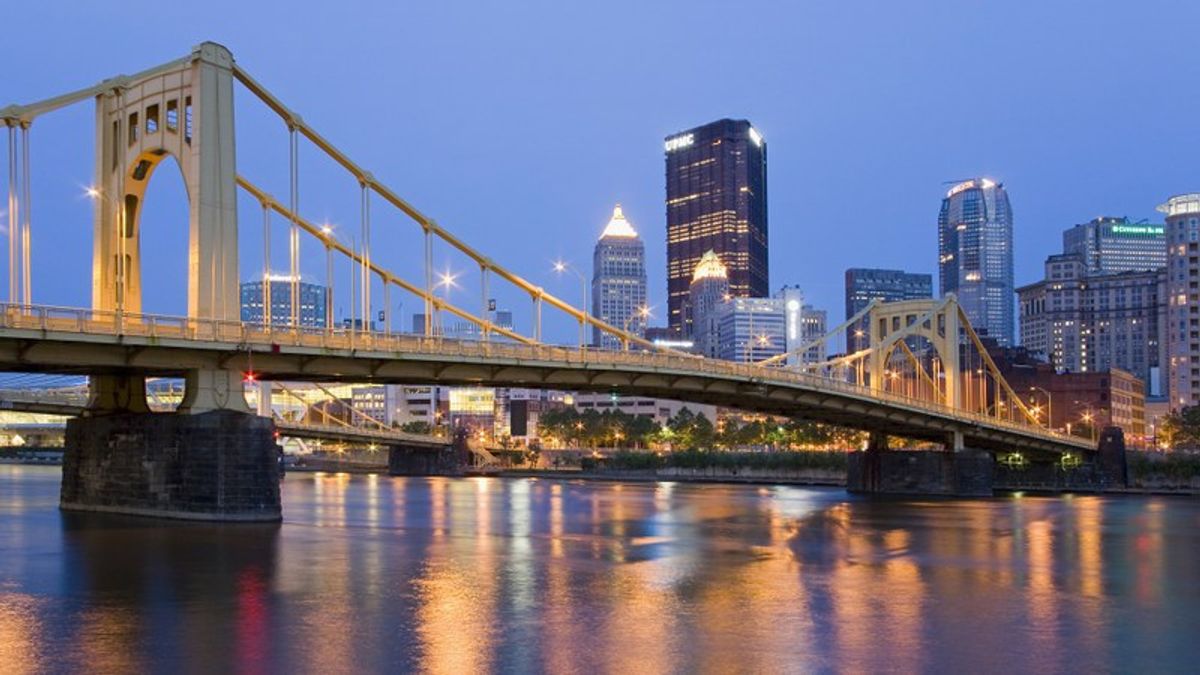 Pittsburgh is more than just my hometown. It’s a city with a beautiful skyline, an impressive entrance, delicious restaurants and extremely friendly people. It houses sports teams, festivals, marathons and concerts that draw in huge crowds. Pittsburgh is vibrant throughout the seasons in every way, so here's a slightly biased list of reasons why you should make the Burgh your next vacation destination.

From delicious bowls of pho to yummy milkshakes, you'll find food from every corner of the world in Pittsburgh. The city's cultural atmosphere is evident throughout, especially in the famed Strip District. Here, you'll come across ethnic grocers, various kinds of markets and restaurants galore. A Pittsburgh staple is the Primanti Brother's sandwich, which consists of cheese, meat, sauerkraut and french fries placed between French bread. Not your scene? Head to Pamela's Diner and devour a plate full of pancakes. There's a lot to choose from, so come hungry.

A major perk of visiting Pittsburgh is that everywhere you go, there's always something beautiful to look at. A famous spot to catch the view is Mt. Washington. Step out onto one of the many platforms and take in the city's breathtaking skyline. It's especially pretty at night, when every building and bridge is lit up in different colors. Be sure to catch a ride on the Duquesne Incline, which takes you up and down Mt. Washington. It's a Pittsburgh staple and something you have to experience while you're there.

Whether or not you're a fan of Pittsburgh sports teams, or sports at all, there's no denying how fun attending a game can be. Head down to PNC Park and catch a Pirates game. The stadium provides an undeniably great view of the city, which looks even better with fireworks atop it. Not into baseball? The Steelers hold a dear place in every Pittsburghers heart, so catch them in action at Heinz Field. Be sure to bring your Terrible Towel to get the full experience. And if none of that floats your boat, the Penguins can make sure anyone has a good time. Watch the three-time Stanley Cup winners take the ice at Consol Energy Center. Sidney Crosby is even better in person.

If you happen to visit during the beginning of June, you can catch one of the city's greatest events. The Three River Arts Festival is one week long and chock full of activities, concerts, vendors and food trucks. You can listen to live music at the Point, one of Pittsburgh's most famous and gorgeous parks. If you're interested in shopping, hundreds of local retailers set up shop for the entirety of the festival. Several food vendors and trucks serve up delicious food and cool treats that will keep you going throughout the day. It's great just to stop by and walk around, taking in the beauty of the city during the summer.

The artistic culture in the city is huge. There are a total of 31 museums in Pittsburgh, the most famous being the Andy Warhol Museum. Each museum has free or relatively cheap admission costs and there's so many different kinds of exhibits to see. If you're interested in Native Americans, Eskimos and historical architecture, head to the Carnegie Museum of Natural history. Looking for science experiments fit for all ages? Check out the Carnegie Science Center. Don't fret, there's also a museum full of plants. Phipps Conservatory is known for its exotic flowers and trees. With so many options, there's an exhibit for every type of person.

Now, I know what you're thinking. "What's so great about a big body of water?" Well, let me tell you. These three rivers are pretty much what Pittsburgh was built around. They're the reason for the beautiful bridges and they add that extra something that no other city really has. You can climb aboard the Gateway Clipper, a ferry that takes a tour around the city, and simply bask in it. You can also take a ride on the Just Ducky Tour, which shows you the city on both land and water. Kayaking on the rivers is also an option if you visit during the summer months.

While Pittsburgh's winter festivities aren't exactly on par with New York City's, it doesn't mean they're not worth checking out. Pittsburgh puts on a great Light Up Night every year, consisting of live music acts, food vendors and amazing light displays. There's also the PPG Rink, which is a huge ice skating rink in downtown Pittsburgh. It features a massive Christmas tree which is decked out in ornaments and lights. Macy's always puts up their window displays, and the city finishes the night with fireworks. Definitely not something to miss if you happen to be visiting in the winter.

Who doesn't love concerts? With so many different types of venues and hundreds of artists that perform in Pittsburgh each year, you can be sure to find someone you like while you're here. Catch a show in an old church, the Altar Bar, or experience a massive arena show at Heinz Field. More and more people are flocking to the city to see their favorite artists every year, so be sure to get your tickets fast.

At the end of the day, Pittsburgh is not only a fantastic city to grow up in, but it's one that everyone should have the opportunity to see at least once in their lives. With so much to do and so much beauty to see, there's no reason why Pittsburgh shouldn't be at the top of your travel bucket list