As 2016 drew to a close, I realized I needed to give credit where credit was due. Thanks for saving my life, Samyang 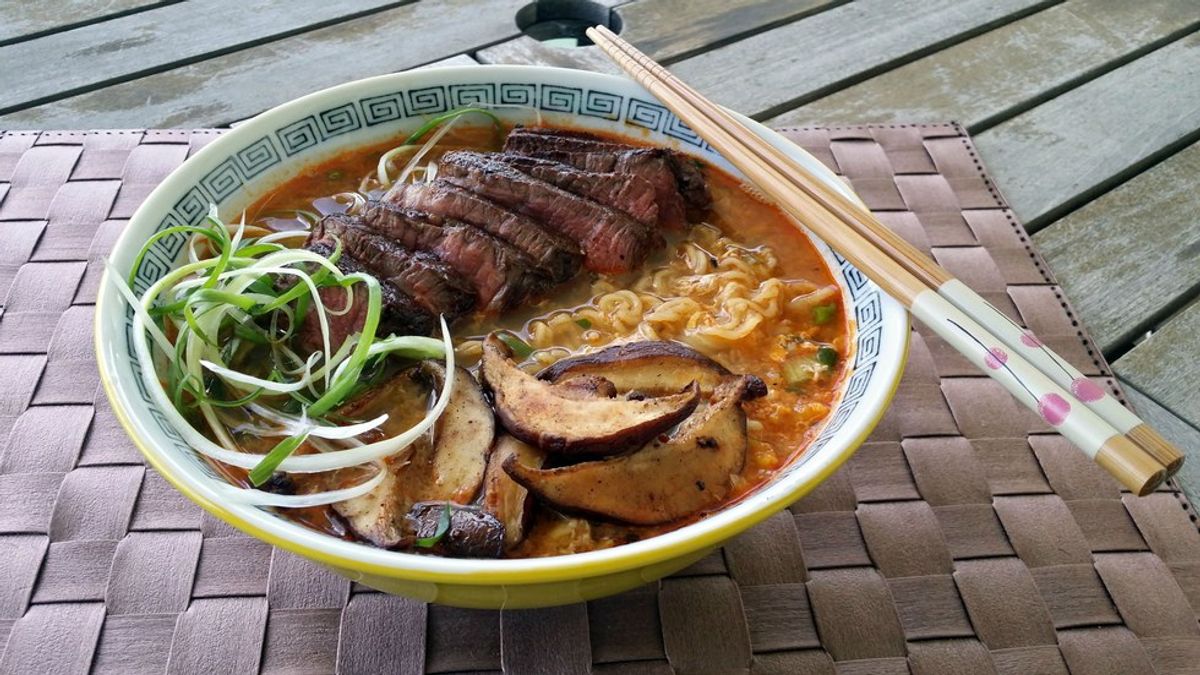 If there's anything that stands out about this past year for me, it was probably the fact that I had never eaten more instant noodles in any other year of my life. 2016 saw the tail end of my freshman year of college as well as my first time living in an apartment of my own, which meant that as my personal funds took a sharp downward spiral, my consumption of instant ramen increased steadily. Although, that's still a tame way to put it---honestly, it spiked immediately. My mom left me with cupboards full of my favorite Korean ramen brands and I didn't lay a finger on anything else for weeks. How lazy am I? I don't want to talk about it. Spicy, savory, carby food is delicious and a prep time of 3-5 minutes makes my depressed self so weak. Like...I think at some point, my fridge had things like ground beef and apples and pasta and pickles. Even a vegetable or two. Now it's 85% condiments. My cabinets are stacked to the top with ramen cups and packs, most of which come from a Korean grocery.

Truthfully, we all know the correlation between so-called "crappy" food and low income. Even if you've never heard of the statistics showing that obesity rates are higher among poorer people, you've probably seen for yourself grocery shopping how drastically cheaper instant, processed, and nonperishable foods are when compared to fresh and/or healthy items. Oftentimes, those of us who can't afford to eat healthy face pressure to change that in spite of our financial means, to either save up or to use tricks and hacks to overcome this, to make ends meet despite the impossible and spend copious amounts of time cooking and putting together these dishes. There are a plethora of articles and guides out there on healthy eating on a budget, with everything from this "actual poor student cookbook" in images on Imgur to this blog article on cheap healthy meals for students if you have the time, energy, and mental capabilities to do that.

However, if you're a full time student, or you work a lot, or you have family/children to take care of, or you're too mentally ill, too depressed, too busy, too tired, too pissed, too drunk, too stoned, or you just really wanna try some instant ramen brands, then here are seven cheap ones that I loved this year. These are all slightly more expensive than the cheapest noodles you can get (which would be Maruchan, but, come on, you need to treat yourself sometimes) but are still dirt cheap compared to non-instant food. Not only that, but they are much closer to tasting like a "real meal" than standard American instant noodles and will likely fill you up a lot more, since many of them come with packs of dried veggies, fish cakes, and seaweed.

Nicknamed "fire noodles", Buldalk Bokkeumyeon literally translates to "Hot Chicken Fried Noodles", and is considered one of the spiciest instant ramen brands in South Korea. The noodles come with a sauce packet full of red pepper and fried chicken flavored sauce, and another packet full of shredded seaweed and sesame seeds. Don't forget to toss the water out before dumping in the sauce packet---the noodles are meant to be eaten without broth, for a delicious texture and intense flavor.

They also come in cups for quicker prep. Just pour hot water into the cup, let it sit for 3 minutes, then poke holes into the designated spots on top of the cup to drain the water.

Some popular twists to this ramen is the addition of cheese, to the point that Samyang actually came out with a line of cheese-flavored Buldalk Bokkeumyeon. Some other great additions are kimchi (a Korean dish of pickled vegetables in red pepper sauce), chicken, and ttuk (rice cakes).

Nongshim's Shin Ramen is already super popular for its spicy and seafood-esque flavor, but this updated black label version pumps it up with more garlic and broth flavor as well as the addition of green and red peppers. It comes with a regular flavor powder packet as well as a packet of mushrooms and vegetables.

An easy compliment to this dish is a soft-boiled egg and a slice of cheese. You can also throw in the raw egg while it's cooking for a nice poached one. To make this a more filling dish, you can turn it into budae jjigae (army base stew) by adding kimchi, sliced hot dogs, sliced spam, green onions, and eggs. Usually budae jjigae also includes rice cakes and odeng, which are fish cakes commonly sold as street food in Korea.

Based off of udon, the classic Japanese favorite characterized for its savory but mild broth and its thick chewy wheat noodles, Nongshim Udon is the instant version that you can get at pretty much any Asian import store. This brand only comes in the cup version, but the cup large and contains a big and filling serving. It also takes a couple more steps to prepare than conventional noodles, but the prep time is still definitely under seven minutes. Not only that, but the top of the cup has liftable tabs to help dump out the hot water. Once you dump out the water, add in the flavor packets and more hot water to create the famous udon broth.

The finished noodles contain green onions among other vegetables, as well as thin fish cakes known as tamaboko.

Based off of a traditional Korean noodle dish called jjajangmyeon, Jjapaghetti delivers the same meaty, savory taste of the black soybean sauce used in jjajangmyeon except with classic ramen noodles instead of thick wheat noodles. Along with a sauce packet and an oil packet, these noodles also come with a packet of vegetables and dried meat to cook along with the noodles. For a more traditional taste, add thin slices of cucumber and a boiled egg on top.

A bold but playful twist to conventional instant ramen, Ottogi's Cheese Ramen is like a delicious, melty fusion of all the heartiness of macaroni and cheese and all of the flavor and quality of ramen noodles and broth. The cheese isn't too artificial tasting or overpowering, and the dish still tastes enough like ramen that it makes for a flavorful meal with a variety of flavors. If you want more textures and spices, add green onions, sliced hot dogs or spam, and mozzarella cheese.

If you like spicy ramen that bursts with flavor, then Paldo's Yukejang is a perfect (and low cost) choice. Another delicious take on a traditional Korean dish, these instant noodles are based off of the Korean beef and vegetable soup known as yukejang. The broth has the same hearty and savory hot flavor as yukejang with the addition of classic ramen noodles. The cup noodles also includes small dried vegetables, such as green onion, as well as seaweed and thin Japanese fish cakes known as naruto.

For even more freshness and flavor, you can add chopped green onions, red peppers, mushrooms, sliced beef, and a poached or soft-boiled egg. A lot of Korean folks eat this with kimchi and gosari, which are fermented fern stems.

Emmaline B
The Narrative
6499
https://unsplash.com/photos/O0T1SIgHAfM