6 teams currently need head coaches. Will there be any surprises this season? 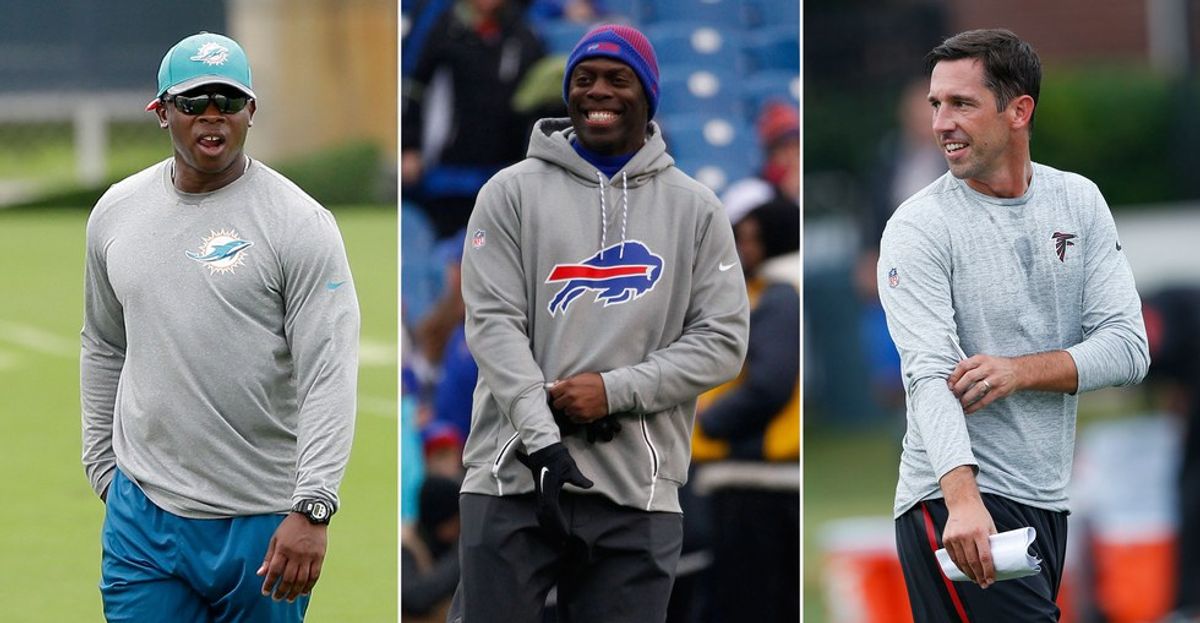 There are currently 6 teams in need of a new head coach, with a potential 7th opening up this weekend if the Houston Texans lose to the Oakland Raiders.

Below I've listed who has interviewed or will interview with each team and who the ideal fit(s) would be for their open positions.

Best fit: Anthony Lynn. Anthony Lynn is currently seen as the front-runner for the Bills job. Bills running back LeSean McCoy said, "I like Coach Lynn, I really do. He makes everybody accountable. He's that leader, that type of coach we need. A lot of players like playing for him, (including) myself."

The Bills aren't a bad team, but they aren't a great team. They're a team that needs a few extra pieces (especially a QB) and a push from a strong leader at the head coaching position. With Lynn as head coach, the Bills won't have to necessarily learn a new gameplan and playbook. By hiring Lynn, the team will have a coach to look up to and rally around. Only problem with this is that Lynn will most likely be sought out by many of the other teams looking for a new leader.

Denver has a Superbowl caliber defense, and that's the only reason they went 9-7 this season. Their offense was atrocious. That's why someone like Kyle Shanahan could be a great fit for them. Kyle has gotten the best out of quarterbacks, regardless of skill level (Brian Hoyer) or age (RGIII). He is also leading the NFL's best offense with the Atlanta Falcons. While he wouldn't be able to turn Denver's offense into one of the league's best within a season or two, he still has what it takes to make their offense way better. With their defense, they only need a middle of the road offense to make it back to the playoffs.

At the same time though, with defense being their strong suit, Vance Joseph might be a great pick. Denver was able to win the Superbowl last year with an average offense because they defense was incredible. Hiring Vance Joseph could make their defense potentially even stronger than it was last Superbowl.

Similar with the Broncos, Kyle Shanahan would be great for the Jaguars because he could get the best out of Blake Bortles. The Jaguars spent a first round pick on Bortles, so it's be best to not throw him out the door yet.

Doug Marrone would just be a good fit based off continuity. Marrone would most likely keep the coordinators and position coaches he thought did a good job in 2016, and replace the bad ones with new faces.

You're going to see Kyle Shanahan on every list because he's going to be one of the most sought after candidates and has what it takes to make a great head coach. He'd be great in LA because he'd be able to develop Jared Goff and would know how to best fit Todd Gurley in their offense.

Sean McVay would be great for the image of the team, because he would be the youngest head coach in NFL history (he'd by 31 by the start of next season). He'd bring a lot of excitement to Los Angeles. Last year's #1 pick at QB and the youngest head coach in history? That'd be huge for ticket sales. However, he also has helped develop Kirk Cousins into a franchise NFL quarterback. He has what it takes to develop Goff to at least be better than he was this season.

Teryl Austin got the most out of a Lion's defense that really didn't have any major superstars. The Ram's obvious strong point is on defense, so why not hire a coach that could help take their defense to the next level?

The Chargers offense, when healthy, can keep up in a shootout with most teams, so long as Phillip Rivers is starting. If they could beef up the defense, their overall team could drastically improve. Patricia and McDermott are used to running defenses that are on the field a lot, due the fast pace and scoring power of their offenses. The Panthers slacked off this year, but just look to their Superbowl run last season as an example).

The Chargers defense wasn't actually that bad this year. They were 8th in pass yards allowed, 9th in points allowed, 14th in yards per game, and 26th in rush yards allowed. If they can stay healthy, they have the players to potentially approach being a top-10 defense, especially with Joey Bosa terrorizing quarterbacks off the edge.

It'll be tough for the 49ers to succeed with Jed York at the top. However, there are two coaches I could see succeeding somewhat in San Francisco: Josh McDaniels and, while he hasn't been signed up for an interview yet, Mike Smith.

Josh McDaniels could potentially be a good fit because he could help bring Jimmy Garropolo over in a trade. While the 49ers won't part with the #2 overall pick, they do own the 2nd pick in the 2nd round. Couple that with another high pick(s) and the 49ers could potentially have their quarterback of the future. McDaniels already knows Garropolo's strengths and weaknesses, so he wouldn't have to learn all about a new quarterback (since there's no doubt someone new will be starting next season).

Mike Smith would be a good fit because he could bring some instant stability to the 49ers. He took over after the Mike Vick fiasco, and brought success and stability to the Falcons. He drafted Matt Ryan and turned the team into a team that frequently was dangerous in the playoffs.

Chances are Jed York will screw this up again though.