He is definitely embracing his last name. 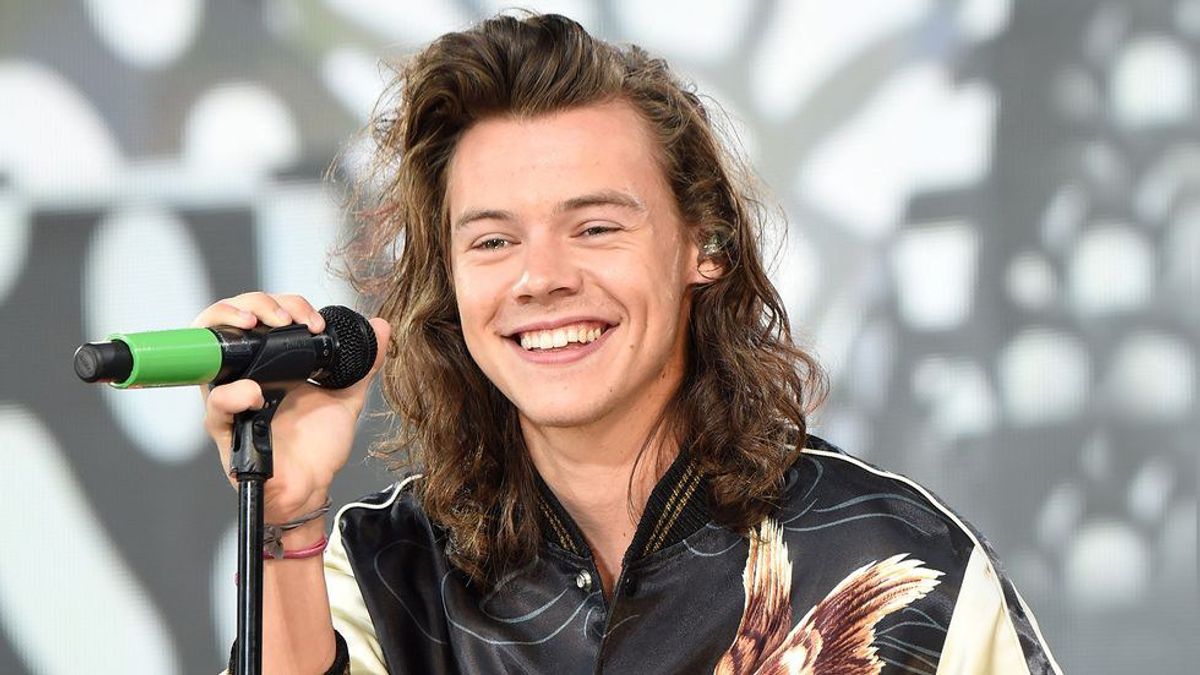 Harry Styles may be best known for being a member of One Direction, but he is quickly making a name for himself in the fashion industry due to his unique and irreplaceable outfit choices. His signature style has been characterized by patterned suits, suede boots, skinny jeans and print shirts. Styles continues to push the boundary of men’s fashion. At an event, you’ll probably find him in a Gucci suit; on the streets, you’ll find him dressed in his signature black skinny jeans and a pair of brown suede boots. Whether it be at an awards show, fashion show, out to dinner, grocery shopping or performing on stage, Styles will be well-dressed and is quickly becoming a male fashion icon.

Styles attended the Burberry Prorsum Show during London Fashion Week in 2013. He wore a cheetah print shirt with a black coat, which gives another dimension to men's fashion in the form of print tops.

In 2013, Styles' signature hair style was pushing his curls back with a shirt tied as his headband and he definitely made a statement by doing so.

At the 2013 British Fashion Awards, Styles won the Vodafone British Style Award and looked stylish while receiving his award in an all black outfit and scarf.

The wedding of band member Louis Tomlinson's mother presented the perfect opportunity for Styles to show off his exquisite taste. He wore all black with a hat and patterned scarf that showcased his true style.

Styles' street style is one that includes patterned shirts and skinny jeans. This style is shown when he was spotted on the streets in a YSL shirt, leather bag and black skinny jeans.

Another iconic outfit from November 2014 was a solid, blue shirt paired with a patterned scarf and his trademark suede boots.

I may be a little biased because I'm from Wisconsin, but this is one of my favorite outfits. He was spotted in NYC, wearing a Packers hoodie with a beanie and a coat with a pair of suede boots. Despite the Packer gear, his outfit is the perfect example of a fashionable, everyday outfit.

Spotted out at a London fashion party, Styles went for another bold, paisley, printed shirt with a tie and it was another look that makes him stand out in the men's fashion industry.

Even though, Styles was just going out for coffee, his outfit was still one that stands out. A printed shirt of pink feathers, skinny jeans with a hole and suede boots, Styles was staying true to himself.

One Direction performed on Good Morning America in August of 2015, and Styles had one of his boldest fashion statements yet. He performed on the show wearing a YSL baseball jacket that probably costs more than you can imagine.

Styles attended a London Fashion Week Party in a Gucci suit and basically became a spokesperson for the brand.

Another YSL jacket was added to Styles' closet and this one had star designs and was maroon with sparkles. He paired the jacket with a hat, sunglasses, suede boots and skinny jeans.

Styles was spotted in yet another form of YSL apparel, this time being in the form of a fur vest.

On Jimmy Kimmel Live, Styles took one of his biggest fashion risks by wearing a pair of floral printed pants.

The band appeared on the finale of the X Factor UK, and Styles wore a full floral suit from Gucci. This was one of his best outfits yet.

Styles flew to Miami, and even though he had just spent nine hours on a plane, his outfit was still beautiful and put together.

Still wearing his signature suede boots two years later, Styles is pushing the boundary by wearing a long striped coat on a night out.

So, Styles, keep doing you because your style is incredible and continues to push the boundaries and reinvent men's fashion.