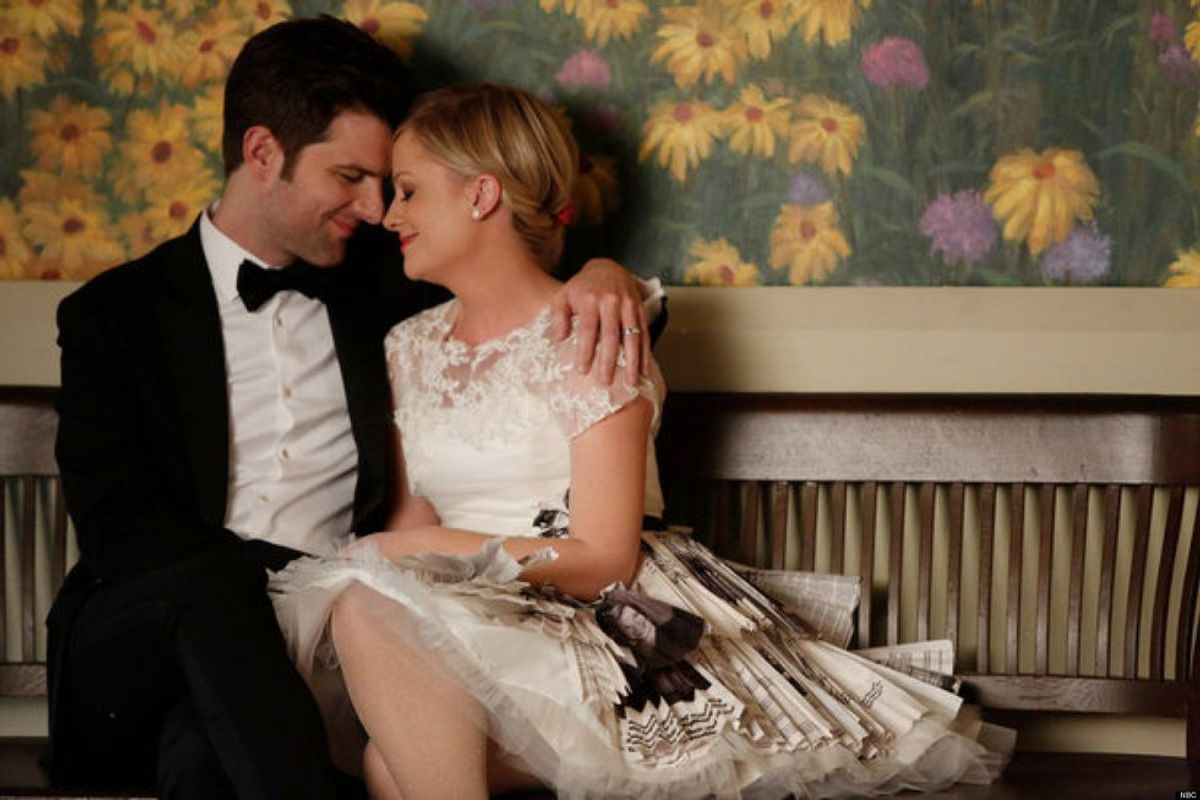 Recently just finished watching "Park and Recreation" on Netflix and I can easily say my favorite relationship between two people on the show was Leslie Knope and Ben Wyatt. I realize that these people are made up characters and their relationship is practically perfect because that's how the show brought in more ratings but it doesn't stop me from hoping my future relationship will be just as good as theirs.

1. Leslie comes up with the best compliments for Ben.

I don't think I've ever heard such awesome compliments. Every time she says something nice about Ben, it's completely unique to him and it's different every time. Whether it's calling him a hummingbird or complimenting his butt, Leslie Knope comes up with some pretty cool compliments for Ben.

2. They were best friends before they dated.

Even though they hated each other before they eventually became friends, you knew as a viewer they would end up together in some way. The chemistry was just there on screen and as they spend more and more time together they quickly became friends and what you hoped would be more.

3. They know every intricate detail about each other.

Because they were friends before they dated, it gave them the opportunity to learn all of the weird things about each other. This includes the fact that Leslie is so not chill about anything and her man crush is Joe Biden and Ben has a love for calzones and loves making his own board games.

4. When they said "I love you" for the first time.

This goes back to them knowing literally everything about each other. Ben not only gave up his job to be with Leslie but he also said "I love you " in the most Leslie way there is; on a court record. She reciprocates the gesture by reopening the record and I don't think they could have said it to each other any other way.

5. Ben was there to listen to Leslie when Ann moved away.

One of the hardest things for Leslie was letting Ann move to an entirely new state becasue Ann was her best friend. When Leslie couldn't talk to her all of the time, Ben stepped in and offered to talk about all of the girly things they talk about despite him probably not knowing anything about Sandra Bullock's skirt length.

Leslie and Ben had a rocky start to their relationship but when they finally said "I love you" to each other it was magic. It just shows you that they know everything about each other. And in true Leslie Knope fashion she pauses Ben so she can remember every detail and then says yes before he can even ask her.

I'm not going to lie, I was a sobbing mess during this entire episode. I just love them and the fact that they had a gut feeling that they should just get married right away and they were able to do it in front of their closest friends. I wouldn't be able to picture them getting married any other way.

8. When Leslie wanted to make Ben's parents happy even though Ben said it was a lost cause.

Leslie has a thing to pleasing everyone around her even though it may not be worth it. She wanted to unite her family with Ben's because it was important to her that everyone got along. While things may not have gone as planned she was able to meet her future in-laws and it made Ben happy which was all that mattered to her in the end.

9. They believe in each other whole-heartedly.

Whether one of them is running for office or they just need out of a sticky situation, they believe in the other person 100 perent. They are always right there on the sidelines cheering the other person on and it's enough to just melt your heart.

10. When Ben took Leslie on a spontaneous trip to Paris when she's recalled as city councilor.

Ben knew that Leslie was really sad that she was recalled and saw that they should get out of Pawnee for a bit so he took her on a spontaneous trip to Paris. It not only gave them a romantic getaway but it also gave Leslie some perspective on moving up in the political ladder.

11. They defend each other to the unreasonable citizens of Pawnee.

We all know that the citizens of Pawnee really like to stand up for what they believe in, no matter how ridiculous it is. This makes for some sticky politics as Leslie and Ben learn quickly that you can't please everyone. Because of this, they have to defend their spouses stance and decisions making them the perfect team.

12. As they get older they still act like teenagers.

This is my favorite part about their relationship. From day one they were constantly making remarks to each other about how they needed to make out with each other and they didn't care who knew. Even as they age into their forties, they behave like they did when they first started dating.

13. They always support each other in their endeavors.

Whether it's Leslie running for Indiana Governor or Ben Wyatt running for a position in the House of Representatives, they both support each other and want the other to do well. They put aside their own pride and make it work so they can fulfill their political dreams.