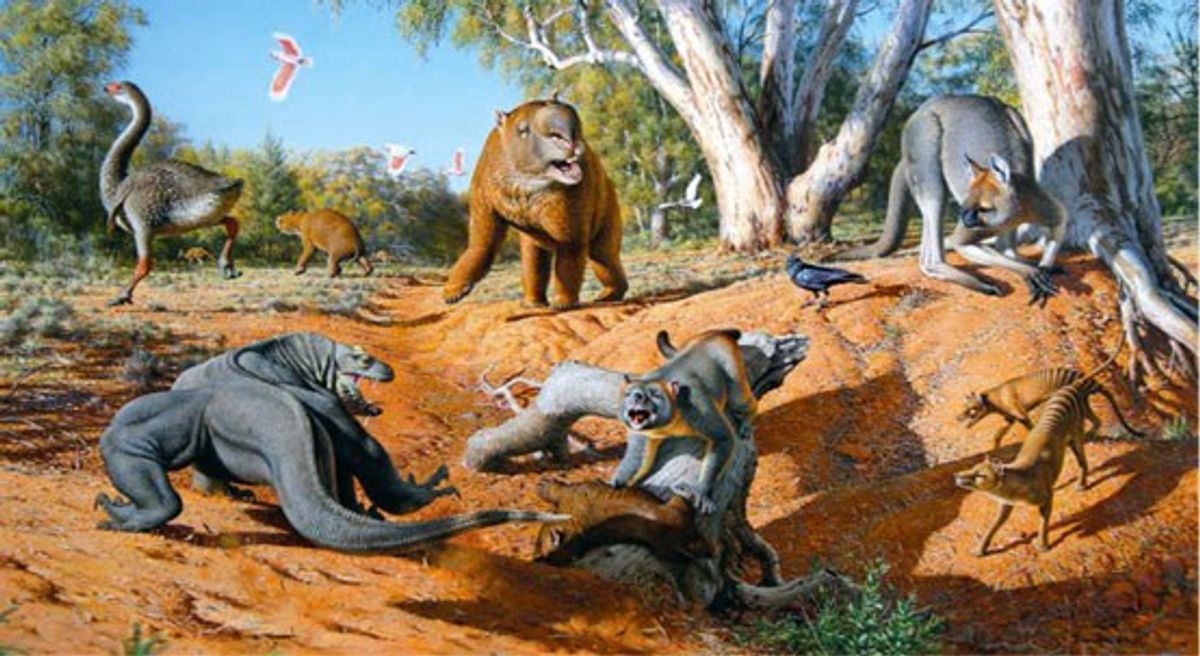 The term megafauna can be used to refer to any giant animals, regardless of whether they are terrestrial or not. Usually, however, it is used to refer to gigantic terrestrial animals that lived during the Pleistocene (2.5 million - 11,000 years ago). Some of the most notable species of the time lived in the Americas, Northern Eurasia and Australia.

There are different theories about how megafauna arose and why it went extinct. You can read more about it in Wildlife Wednesdays' presentation on megafauna. Many of the illustrations in this article are taken from National Geographic's encyclopedia Prehistoric Mammals.

Mammoths are some of the most well-known megafauna species. The Columbian mammoth was one of the largest species. It lived in North America and evolved from the steppe mammoth.

Columbian mammoths reached 13 ft (4m) height at the shoulders and weighed 8-10 tonnes. Their tusks were replaced several times during their lifetime. For some time before their extinction, these mammoths lived with Paleoamericans who hunted them and depicted them in their art.

The moa were several species of flightless birds living in New Zealand. The largest ones reached 12 ft (3.6m) in height. It is estimated that when Polynesians settled in New Zealand, moa numbers were around 60,000 and that their extinction was mainly due to hunting.

Haast's eagle was the largest eagle known to have ever existed. It lived in New Zealand and is believed to have gone extinct when its main food source, the moa, were driven to extinction. An individual of the species is depicted in one of the moa drawings above as well.

Argentavis magnificens is one of the largest birds known to have ever existed. It lived in what is today's Argentina, and its wingspan reached 23 ft (7m).

Indricotherium transouralicum is the largest known terrestrial mammal. It was part of a genus of hornless rhinos. These animals lived in Eurasia and reached more than 18 ft (5.5m) in height, weighing more than 15 tons.

Arctodus simus is one of the largest bears to have ever existed. It is known as "the short-faced bear" and lived in North America. It might have been faster and more aggressive than most predators.

Megaloceros giganteus is one of the largest deer species to have ever existed. It lived in Eurasia and Africa. It was up to 2.1 m (6.9 ft) tall at the shoulders with its antlers weighing up to 40 kg (88 lb).

The American lion (Panthera leo atrox) was a lion species living in the Americas. It is one of the largest cats to have ever existed. It was about 25% larger than a modern day African lion.

Megatherium americanum was one of the largest species of giant sloths. It lived in the Americas and reached up to 2.1 m (7ft) in height. It could stand on its hind legs.

Macrauchenia patachonica was a member of a genus of ungulates. It was a huge mammal living in South America and had a small trunk. Its name means "long llama".

The giant kangaroos of the genus Sthenurus were some of the largest kangaroos to have ever existed. They lived in Australia and the largest reached sizes twice those of modern day kangaroos. They are also known as "short-faced kangaroos".