No one should have the right to choose for somone else. 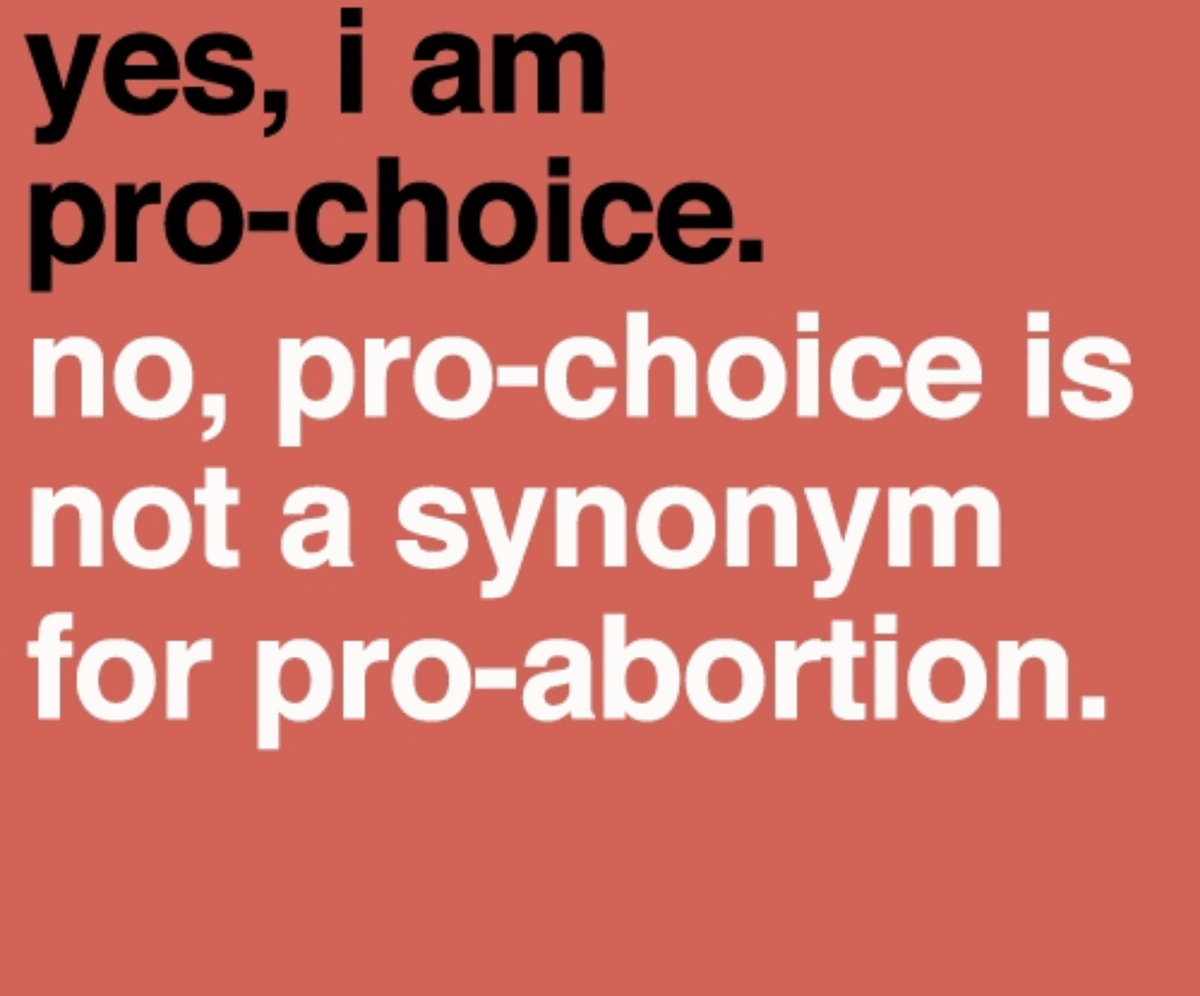 I've been pro-choice since I first learned about abortion, when I was about 16. These are the reasons why I support a woman's (or man's, I don't judge) right to choose.

1. Bodily autonomy is a fundamental human right, and the law.

I shouldn't have to explain this one, but alas, I do. Bodily autonomy means that a person cannot be forced to relinquish control over any part of their body, and cannot be forced to donate organs, tissue, or blood, even if they're dead. Many people have argued this point and many others have contested it, stating that bodily autonomy then exists for the fetus as well. However, the bodily autonomy of an existing, self-sustaining human being is much more imperative than that of an undeveloped, entirely dependent grouping of cells that merely has the potential to become human.

Another argument involving bodily autonomy suggests that by not allowing the option of abortion, you are giving a fetus more rights to a woman's body than she herself has. The counter has been that it's simply not giving the woman the right to "murder," just as no one else has that right. Let's take a look at why that's simply not true.

2. Pregnancy is not easy.

You have to know this one already. Pregnancy takes a physical, emotional and mental toll on both parents, but the woman in particular. Between swollen feet, a growing belly, and substantial weight gain, the physical symptoms of pregnancy can be exhausting, and they're not always something a woman is prepared to go through. Add to that list the various and sometimes incredibly difficult complications that can come in any given pregnancy, and you've got yourself a clusterfuck.

Why is it okay to force something like this on someone? Why does anyone hear this and think "Well, you got yourself into that situation, sucks to suck..." and yet if a person smokes all their life and develops lung cancer because of it, they aren't told "Well, you have to deal with those symptoms, cause you did it to yourself?" Because the POTENTIAL for human life is there? Because something that cannot exist outside a woman's body is there?

3. Pregnancy, childirth, and child-rearing is expensive!

If you really need proof of this one, it's here.

4. Contraceptives are not foolproof.

My aunt has fallen pregnant on both the pill and an IUD. A friend of mine has also become pregnant on the patch. I myself became pregnant when I was 17 on something called NuvaRing (though I didn't have an abortion). They say right on the warning label that they are not 100% guaranteed, and yet many pro-lifers have admonished those who have become pregnant on such contraceptives.

5. Saying "Well, just stop having sex if you don't want to get pregnant!" doesn't work.

I'm sorry that anyone has done themselves the disservice of believing that this will help in any way, shape, or form. Sex is not a necessary part of life unless you're trying to conceive, I will agree. However, if you've ever met teenagers or young adults and told them not to have sex...a strong majority of the time, they simply won't listen. Sex is no longer simply done to create life. Couples may have sex for any number of reasons, including to help intimacy blossom, to strengthen their bond, and just to have fun and enjoy each other physically. So saying "just don't have sex" isn't quite a valid argument to ban abortion. (link)

There are many reasons someone may not be able to access contraceptives, whether it be financial, educational, or the lack of availability in their area. The education on contraceptives, between condoms, the pill, and IUDs, is not comprehensive and needs to be changed in order to allow every human on earth to make the choice for themselves whether or not those options are right for them.

7. The foster care system is messed up.

There's no better way to say it, the foster care system is extensively flawed. There are few requirements to be a foster parent, and they are as follows: (link)

Many other requirements, which include keeping dangerous items out of the reach of children, are only regulated by home visits, which are easily falsified regularly. Many children age out of the foster care system before they are adopted. Many children are placed in group homes. Many people who are foster parents are people just looking for a paycheck. Not all of them are awful, but many are. Changes need to be made before anyone can confidently recommend adoption to a pregnant woman. (link)

8. I care what happens to a child after their mother is forced to carry them to term, against her wishes.

I care that adoptions aren't easy. I care that they're financially difficult for the parents and psychologically difficult for all those involved. I care that the foster system needs to be fixed. I care that a child who is born to parents who did not want children, who do not care for that child, and who cannot afford another option will not have a good life, a life that they deserve. I care that these things are happening every day because a woman is told she shouldn't "murder" a grouping of cells and that she's immoral and should be ashamed of herself (even if she was raped and does not want to face the trauma of carrying that fetus to term). I care, and you should too.

9. This world is becoming overpopulated.

I could talk about this one for HOURS. I recently took a course called Environmental Ethics, in which we learned extensively about the population crisis facing the world we live in. It is now estimated that the world population will inflate to 11 billion by the year 2100, with a 70% chance of continued increase. What does this have to do with abortion? The ability to choose to have a child or to not have a child can greatly influence the population of this world. Simply having the option means that we won't be over-inflated and overfilled by the time those children are having grandchildren. (link)

10. It's none of my business what anyone else does with their body.

I read an article recently in which the author spoke of her pro-life stance due to her religion. I'm all for religion, despite remaining at arms-length with it myself. However, when your religion impedes on someone else's basic rights and beliefs, well, let's just say that they aren't the one in the wrong [read: you are]. The problem I find with people-- in my experience mostly Christian folks-- quoting religious texts at me in order to "set me right" (this goes for many subjects, not just abortion) is that I can quote it right back.

Matthew 7:1-3 King James Version: 7 Judge not, that ye be not judged. 2 For with what judgment ye judge, ye shall be judged: and with what measure ye mete, it shall be measured to you again. 3 And why beholdest thou the mote that is in thy brother's eye, but considerest not the beam that is in thine own eye?

The point is, I have no right to use any of my beliefs to justify forcing them on someone else, and neither does anyone else. It's wonderful to have beliefs. It's wonderful to set guidelines for yourself to life a full and moral life based on those beliefs. It's not okay, let alone wonderful, to force your opinions, beliefs, or religion onto others. This is precisely what radical religious terrorists want to do, to force their religion onto others. Why would anyone think that's a good model to follow?

I'm by no means suggesting that everyone should hold these value... except that I am because it's none of your business in the first place.