You Know You're A Red Sox Fan When...
Odyssey

You Know You're A Red Sox Fan When... 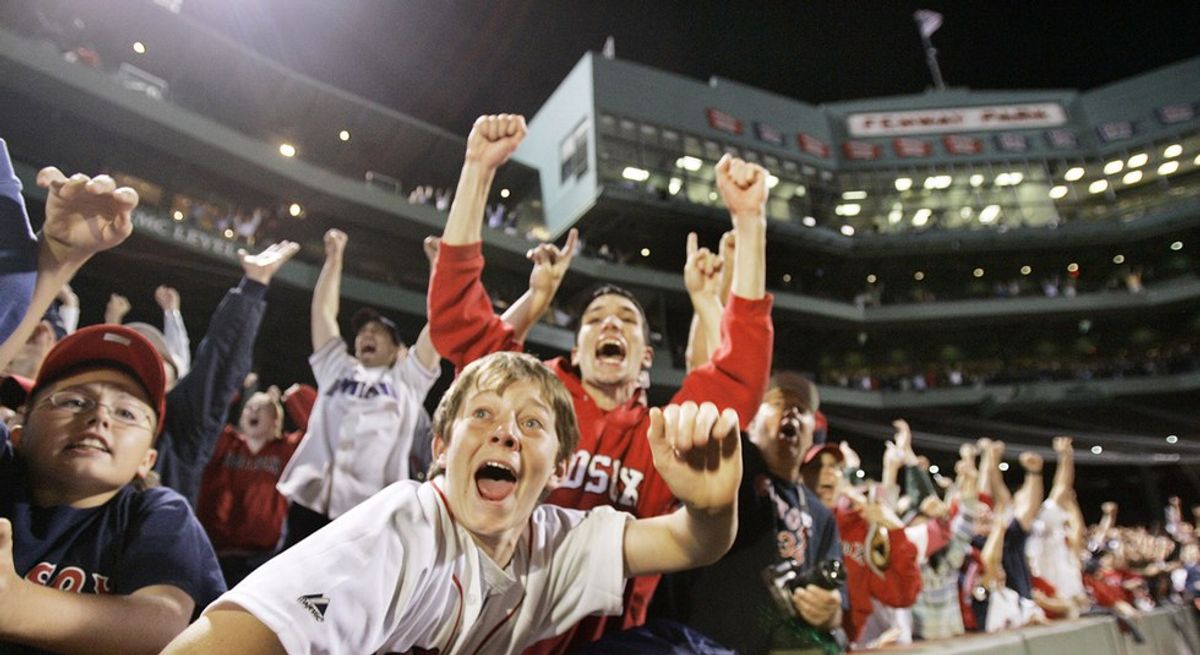 “Why? Why should the bond between a people and their baseball team be so intense? Fenway Park is a part of it, offering a physical continuum to the bond, not only because Papi can stand in the same batter's box as Teddy Ballgame, but also because a son might sit in the same wooden-slat seat as his father.”
-Tom Verducci

Fenway Park is unlike any other baseball stadium...

"Fenway Park is a shrine. People go there to worship"
-Bill "Spaceman" Lee

...Any fans can come to appreciate its vast history, the happiness in the air, the Citgo Sign, the hand-operated scoreboard, and everything about Fenway that makes you feel like you're at home. Fenway is home to the Red Sox Nation.

1. You never believed in curses until the curse of the bambino was reversed in 2004.

Eighty. Six. Years. Later. After selling Babe Ruth to the Yankees, the Red Sox finally won a championship after 86 years in 2004.

I guess we can now forgive Buckner for when the ball went through his legs in 1986 that allowed the Mets to win in Game 6 of the World Series.

3. You know all the words to "Sweet Caroline".

Sweet Caroline
Good times never seemed so good
I'd be inclined
To believe they never would
But now I..."

4. You have a Red Sox room in your house.

And the wall is as close as you can get to the shade of green on the Green Monster.

5. You own a Red Sox garden gnome.

Whether it is a fake beard or the foam beards from the store, you've got one. Or two. Or three?

7. You own a piece of the original Green Monster wall.

Originally built in 1912, you own a piece of history that is over 100 years old now.

8. You use Yankees toilet paper.

The only thing you will ever own that has to do with the Yankees.

9. Your favorite movie is Fever Pitch.

You just wish someone would get on one knee and "propose" to you with a Red Sox ticket to go to a game with them. Best story about the Red Sox and love.

11. You know what "Yaz" means and how to pronounce Carl Yastrzemski's last name.

Pronunciation: yuh-STREM-skee. Get it right!

Rain or shine, you've gone on at least one tour to see Fenway Park from the inside-out. Sitting atop the Green Monster, touching Pesky's Pole, and seeing inside the box offices and walking the field, you saw it all.

14. You name your child or pet after a Red Sox player.

And dress them accordingly.

15. You've yelled "Yankees suck!" even if the Red Sox weren't playing the Yankees that day.

We've all done it.

16. You own more Red Sox apparel than you can count.

Sweatshirt? T-shirt? Sweatpants? Slippers? You name it, we got it.

A beach and poolside essential.

You may get squished in the process, but it is worth it!

19. You're always keeping updated on games, whether you are there or not. Odds are you have the "MLB at Bat" app on your smartphone.

Whether at work or class, you know the stats and score to the tee.

20. You've seen the trophies in person for yourself.

And it's a must see.