If You Hate 'Harry Potter and the Cursed Child,' You're Wrong
Odyssey
CurrentlySwoonLifestyleHealth & WellnessStudent LifeContent InspirationEntertainmentPolitics and ActivismSportsAdulting
About usAdvertiseTermsPrivacyDMCAContact us
® 2023 ODYSSEY
Welcome back
Sign in to comment to your favorite stories, participate in your community and interact with your friends
or
LOG IN WITH FACEBOOK
No account? Create one
Start writing a post
Entertainment

If You Hate 'Harry Potter and the Cursed Child,' You're Wrong

Only true Potterheads will understand. 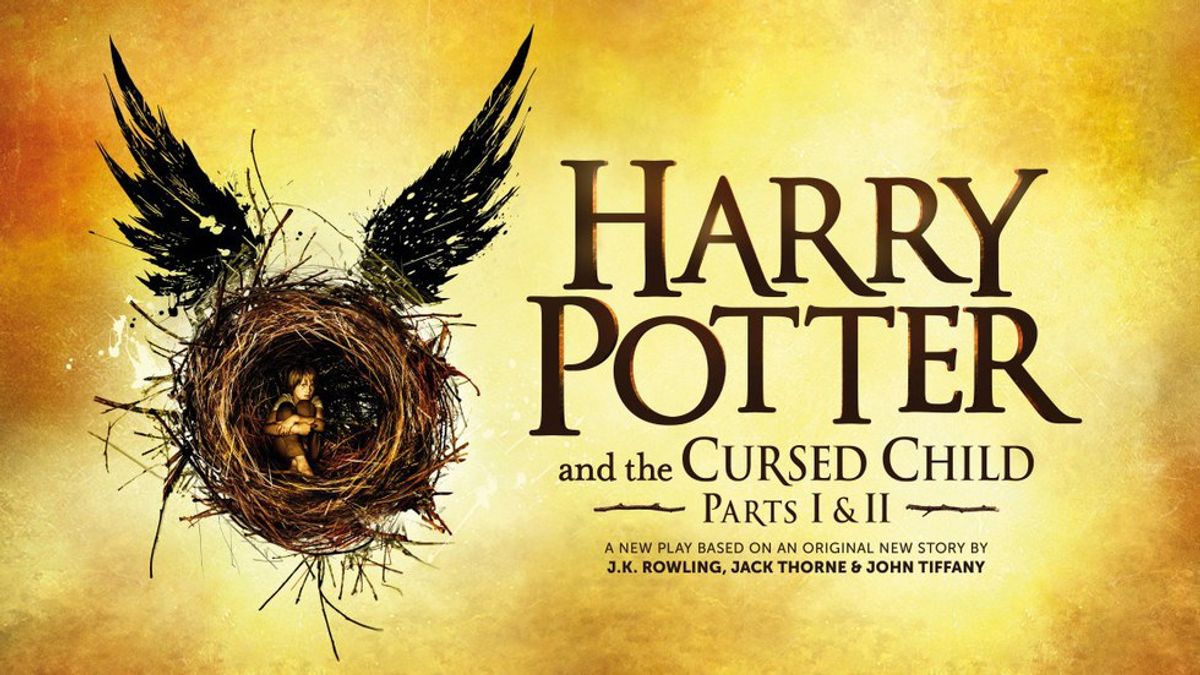 In 2016, you would have literally had to live under a rock for the past twenty years if you haven’t heard of the Boy Who Lived. And, ever since July 31 st of this year, the only way you wouldn’t have heard of J.K. Rowling (arguably the best writer in the world not to mention the best person) and her latest installment of the worldwide favorite, is if you had been living under a rock under an even bigger rock.

On the off chance you haven’t, let me take you back to June 1997 when Harry Potter and the Sorcerer/Philosopher’s Stone was released; when the world got a glimpse of a magical place called Hogwarts, and the words from a book leaped off the pages and into the hearts of millions. Since 1997, we were blessed with six more books, eight bloody brilliant films (with the exception of Order of the Phoenix, but that’s just my opinion), and dreams of grandiose adventures, beautiful, mythical creatures, and hopes of best friends like Harry, Ron and Hermione.

So, when the goddess of literature herself told us – still postpartum following the traumatic ending of the movies – she was working with playwrights Jack Thorne and John Tiffany on a play picking up right where the last book/movie left off, the world went nuts. Thus, Harry Potter and the Cursed Child was born. Our hopes and dreams lifted off into the heavens like Buckbeak when Harry and Hermione freed him from his chains. (If you don’t know who Buckbeak is, I suggest you stop reading now because you’ll only embarrass yourself.)

The play, written in two parts, debuted in London’s West End at the beginning of this summer, and for many, it would probably be easier to get tickets to Hamilton, because the show started selling out instantly. Those who got to see it were ecstatic. They loved it, lived it, breathed it. Those who didn’t get to see it – myself included – whined like little jealous babies. They begged and begged until Rowling had no other choice but to release the stage play as its own novel, simply because we couldn’t help but get our knickers in a knot.

On Harry Potter’s birthday this year (July 31st, in case you Muggles missed it), people all over the globe raced to wherever books are sold at midnight (You know, because Ron’s mum would always say midnight) like it was 2008 at a friggin’ Twilight movie premiere, only much more important. Folks then sprinted home, ready to experience the same feeling they felt ever since the first book was released back ’97. Some readers finished it in a matter of hours, others in just a few days. This thing took off like Pokemon Go, with only one problem.

Not everybody liked it. In fact, some people took to Twitter and other various forms of social media to hate on it.

Short disclaimer: A lot of people thoroughly enjoyed the book. I’ve talked to many Potterheads who have and always will love Harry Potter and all it stands for. But there are some who choose to be rather difficult.

Difficult people: this one’s for you.

While I’ll admit that it isn’t quite the same without Rowling’s beautiful imagery, symbols and subtle nuances that can’t be found in dialogue, that does not mean it is bad or it isn’t worthy of being classified as legitimate as the previous seven.

Using the argument, “Well, it’s all dialogue, there’s nothing else,” is the dumbest statement I have ever heard. Would you like to know why there is only dialogue? Because it is a play! Don’t you remember having to read Romeo and Juliet or Macbeth in high school? Those are two other great pieces of classic literature that are – you guessed it – plays!

Of course it doesn’t read like the originals! It is nothing like the originals! There are new characters, new plotlines, a new villain (spoiler), and it isn’t even written in the same format. It also wasn’t just written by J.K. Rowling; she had two other people helping her turn it into a play. Speaking of the Twilight Saga, if you want to know what fan fiction really looks like, please just take a look at 50 Shades of Grey. (Don’t even get me started on that one.)

The stage directions, the scene set-ups, the pauses…All of these things are meant to be seen and not read. Does that mean it isn’t good? Of course not. Does that mean it shouldn’t be dubbed an “authentic” Harry Potter book? Double of course not. But we asked for it; we kept begging and pleading with them, saying: “Oh, Joanne, pretty please give us the play in book form. We can’t take it anymore!” We did this to ourselves, friends.

So, let me just break this down for you a little bit more:

Point 1: If you hate on Harry Potter and the Cursed Child because “it isn’t the same” or another silly reason like that, then you’re wrong. You might as well delete your Pottermore account now because you aren’t a real fan. If you hate on it because you genuinely don’t like the story and you thought Rowling should have ended it where she did, then you can keep your opinion. (Although, that’s also kinda our fault because we kept begging her for another one, and apparently Fantastic Beasts and Where to Find Them just wasn’t enough.)

Point 2: We asked, she delivered. It’s still got the whole crew: Harry, Hermione, Ron, Ginny, McGonagall, Neville, Luna, Draco. It’s still written by our beloved Ms. Rowling. It’s still Harry Potter. Take it for what it is, and be grateful. And when they decide on a playhouse in New York City, go see Harry Potter and the Cursed Child on the big stage.