This World Has No Place For White Nationalism
Odyssey

This World Has No Place For White Nationalism

Nazi's and company need to quit while they are ahead 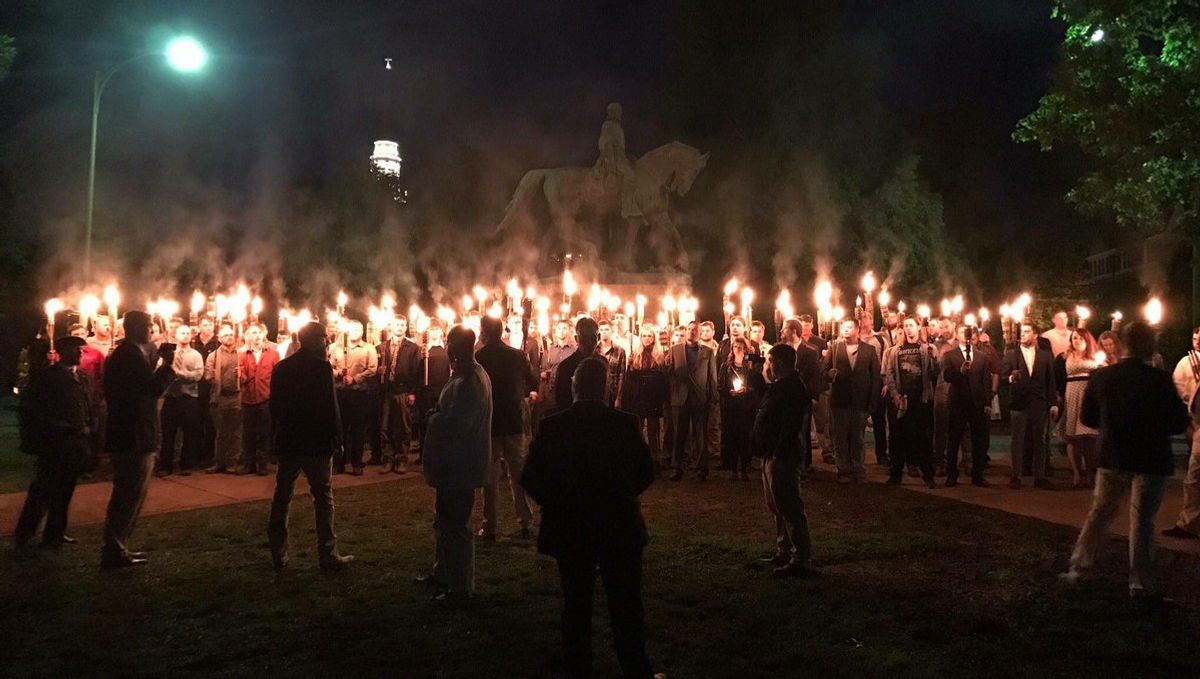 Hundreds of white nationalists marched in formation, heavily armed and dangerous. This modern day rogue militia comes in many shapes: Nazis, KKK, skinheads, the alt-right and neo-confederates, among others. These groups are all united by a singular vision promoting hate, racism, and bigotry. Fear is their intent, violence is their means to spread it, and like the best villains ever written, they think their beliefs are righteous and just. I am sick and appalled by the events that occurred in Charlottesville, Virginia, on August 12. This should have never happened in America in 2017. But it did, and here we are.

First of all, anyone defending the white nationalists needs to stop, now. I don’t care if you’re ignorant of the context, have similar beliefs, or if you’re just trying to be politically correct. I don’t even care if you want to make the first amendment argument. The white nationalists came to Charlottesville looking for trouble. Nobody peaceful shows up to a protest, armed with poles, shields, and guns, chanting hate speech. The neo-Nazi symbols, the homophobic slurs, the racist and anti-sematic comments are all forms of attack on specific people. The point of freedom of speech is to express your opinion freely, without restraint and censorship, but not at the expense of other people. There is simply no moral high ground to support otherwise. Freedom of speech should not extend to racist symbols and talks of hate, period.

People who have taken a passive stance or have just dismissed the whole thing altogether are also wrong. Not calling the white nationalists out gives them a pass to keep doing what they are doing. As an individual, I want to stay as neutral as possible, so I understand where some of the undecided people are coming from (we have enough to deal with in our daily lives as it is). We, however, can’t stand by silently when future incidents are bound to occur. We have to call it out. President Trump may have gloriously failed at doing this, but that doesn’t mean we have to.

But the arguments still continue. Many claim that the counter protesters were just as violent, if not worse and others would like to blame the whole incident on them if they could. I understand the counter protesters did their share of the fighting. No matter what argument you make, it was the white nationalists that escalated things. It was neo-Nazi James Alex Field Jr. that decided to mow down counter protesters with his car, killing Heather Heyer and injured several others. I don’t care how you try to spin this with alternate facts, differences of opinion, or absurd Alex Jones conspiracy theories. They murdered a person with a car and then tried to flee the scene. That’s a hard fact to twist.

Many would like to think that were living in a world we’re above racism, intolerance, and hatred. But the only thing that has changed is how it’s shown. Back then it was out in the open, social mores for some and true gospel for others. Nowadays it’s behind closed doors, in private conversations, and specific circles of trust. It lingers in an institutionalized system, hidden within a softer message or behind a smile. When it does manage to seep out, it’s simply rebranded to be socially acceptable, often exploiting freedom of speech and white privilege. People may be more subtle at hiding their hatreds but it’s still there, like gangrene, eating at us. Charlottesville as of late was the exception; it was loud, crude, and volatile.

As for the fate of confederate monuments, the whole point of the rally, they belong in a museum (with the proper context attached).I understand, as a minority, that not every single person who marched with the White Nationalists was an extremist. Not every white person who flies a confederate flag is automatically racist (I’ve known a few). Not every alt-right protester is as self-entitled as David Duke, egotistical as Richard Spencer or sociopathic like Christopher Cantwell. But for those who are thinking that this will go away, stop it now. This is just the beginning. Trump’s tenure as president has rejuvenated white nationalism and fascism, with more supporters than ever crawling out of their rat holes. Even with each passing year as we become more inclusive racism is always an inevitable roadblock.

I can only hope that everyone will learn from the events of Charlottesville because it’s only going to get worse. For those on the side of progress, please be safe and keep fighting the good fight. For those who are not sure where they stand, keep discussing it and do your research. Research is important because there are a lot of different news outlets, opinions, and fake news out there. For those who want to make a difference, but don’t know how, keep trying. Try donating to an important cause, writing letters to your state representative, or just help someone less fortunate than yourself. Be persistent and find a way; nothing is accomplished overnight.

As for the white nationalists, they need to heed Terry McAuliffe’s words and go home. There will be no ethnic cleansing, no absolute white supremacy, and the confederate south will never rise again. The only thing they have is a broken status quo they are desperately trying to maintain. It can’t last forever, though. No matter how much more outspoken, vicious, and violent they become their mission will ultimately fail. If they want to cling to their self-entitled views and hatful beliefs like it’s a diseased safety blanket, let them. But leave everyone else out of it because the world will be fine without you.