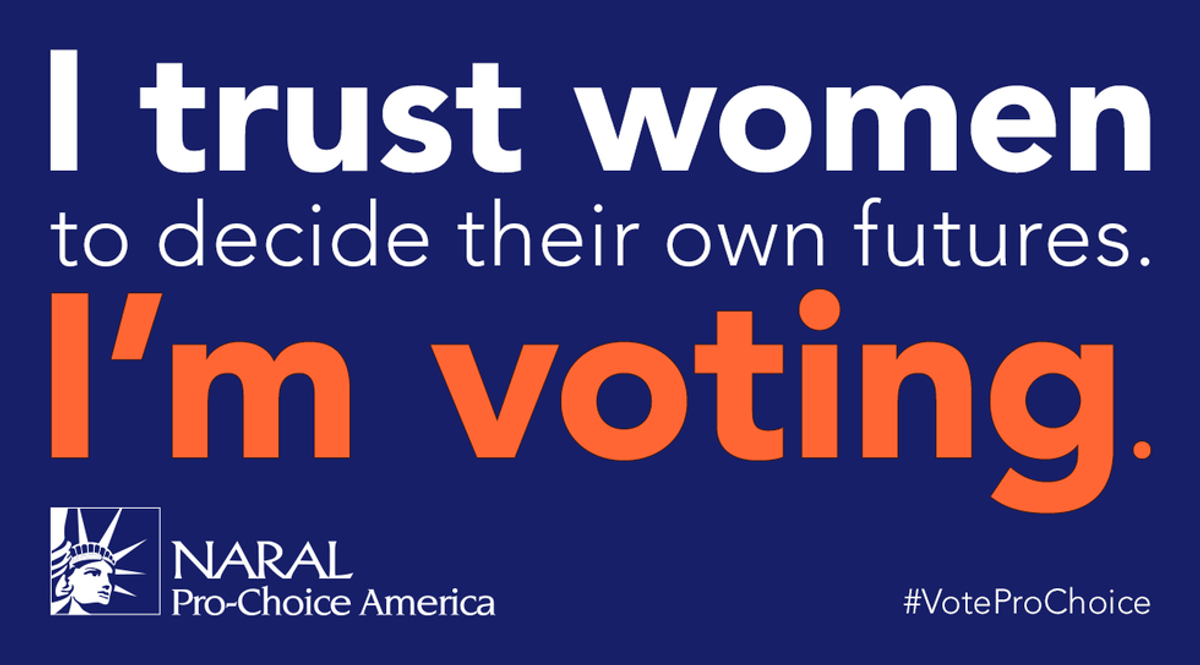 Women don't need you to trust them. In fact, women don't need anything other than for politicians to stay out of their business... and their vaginas.

I fully support abortion rights and access for women and non-binary people. The choice to have an abortion is deeply personal and should be left in the hands of only those seeking the procedure. Women and GNC folks know what is best for themselves and their bodies. NARAL Pro-Choice America is an organization making great strides in the fight for abortion rights and access. Recently, I have seen many NARAL advertisements about "trusting" women to make their own choices. This sounds really progressive and pro-choice until you think about what trust really means.

Trust has to be earned, which is where the problem begins. Trust is a two-way street, in which one party places confidence in the other. Trust can be taken away, or not given at all. One has to prove that they are trustworthy to have others trust them. Should women have to earn access to their own bodies? Should women have to prove that they are capable of making decisions for themselves? I don't think so. Thinking about the language we use to describe social systems is important for the purposes of dismantling false or oppressive beliefs.

Systematic oppression is reflective in our language. The roots of misogyny run deep, so deep that it can be hard to understand why "trusting" women is inherently misogynistic. Not too long ago, women in the U.S. could not vote, own property, go to college, have a career, etc. There were a plethora of things that women could not do, especially women of color and GNC folks. Women were meant to be fixtures in their homes, one more thing their husbands owned. Women needed permission to do almost anything that didn't involve domesticity. Telling politicians to trust women implies that permission is needed for women to make their own choices. One does not need permission to act on something for which they already have possession over (i.e. women's bodies). Furthermore, asking politicians to trust women implies they somehow have ownership over women's bodies, which only serves to perpetuate the objectification of women. Women have the right to autonomy. Women own their bodies. Period. Women do not need permission from anyone to make choices about their own bodies, especially not from politicians who have probably never even heard of a clitoris in their lives.

NARAL aggressively fights for women's rights, so why not make that vigor and dedication reflective in the language they use? Women do not want your trust, they don't need it. Women don't need politicians to have confidence in them. Women need the freedom to make their own choices without the influence of false information and without fear of reprisal. The days of asking for permission are over. Civil liberties and constitutional rights are not asked for, they are demanded, they are taken.