I Wore My Divorced Parents' Engagement Ring For A Year

I Wore My Divorced Parents' Engagement Ring For A Year

It served as a daily reminder that there is love...after love. 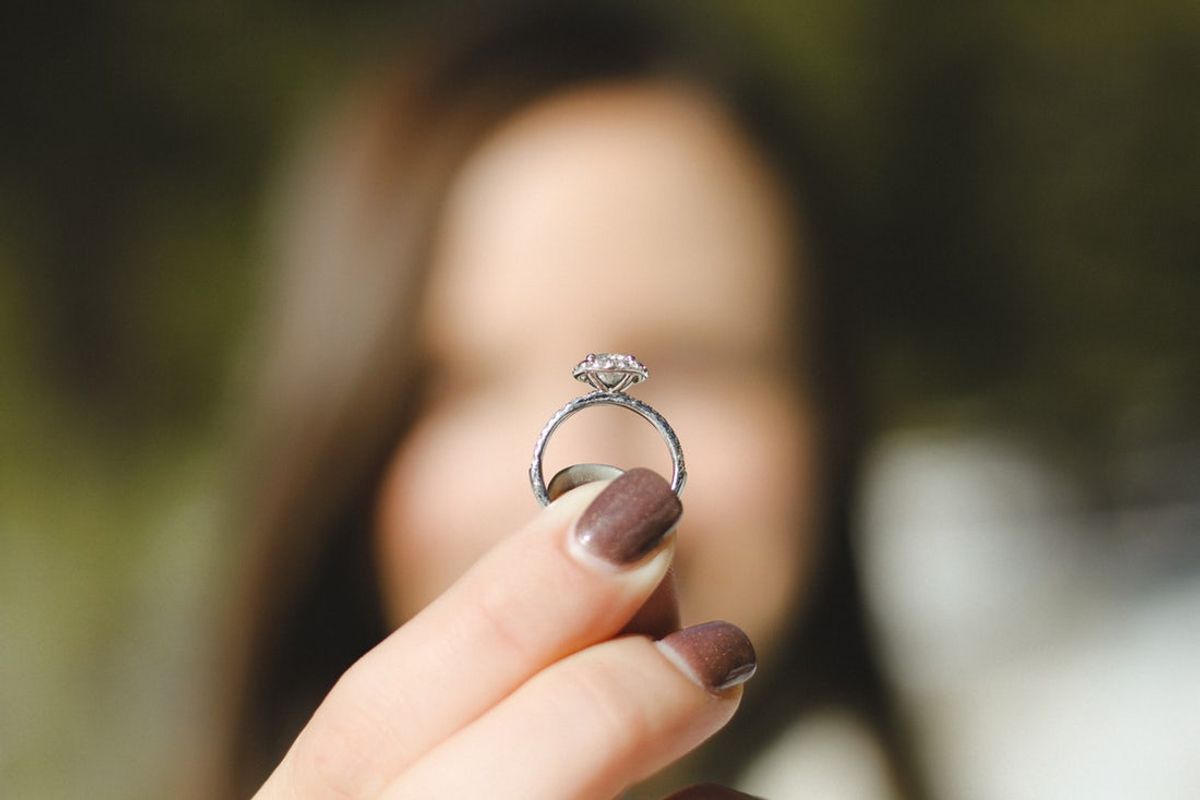 At one point in my life, I decided to wear my divorced parents' engagement ring. That probably sounds so strange, but I wore it every single day for a year. It taught me so many things that I had a hard time wrapping my head around at 17 years old.

When I was 17, I was coming out of an abusive relationship. Maybe that sounds young to you, but it happened. Many people dismissed my story with a wave of their hand and a "You're too young to know." It hurt. Sometimes it still hurts. But it made me stronger. It made me more empathetic to others.

I was emotionally and physically in turmoil at 16 years old right up until I was about 17. I had been told every day for a very long time that no one would ever love me. I was too unstable, too emotional, too artistic, and just too much to handle all together. And truthfully, it pains me to admit I believed that.

But I'm not saying these things for anyone's pity or even sympathy. I'm telling you about these diffucult times, because there are people still going through them. Some people are still stuck in hard times just like these. I'm telling you because it's real, and to plead with you to believe them. Believe the 15-year-old whose heart is aching. Believe the 32-year-old whose heart is breaking. You're not alone.

Eventually, I came to terms with the heartache. This story does have a happy ending, but I didn't always believe it would. I found ways to cope. I thought about my own parents, and what they went through: three kids, 20 years together, and a lot of memories. But they both found happiness. No, not in each other. And that's okay.

It taught me so much more. And I hope they know that. They have found new partners that suited them in their new lives. They taught me that there's more to life than heartache and what I was feeling at the moment. It taught me to move on. To be strong. I admired my parents. All four of them. I can happily say that I have two sets of equally awesome parents.

But sometimes I would forget how to be strong, how to be like them.

I needed a reminder. My mom and dad are some of my very best friends, mind you. When I was younger, my mom gave me the gift of her first engagement ring. The one my dad gave to her many moons ago, when they were right around my age. It made me think of when they were together when I was a child. Then, it made me think about how they are still happy now, even when I remembered the pain of before.

I wore that ring around a chain on my neck, and never took it off. It became my solace, my solid reminder. A lot of people asked me what it was. Where did the diamond ring come from???

I simply said this, "It's my divorced parents engagement ring." After some weird looks I would say, "I wear it to remind myself that there is love after love." Because I knew that the right person was out there for me. I just hit some bumps along the road to them. It was my reminder that everything was okay.

Fast forward three years later, that same ring has since been replaced with my own promise ring, soon to be engagement ring. I met the love of my life. My best friend, who was worth every heart ache, bad day, or tear I'd ever experienced. I'm planning a wedding, building a home, and snuggling up to the man of my dreams every night. And I'm so grateful for that.

My divorced parents' engagement ring still sits on my desk, still a reminder that what I went through was not only worth it...but that I am always stronger than I think. It's difficult, though, when you're 16. Life can be so confusing then. I grew up fast, and learned so much.

But the moral of the story behind my separated parents' ring is this: to not give up hope.

No matter what you find comfort in or dress yourself in, and whether your armor is disguised as a ring, or a tattoo, or maybe just your new lipstick...wear it. Be proud of the scars on your heart. I am, and I found someone who has never asked me to hide them...he's only asked to love them.

I found love after love. You will, too.