Why The 'Final Five' Was So Inspirational
Odyssey
CurrentlySwoonLifestyleHealth & WellnessStudent LifeContent InspirationEntertainmentPolitics and ActivismSportsAdulting
About usAdvertiseTermsPrivacyDMCAContact us
® 2023 ODYSSEY
Welcome back
Sign in to comment to your favorite stories, participate in your community and interact with your friends
or
LOG IN WITH FACEBOOK
No account? Create one
Start writing a post
Sports

Why The 'Final Five' Was So Inspirational

Beyond their amazing talent, of course. 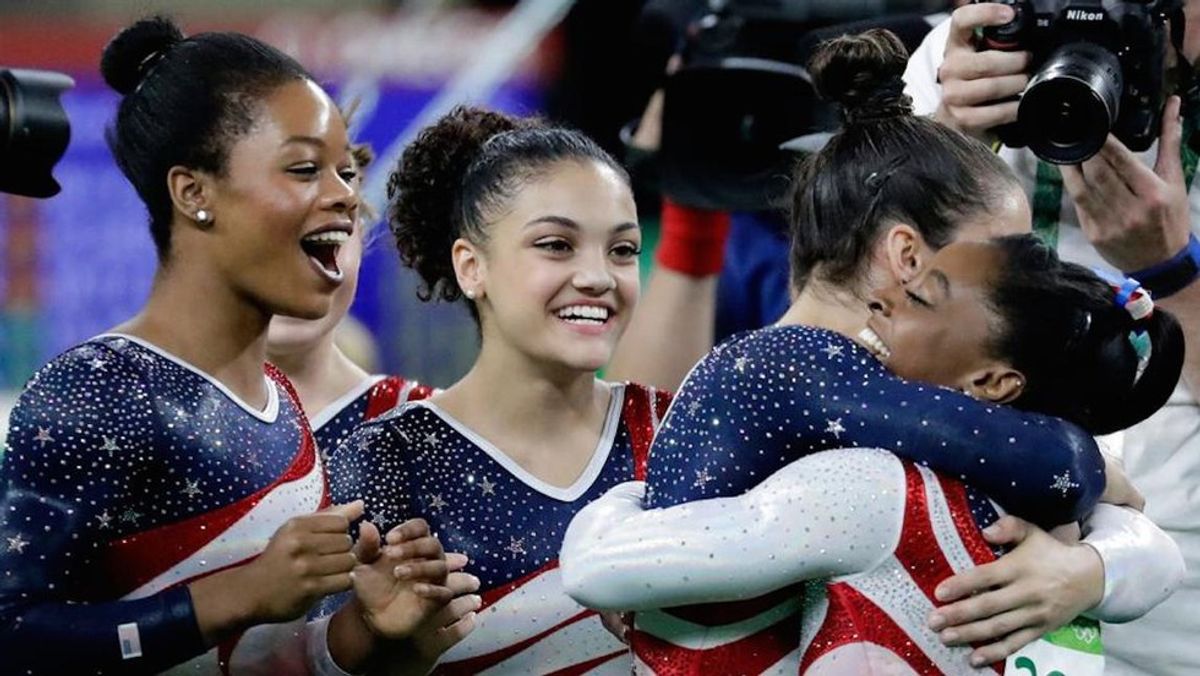 NBC olympics
The U.S. gymnastics team at the olympics made history this year. They won a team gold, all-around gold and silver, and a total of two golds, three silvers, and one bronze medal in the individual events. However, this team is memorable for much more than their success. Each one of the gymnasts on the team is incredibly inspirational. This year, probably more than any year in the past, the team has made me incredibly proud to be a gymnast, and even though the olympics are now over, they will carry on their legacy for years to come. Let’s meet each member of the team and find out why they are so inspirational to gymnasts and fans.

Simone Biles is considered to be possibly the most successful gymnast in the history of the sport. Her gymnastics literally breaks boundaries. She does skills that probably were considered impossible several years ago, and does them amazingly well. Beyond that, she is incredibly humble and has such an amazing attitude. After getting a bronze medal on the balance beam when she was expected to get a gold, many fans were disappointed, but not Simone. She posted a picture on Instagram kissing her bronze medal, and said that anyone would be thrilled to get a bronze medal at the olympics, not to mention she was absolutely thrilled for teammate Laurie Hernandez who beat her out in the event. She is also the second black athlete in history to win the all-around in women’s gymnastics, defying disgusting stereotypes that exist in the sports world. Her hard work, determination, showmanship, talent, and genuine personality make her a memorable athlete for years to come.

Madison was picked for the U.S. team solely because of her talent on the uneven bars, and Martha Karolyi could not have made a better decision than choosing her to represent the U.S. team on that event. She is one of the best gymnasts on the bars I have ever seen, and just flies from bar to bar in a way that I could only dream of ever being able to do. She had a fairly small role in the olympics by only competing in one event, but she never failed to give it her all in every bar routine she performed. Even when she did not win gold in the uneven bars final, she was beyond thrilled to take home a silver. Even with a fairly small role on the women’s team in terms of competing, her personality and sportsmanship played just as important a role in the team as any other gymnast.

Gabby Douglas has one of the most inspirational gymnastics stories I have heard (seriously, go watch her movie “The Gabby Douglas Story”). I have known about her for a very long time because she originally grew up in my home state, and I was so thrilled when she made the olympic team in 2012, not to mention how much I teared up when she went to be part of the gold-winning team and received the gold medal in the all-around—making herself both the first black woman to ever win an all-around gold and the first American gymnast to win team and all-around golds in the same year. Unfortunately, Gabby got an unusual amount of hate this year. Fans have criticized her hair, the fact that she did not hold her hand to her heart during the national anthem at the team awards ceremony, and how she supposedly did not seem supportive toward her teammates. However, she held her head up extremely high and even responded to her haters. Let’s admit it, it must have been hard coming back to the olympics after being an all-around champion and now only competing in one event, but I think she was an extremely good sport about it and she did absolutely amazing in what she did do.

Let’s start by saying that Aly Raisman is 22 years old—competing in an olympic sport that most athletes retire at by the age of 20. However, her age did not hinder her in the least—her coach, Mihai Brestyan, says she is even better than she was at the 2012 olympics. It is rare to see a gymnast who improves so much after their late teens, but Aly definitely did that. She won second in the all-around only to Simone Biles, a.k.a. the best gymnast in the whole world. Aly also is one of the sweetest teammates I have ever seen. She absolutely never was bitter that Simone beat her out, even in the floor, which Aly herself won at the last olympics. She seemed so genuinely happy about getting silvers in the all-around and floor, and about her teammate Simone getting the gold. She said in an article that she knew Simone would probably win everything all along, so she wanted to do the best she could do without trying to beat her out, and she would feel like she won if she got a silver. What I find so inspiring about Aly, however, is her commitment to her Jewish heritage. Jewish people are vastly underrepresented in the world of sports, and Aly defies that stereotype by being one of the best athletes in the world. Not to mention, she has picked Jewish music to be her floor music for both years she has been in the olympics. She stood in support of Jewish athletes who were murdered in Munich. As a Jewish gymnast, Aly is seriously one of my biggest role models. Plus, considering how much better she gets each year, we hear that she may come back in 2020…

Laurie is probably one of the most entertaining gymnasts I have ever watched. As announcer Tim Dagget says, “She keeps the ‘artistic’ in artistic gymnastics,” and I could not agree more. Her smile is absolutely contagious, and it is simply impossible not to smile while watching her perform. Her gymnastics is a delight to watch. She is extremely confident on the beam—which is not easy to do—and I have never seen someone cover up wobbles as well as she does. Not to mention she is only 16 years old, at least three years younger than all her teammates, but just as mature nonetheless. She is also the first athlete born in the 21st century to win an olympic gold medal, and the first Hispanic athlete to make the U.S. women’s gymnastics team since 1984. She is also undeniably sweet. Her dedication and passion for gymnastics are amazing, and there has never been a gymnast who has made me love the sport of gymnastics as much as she has.