What Everyone Should Know About Wisdom Tooth Removal
Odyssey

What Everyone Should Know About Wisdom Tooth Removal

It's scary, I know. So here are a few pointers to keep you informed when you walk in. 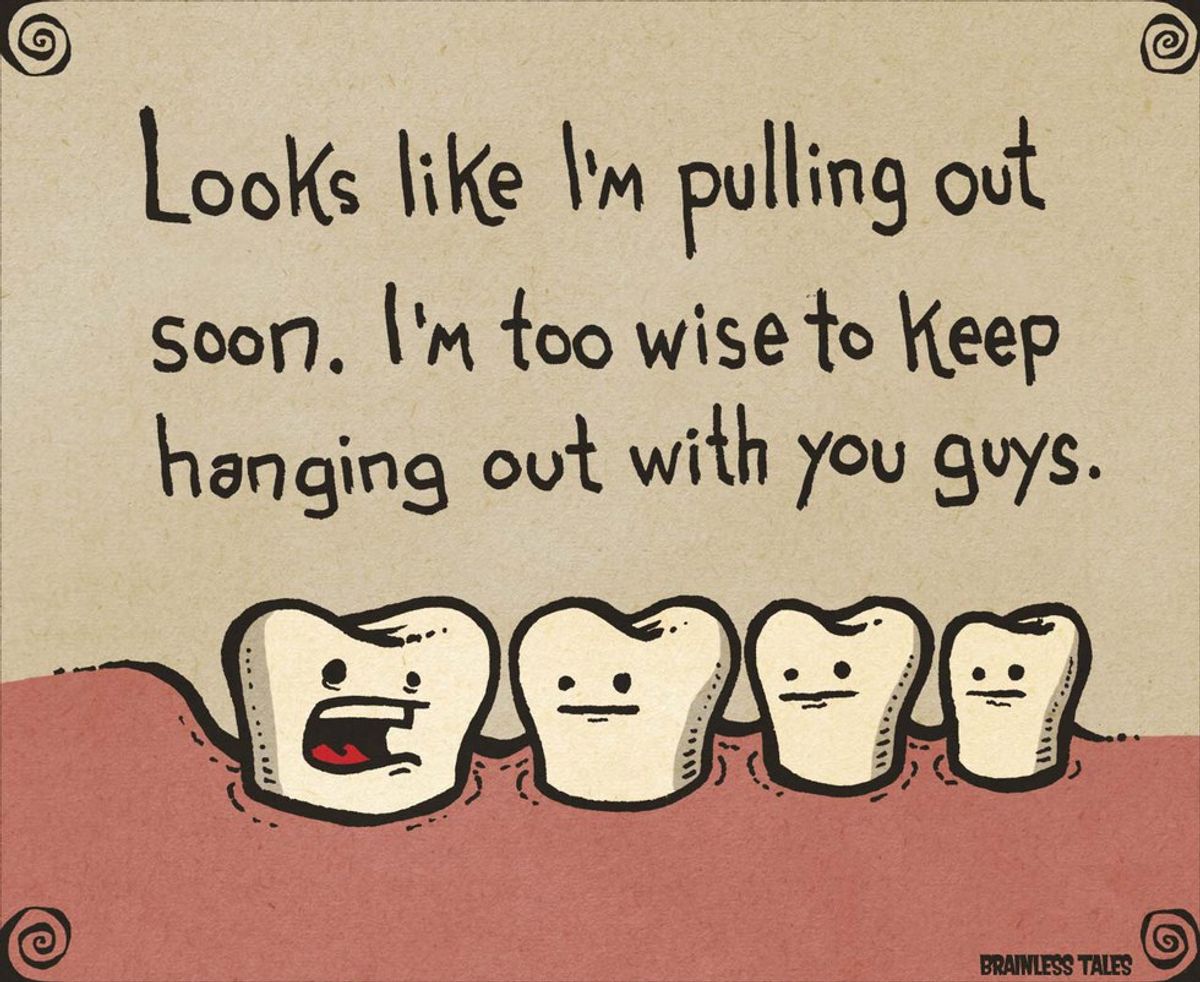 Sadly, there are still many of us who have to deal with the terrifying reality that we have our wisdom teeth growing in.

Though the term “wisdom teeth” is flattering, the main theory as to why many still have them is that we haven't completely “evolved”; originally, humans had wisdom teeth because of our coarser and tougher diets, whereas now our diets have softened.

If you’re younger, around your teens maybe, and you’ve been told that you have wisdom teeth, DON’T wait too long to take them out. The dentists will let you know if they're at a good position to be removed (the roots have to be a good distance away from the nerve in the jaw), and if they are, schedule a removal pronto. The longer you wait to get these bad boys out, the worse it will get, as over time your bones start to harden and hold onto those teeth.

Now a major misconception (thanks to the massive amounts of viral videos) about getting mouth surgery is that you’ll be put under anaesthesia. Guess what? That rarely happens. They only use anaesthesia in worst-case scenarios. It's also common to use it for people who have extreme dental anxiety. Besides that, the most they will do is numb you out.

Numbing solves the pain problem, but not the pressure, and definitely not the noise. From my experience, I was fortunate not to need the drill--they popped out rather easily---but in case you do end up needing it, or if any noise freaks you out, a pair of noise reducing earbuds are highly suggested. Also, make sure the music you are listening to has a lot of lyrics, because it makes it easier to focus on something else rather than what's going on in your mouth.

On a personal level, I know that I encountered two big issues: sugar and adrenaline. Prior to the surgery, just after the numbing, I got light headed. My dentist explained to me that I should have a lot of sugar before going into this. Sounds crazy, right? Won't that just cause me to freak out more? Well he explained that having sugar keeps you together when you're panicked, especially prior to surgery. Though I don't know the whole science behind it, I did learn that you need good blood flow before the procedure.

The other problem I encountered was that, halfway through the surgery, I started shaking. From my head to my toes, I was trembling and clammy. Mentally, I felt fine, yet for some reason my body wasn't in control. They paused, and my dentist told me it was normal and just the adrenaline. My body had gone right into “fight or flight” mode, and was ready to either run or punch someone. So don't be scared if you start spasming--it's normal.

Now after the surgery, you may feel fine for about a half hour or so. DON'T let that trick you. Once you get home, down a Tylenol (or whatever it is you are prescribed) because the numbness is the only thing standing between you and agony. It is going to hurt like crazy for a good 40 minutes, so be prepared.

After that, it’s simple: no spitting or sipping through a straw, and no chewing for the first 24 hours. Don't freak out if you bleeding excessively during that first 24-48 hours, because that's normal. Just try to keep pressure on the gauze to promote clotting, and dampen it prior to get a better fit. Change every 45 minutes, more or less, and if you're really worried about the bleeding after the initial two days, you can use tea bags (tannic acid in tea leaves promotes blood clotting as well).

Now it might say on the paper that you can eat pasta and oatmeal after some time has passed, but if you got through both sides like me, that’s going to be physically impossible, so try to stick to stuff you don't have to chew. Also, don't freak out about brushing your teeth, because it's very important that you keep your teeth clean. Your dentist will probably prescribe you with a mouth rinse, so use that on the second or third day (whenever the bleeding is less excessive).

And above all, just relax! Moving around a lot increases blood flow, so having surgery is the perfect excuse to lay back, relax, and binge watch that cool show you've always wanted to see.