Was Unity Really The Message Of Trump’s State Of The Union Address?
Odyssey
CurrentlySwoonLifestyleHealth & WellnessStudent LifeContent InspirationEntertainmentPolitics and ActivismSportsAdulting
About usAdvertiseTermsPrivacyDMCAContact us
® 2023 ODYSSEY
Welcome back
Sign in to comment to your favorite stories, participate in your community and interact with your friends
or
LOG IN WITH FACEBOOK
No account? Create one
Start writing a post
Politics

Was Unity Really The Message Of Trump’s State Of The Union Address?

Trump's presidential priorities and the guise of unity. 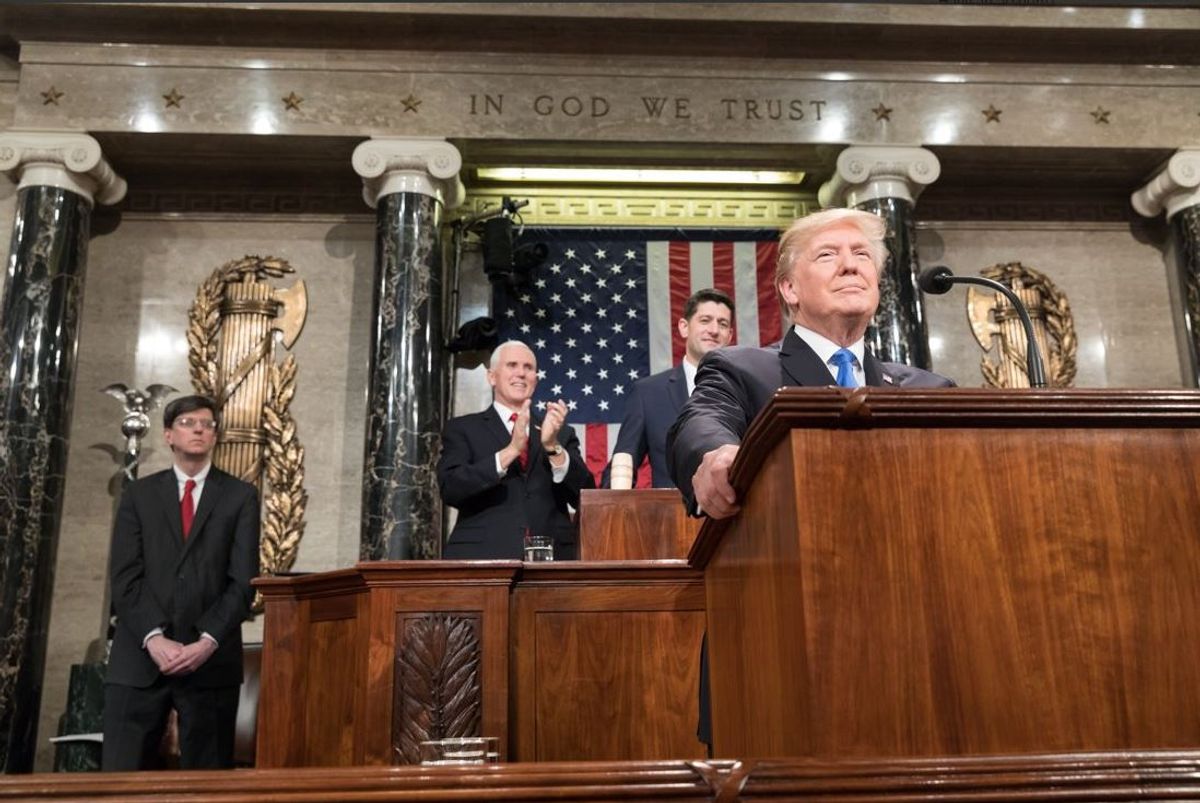 Photo via the White House and DoD

WASHINGTON -- President Trump gave his first State of the Union address of his presidency Tuesday night. Trump delivered the lengthy speech to a mixed congressional crowd of democrats and republicans, and he opened with attempts to emphasize unity within our American Union.

"Tonight I call upon all of us to set aside our differences, to seek out common ground, and to summon the unity we need to deliver for the people," said Trump.

Unity is a subject that seems unfamiliar to Trump, and the comments he made in the opening of the address actually managed to further divide viewers, with at times only half the crowd applauding his statements.

Following the address, many were skeptical about the claims made by Trump and the statistics he used. In an article by the Washington Post, it is proven that many of the figures and statements made during the speech were in fact inflated.

When Trump discussed job creation he claimed, “Since the election, we have created 2.4 million new jobs, including 200,000 new jobs in manufacturing alone.” The article investigates this quote. Using figures from the Bureau of Labor Statistics, it is proven that the actual number of jobs created since Trump took office is 1.8 million.

“That’s the slowest gain in jobs since 2010, which indicates how well job growth was going before Trump took office,” wrote Glenn Kessler, Salvador Rizzo, and Meg Kelly in the Washington Post article.

They added that Trump was able to inflate the claim by using the actual statistics of 2.4 million jobs created since election day, which is true. He then posed these statistics incorrectly, attempting to convince the public that we have seen that sort of rise in employment solely while he’s been in office.

While trying to feign unity, Trump failed to mention any sort of foreign policy until more than halfway through his speech. Focusing so much time on just the United States is significant in terms of the xenophobic and ethnocentric rhetoric that is usually present in Trump’s speeches. Although, much of this explicit language was missing from the SOTU address, it was present symbolically.

After a year full of tragedies and protests, unity may seem like an unattainable goal for American’s. Rather than actually focusing on unity, Trump used his time to convince the public that he has been an exceedingly successful president, and that he is in fact trustworthy. Depicting the idea of togetherness as means of enhancing his own presidential image, and the image of America, seems to be the real theme of this year’s SOTU address.