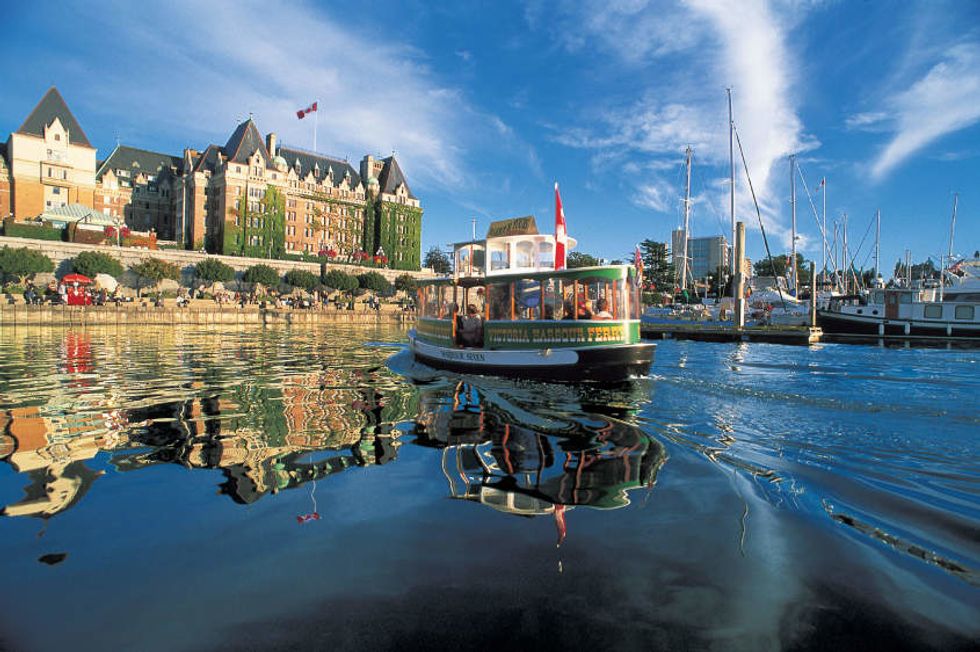 Photo by Vancouver Spectacular by Nature

Who doesn't love Canada? It has great food, amazing people, impeccable air, and well Justin Trudeau. Vancouver of course is a fantastic, innovative city growing by the day. However, in evolving into a first class country, Canada is also home to one of most antique and historical landmarks in the continent. The island of Victoria, named after the late Queen Victoria, gives its visitors a piece of Europe for less flying miles, close proximity, and an unforgettable road trip if you dare to cross the California-Oregon- Washington trail.

Finding a place to stay? How about the haunted Fairmont Empress Hotel?

The Fairmont Empress Hotel is home to one of the most lavish and luxurious interiors. The staff welcomes their guests in elegant tuxedoed attire at the foot of the entrance. The interior contains an old Hollywoodesque eerie style, with tales of ghosts haunting the corridors of each floor dressed in early 1900 attire. The Empress contains one of the best cuisines within its restaurants, and elegant coffee and tea resting places for its guests. The experience of staying at the Empress resembles that of the Beauty and Beast castle.

Walking about in Inner Harbour mid-day, in a cold, rainy environment certainly invites the the need for a hot cup of tea and scones in the very lavish Parliament Building. Within its walls is the many portraits of the tribute of Queen Elizabeth, and ancient European architecture.

Many great cities have a China Town adding to the cities' cultural diversity. However, the China Town of Victoria Island has been crowned as the second oldest and best China Town behind the infamous one in San Francisco. What makes this China Town so unique is the greatness of its buildings and the jewel of culture in it. This China Town is less about commercialism and more about embracing Chinese culture.

What makes Canada so unique its is respect for its indigenous culture. While the majority of the country has grown along with its European influences, people have brought with them the respect for those who lived in the land before them. The Royal BC Museum, offers its visitors a tour of the origins of Vancouver and the evolution of indigenous lands into European colonies.

One could argue they've seen many orcas at Sea World shows, but have you seen one 5 feet away from you, while on an inflatable boat? Probably not. The experience is not only exhilarating, but also something worth adding on you bucket list.

Bastion Square is one that combines European vibes with Canadian pride. It offers alleys of risk pubs, quality coffee and pastries, and the best cuisines you will ever experience. The architecture and small shops are a definite shot for your new instagram post, and the people you will meet are one of the friendliest and interesting individuals you will meet.

Built by Baron Dunsmuir in the late 1890's, this Scottish architecture proves to be one of the most eerie and bone chilling tours in the Island. It has been rumored to contain the spirits of those who habituated the household. The many wooden floors in the building take you a a scene back in time, with the intact items and clothing of the owners. It is a must see attraction when visiting Victoria.

I am in Vancouver.. How do I get to Victoria Island?

What if I told you you and your car could be taken from across the ocean in a humongous ferry? Tourists drive into the port, where a titanic ferry awaits them. All you have to do is drive into the ferry, and climb overboard to enjoy a hot latte and pastry, while the violent Canadian winds push against you. This scenic sail is a must, showcasing small islands and picture worthy packs of forests along the path.

1. Take a heavy jacket and umbrella.. the rain is unpredictable and well depending on the season, it could even snow

2. Make note of the currency exchange, not everyone accepts US dollars

3. Make a list of sights you want to visit, too many, not enough tours

4. Bring tons of energy, get ready to walk for miles

I Visited The "Shameless" Houses And Here's Why You Shouldn't

10 Ways To Make The Most Of Your 2020 Summer If You Live In Carrollton, GA

An Inside Look At The Famous Texas Twang And Its Origins