Vaud And The Villains: A 19-Piece Time Traveling Band
Odyssey

Vaud And The Villains: A 19-Piece Time Traveling Band

Every villain has a story. 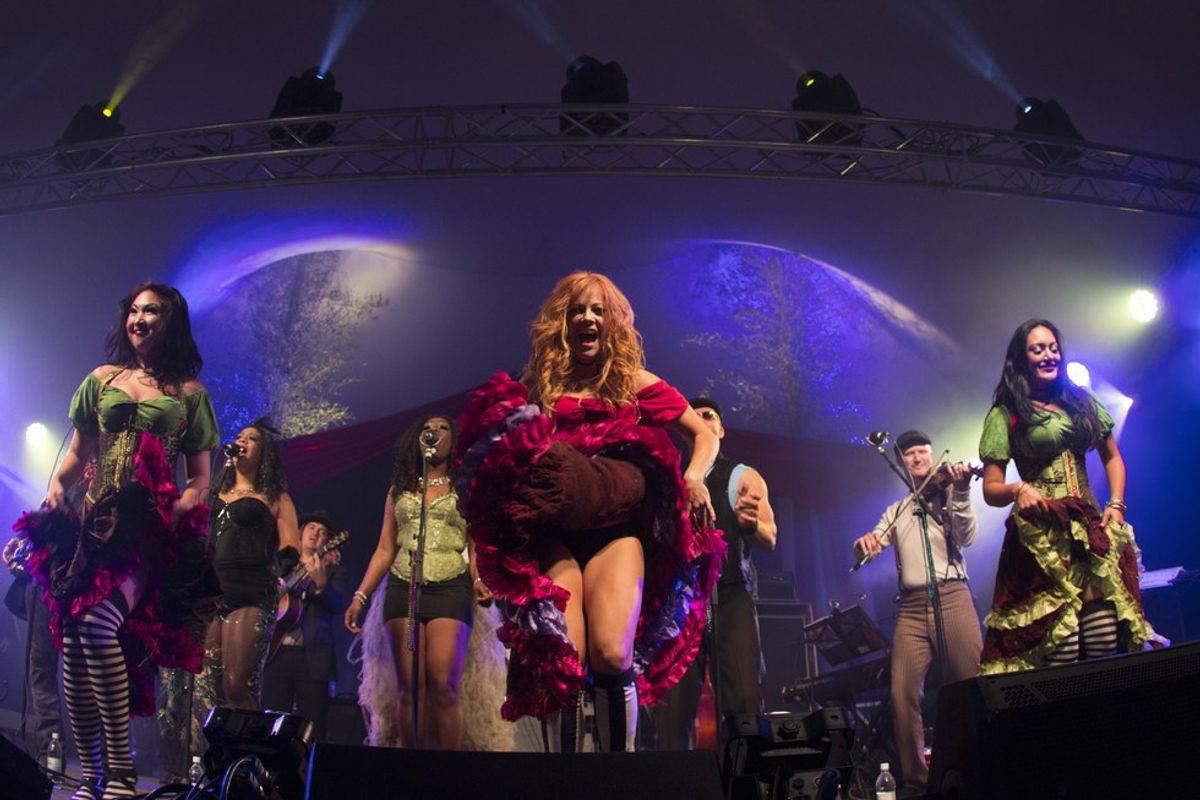 If you were to take a modern band, and then have them time travel to perform in a film noir, you would get Vaud and the Villains - a traveling cabaret roadshow with nineteen members. The band's saxophonist Vaud Overstreet and his wife Peaches Mahoney formed the band several years ago and they have been forming their own genre-bending niche ever since. I caught their performance at Lake Eden Arts Festival (LEAF) in Black Mountain, NC and interviewed six of the members: vocalist Sugar Cherie, vocalist Alabama Blu, vocalist and dancer Peaches Mahoney, dancer Racy Raven, dancer Charlotte Charmaine, and vocalist and saxophonist Vaud Overstreet.

How did the band create its signature performing style?

Peaches Mahoney: Our music and performing style don't really fit into a traditional genre, and that was by design. My husband [Vaud Overstreet] and I started the band eight years ago when we were getting married and we wanted a band, and we couldn't find one, so we decided to start one ourselves. We met with our friend who is a club owner and he gave us five dates. We needed more than just the two of us, so we went on Craigslist and found musicians. The first rehearsal was ugly, but great. Then we played for about six months for almost no money, and we started getting a following through word of mouth.

PM: Creating the stage names is my job, which by the way has become a task that I really hate! When there's a new person in the band, we get to know them through touring because when we go on tour we have way too much fun - we have just as much fun as it looks like we're having. So then I know who they are. I'm like, "Oh, this is your name."

Sugar Cherie: Everyone has a villainous story about them. I'm the madame.

Alabama Blu: I'm the southern belle that ran away from my father. I had nothing, but then I found these guys and they turned me over.

PM: I love history and we read about women in the 1920s and in the Great Depression who ran away. There was this great story of this southern belle whose dad was a very rich person who killed himself. All she had were her pearls.

Vaud Overstreet: We had this idea of an ensemble show. My grandma was a dancer in vaudeville, so vaudeville came to mind, villains was born out of that, so "Vaud and the Villains" happened.

You were inspired by Bruce Springsteen's Seeger Sessions, so how did you go from that folk sound to your current one?

VO: We kind of played it to death - we played it every single weekend. For the first few months of performing we had more people on stage than in the crowd. Then, we got a circus in LA to let us play with them, and they had sort of a film noir and Cirque de Soleil feel. We played those folk songs with them for an entire summer, but we wanted to do more.

What are you working on currently?

VO: We're starting to tour more. It's really costly to get out with so many members, so right now we're able to tour through little stabs of long weekends; five days here, five days there. We're writing new songs all the time, so the next thing to do would be to record them and keep getting our name out there.

PM: We do radio shows too. We just did one in Colorado, it was so fun!

Where is the coolest place you have ever performed?

PM: It was just the two of us and they didn't have stages, so we had to perform on the floor. And she just had a baby a month before.

What's the biggest challenge of having so many members? How do you manage touring?

PM: Everyone is directionless! I'm driving one of the buses and there's ten other guys in it. Everyone is making different hand gestures so I'm like, "what is left and what is right?"

PM: We talk about interesting things and they talk about band camp. Literally, band camp! They're adorable though. We have the best guys.

AB: And tomorrow [October 22] we're heading to Nashville, so that's another five hours.

What has your day at the LEAF festival been like?

SC: It's been a great day. There are so many wonderful people, I love the vibe here, and I think we all agree it's like a big family, just like our band.

AB: Everyone is so friendly. When we go to new areas we don't expect everyone to take to us as well, but they do and they enjoy you, so it's like this transfer of good energy.

PM: Initially I was hesitant about playing the LEAF festival because I wasn't sure if we fit the vibe. But then when I got to meet people I was like 'We're so this vibe!' I loved the crowd, I thought it was a great experience. We had too much fun.

Racy Raven: I didn't expect anything less because I'm a fellow North Carolinian. You guys are always warm and welcoming.

CC: I'm an LA native, so for me to travel outside of LA is amazing. I love being in the mountains, and this fresh air - I almost don't know what to do with it - there's no smog!

VO: There are so many families here at LEAF, there's a warm vibe going on, it's wonderful! Not every band gets to do this. It's really, really, really extraordinary.

Want to catch them on tour? Here are the upcoming dates.