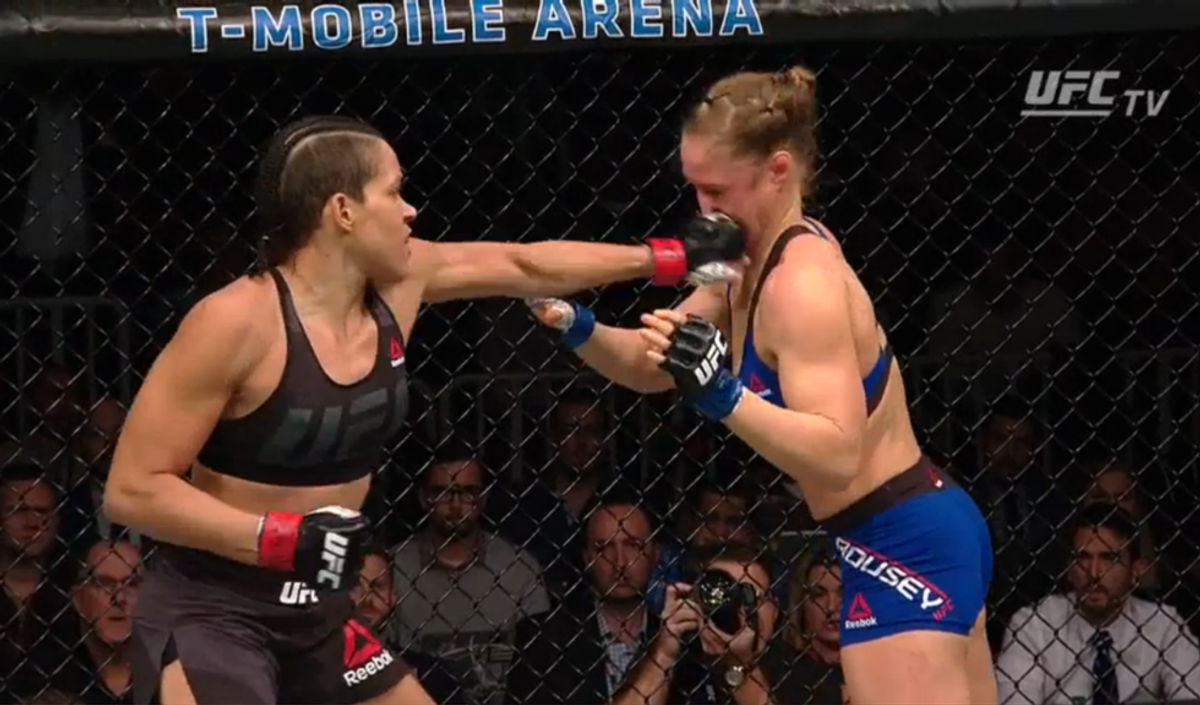 To declare UFC 207 Nunes vs Rousey a tale of redemption is a huge mistake and substitutes empirical combat analysis for a more subjective psychological one. Focusing on the unknown aspects of Ronda Rousey's psychology rather than the known and observable aspects of movement is to miss the point and downplay the achievements of an excellent fighter. The contest between the seldom mentioned champion and the superstar challenger has been framed in such a way that doesn't take into account the fact that Rousey is facing a fighter and that being the best is more complex than Fighter A being better than Fighter B. Fighting is much more complex in mixed martial arts and even in it's simpler components (Tae Kwon Do, Boxing, Wrestling, Jiu Jitsu) there are a variety of skills and tactics that distinguish fighters from each other. To regard one fighter as the best – or even just better – discredits the other by not acknowledging the work they put into the areas in which they excel. Amanda Nunes and many other fighters in the UFC do a lot of things worth taking time to appreciate. Amanda “The Lioness” Nunes became champion because she and her team dedicated themselves to their combative crafts. The Lioness retained her belt against Rousey not for psychological deficiencies in the latter, but because of technical acumen.

The takedowns aren't just difficult because of complexity. They're difficult because the typical Judo style takedowns require you to get hip-to-hip with your opponent. In boxing distance, the wrestling takedowns work well because they require you to grab at the waist or legs by essentially bending over. Judo takedowns require that you fill all of that empty space with your body. An added layer of difficulty emerges from the fact that the hips must be aligned in a very specific way for the toss to work effectively. If the hips are too high, there's no toss (or at least it's a shitty one). If the hips are misaligned and off center, then the toss fails or merely gives your opponent the chance to take your back and out-wrestle you from a position where your limbs are least dexterous and your vision is poorest. When Alexis Davis traded shots with Rousey, the former champ was able to land a hard left hook which dazed Davis and allowed Ronda to clinch. A knee to the mid-section was then followed by the turn into the toss. In panels 2 and 3, we can see that Ronda needs to get hip to hip, but in the 3rd panel, Davis isn't actually being thrown by the hip and is simply being pulled in by Rousey's arm. This move, Harai Goshi, requires the use of the leg to generate leverage and swing the opponent. Ronda uses this toss to set up a classic Kesa Gatame pinning position to land strikes until the ref saves Davis.

Ronda Rousey has been so effective because she's been able to work from the clinch so much more effectively to outgrapple and then outstrike her opponents. In the earlier stages, Rousey had little to no striking ability and the clinch was merely a means of getting the fight to the floor where she could slap on an armbar submission. As she added more striking to her game, she gained the capacity to use the clinch to set up very effective strikes such as the knee that dropped Olympic Wreslter Sarah McMann. Although her striking skills progressed, she never quite became adept at striking at longer ranges and her ability to win fights seems to be contingent on the skill sets of her adversaries and less on her ability to implement her strategy: Rousey only beats women who are not savvy enough to keep the fight at a distance. In the fight against Holm, Rousey was unable to get her hips in the right position because Holm fought at very long distances, didn't stand in front of Rousey by circling away from her, and when the distance was closed, Holm has a tendency to keep her arm in between her and her opponent. This tendency can be seen in Holm's matches with Reneau and Pennington even before she took on Rousey. This was a tendency tactically bred into the fighter from training to prevent takedowns from clinch exchanges. Having the arm inside prevents Rousey from getting a proper takedown and so they essentially fall to the ground as Rousey hooks Holm's left leg in the 4th panel in order to improvise a trip. Despite her skill on the ground, this is a bad position to be in with a black belt in Jiu Jitsu like Nunes - who is also a brown belt in Judo - because even a boxer and novice grappler like Holm is able to use the leg to inhibit an escape and potentially gain a dominant position. Although Holm isn't skillful enough to take Rousey's back, she easily escapes the position and fires shots at Rousey for making this attempt.

Despite having faced an Olympic silver medalist and a multiple time world boxing champion, Nunes may be the greatest athlete and fluid striker that Rousey has faced. McMann may be physically strong and skilled at wrestling, but doesn't have the sort of finesse on the feet that Nunes does. The Lioness is able to keep her balance underneath her, move in and out, and cut tight angles with her feet. And while Holm has the prestige that comes with plenty of head kick finishes and world boxing titles, Nunes' ability to put together fluid combinations (or at least her willingness to do so) seems to be a slight step above Holm's within mixed martial arts. Against McMann, Nunes showed that she could hang with the Olympic level athletes by also finishing her in the first round. The skills that Nunes used more than a year ago to finish McMann were the same ones that helped her retain her title Friday night. Against McMann, we see the front kick to the body, long punches, and tight angles. By using the front kick in the 1th panel and then moves again to force McMann to have to turn once more. Time turning is time not spent striking or initiating takedowns. The Lioness was able to submit McMann in the first round by constantly capitalizing on mistakes and reigning down hard counter punches which left McMann unable to defend herself.

The dominant narratives of this match-up are misleading. To the public, this match was about Rousey's redemption or something of that nature. The casual fan may be told that Rousey is being surpassed in a rapidly growing sport or that Ronda couldn't regain the psychological stability to continue in the combat sport - both of which are probably true, but are grossly incomplete stories. The Champion Amanda Nunes has possessed the right qualities to win this fight for some time; she is an exciting and talented fighter and she's not the only one. Obviously Rousey has amazing Judo and if she surrounds herself with the right people perhaps she can have excellent boxing as well and we should appreciate these facts. Talent in mixed martial arts isn't concentrated in one person and by thinking of things in such a limited sense we focus on a very captivating leaf at the expense of missing a consistently breath-taking forest.