Twenty One Pilots: Music And Mental Illness
Odyssey
CurrentlySwoonLifestyleHealth & WellnessStudent LifeContent InspirationEntertainmentPolitics and ActivismSportsAdulting
About usAdvertiseTermsPrivacyDMCAContact us
® 2023 ODYSSEY
Welcome back
Sign in to comment to your favorite stories, participate in your community and interact with your friends
or
LOG IN WITH FACEBOOK
No account? Create one
Start writing a post
Health and Wellness

Each generation has a voice, is Twenty One Pilots ours? 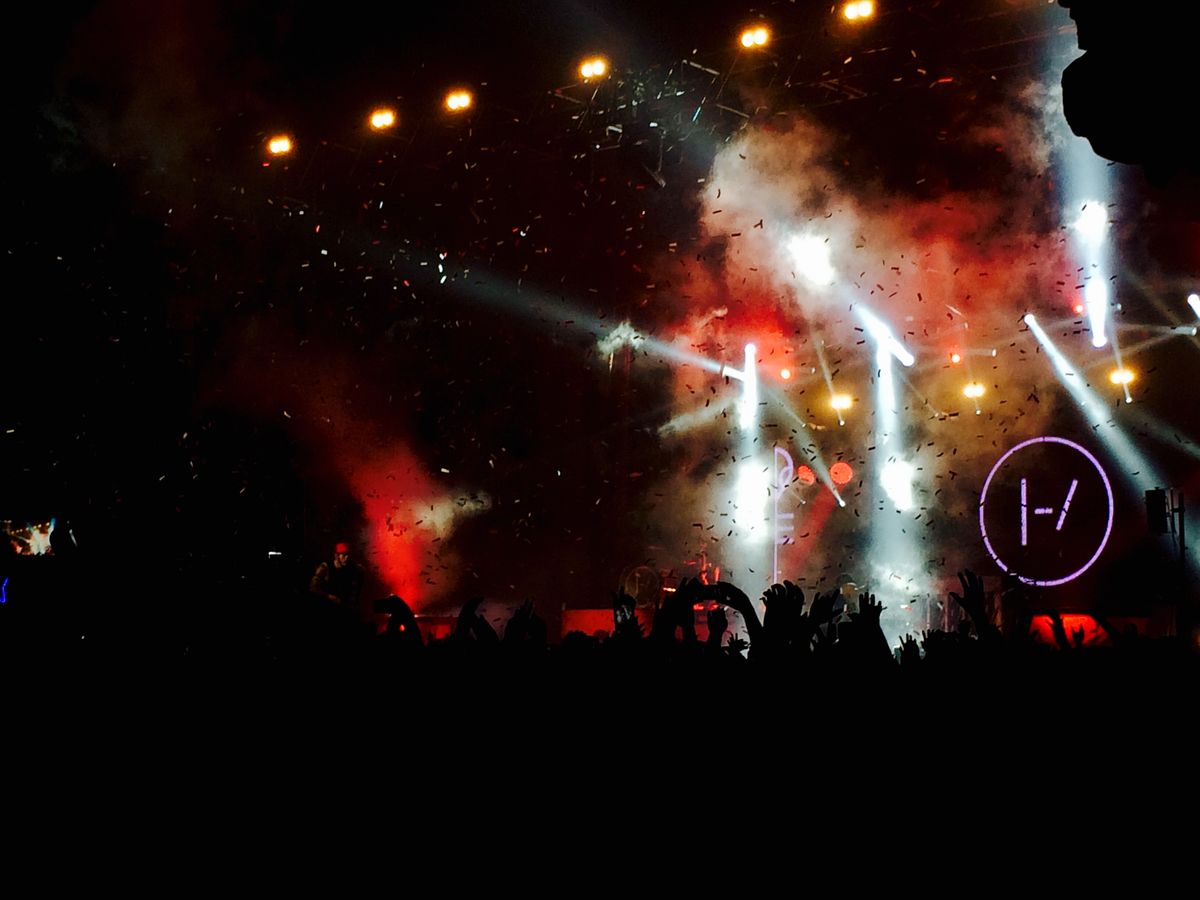 For a brief second- let your mask fall. Each fake smile, each lie that you cower behind is a mask (some more complete than others), and they often hide deeper problems within. Restlessness, irritability, anger- they’re all signs of inner turmoil and warning signs of depression. The reality is that more than 60 million American adults have some sort of mental disorder- their own personal mask (something to hide behind). This staggering number could shed light on why groups that share in this openness and confrontation to the daily struggles faced by those who have these illnesses- anxiety, depression, bipolar disorder, ADD. However, not all people have diagnosed problems, and so many of us are fighting problems without resemblance to a disease. Music speaks to all, because every single one of us have problems in our lives.

To begin to listen, instead of merely hearing, it is important to let your masks down. Find solace in the music, the soft/heavy beats, the fast/slow guitar and bass. Find yourself in the songs. Did you know that one third of all teens have symptoms of depression? Perhaps that is why bands such as Twenty One Pilots are climbing up the charts at a rapid, rapid pace. Twenty One Pilots are an American music duo coming out of Columbus, Ohio made of singer Tyler Joseph and bass player Josh Dun. Singing alternative, indie music and hailed as the voice of the ages, Twenty One Pilots speaks to all that are fighting inner demons- which to be honest, is all of us. Who doesn’t struggle with something? When asked to summarize their first major label debut album “Vessel,” frontman Tyler Joseph says that “We all have masks that we wear.” In each song, from “Car Radio,” which is about being left alone with your thoughts, to “Guns for Hands,” which deals with mass depression and overcoming suicide, the duo behind Twenty One Pilots shows anyone struggling that it’s alright to drop your mask- even for just a little while. The fact of the matter is that Twenty One Pilots is “truly unique” and is able to “blend a plethora of genres and push the envelope on what constitutes pop music.” Twenty One Pilots is popular. No one can argue that, it’s fact. Their show at the Aragon in Chicago for the Nights We Stole Christmas sold out in merely minutes. And the truth about this is that the people of today’s society crave to relate, and to be related to.

With the music of Twenty One Pilots, their daring, progressive stylistic choices and soul binding lyrics, comes a sense of positivity and hope to all who struggle with daily problems. It becomes so easy to relate, because frontman Tyler Joseph has been fighting with bipolar disorder for years. He’s one of our own, and all the millions of young adults dealing with similar issues rally behind him, as the band represents an image of perseverance and overcoming one’s inner demons. Although while Tyler just so happens to struggle with bipolar disorder, his true genius shows through when you realize that his thoughts, his opinions and his music appeal to all of us. Society’s craving to relate to anyone, anything, shows why “Vessel” was so popular. Twenty One Pilot’s lyrics struck home to all, and people couldn’t get enough. On a Weebly fan page, “A Pilot’s Pilot,” fans carry on the work of Twenty One Pilots and “promote the message of dealing with personal demons through art.” This site also gives the opportunity for pilots to share their story. The site is plastered with stories of how the music of Twenty One Pilot’s was pulling them closer to health, Dana C. even says “Your music makes me feel alive, the lyrics make me feel not so alone and it gives me hope that maybe there is salvation for someone like me after all.”[5] This craving can also explain why “Blurryface,” which was released in May 2015, was even more popular than “Vessel.” And while a critic from billboard.com even states that “Blurryface” “ is an album that doesn't quite reach the heights of Vessel,” and even go so far as to call it a “hot mess," fans everywhere are shouting for more from this duo. Even the name “Blurryface” is able to let people in and understand Tyler. “Blurryface” is “an intangible character living in Tyler,” and this character appears in many of the album’s songs as Tyler talks about fighting his inner self. All of us have this in some form or another.

Our true selves are lying just beneath the surface, and all of us fear letting them out. We fear judgement, and we fear rejection for what lays beneath our socially acceptable masks. The effect of Twenty One Pilots and their fearless dedication to their selves show in their music, their shows, and their dedication to their crowd. While performing, the duo that makes up Twenty One Pilots could care less about what the crowd thinks- they’re there to have fun. The crowd just happens to love them. At a show in Phoenix, Twenty One Pilots held the crowd in their palms, as they chanted the lyrics to every single song, and Tyler kept their attention unwaveringly for the 100 minutes they were on stage. A reporter says that “they were all over the place,” which just goes to show how the two pilots were merely having the time of their lives performing for the crowd of people. The concert included backflips off the piano, high energy to the extreme, stage dancers in hazmat suits while the crowd chanted “Laneboy,” confetti cannons and Josh having an extra set of drums let loose into the crowd while he was playing. Tyler, for the entire concert, ran all over the stage, dancing, singing, rapping, and playing his trademark ukulele. Perhaps the reason that fans crave to see them all over the country and the world is because they crave to do exactly what the pilots are doing, and that is to be completely unrestricted and to have no boundaries. Perhaps people crave to let go just like Tyler and Josh, who perform firstly for themselves, never letting anything come in the way of their artistic vision and their music. All people everywhere want to be them- and let their true selves out, let their masks fall.

In the end, society wants to relate- needs it even. As humans, we search and search for music that talks to our inner selves, and reach the part of us that is not obscured by a mask. Music, and its ever healing properties, continue to aid humans in their fight against inner demons. Twenty One Pilots, and their endless stream of relatability and lyrics that tell all of us that it is alright not to be perfect, show all of us that we can take our masks off, and be our true selves. Across the album, “Tyler lets his masks fall, showing he's human,” and shows each one of us that we can do the same. In the end, Twenty One Pilots is the voice of the generation, one that we listen to instead of merely hearing.

Nicole Marie Nigro
Individual Creator
8907
c1.staticflickr.com
Where to start...... Let me start with the cliche that life throws us curveballs and what we do with it is what counts.