Trump supporters might want to hit the books a little harder 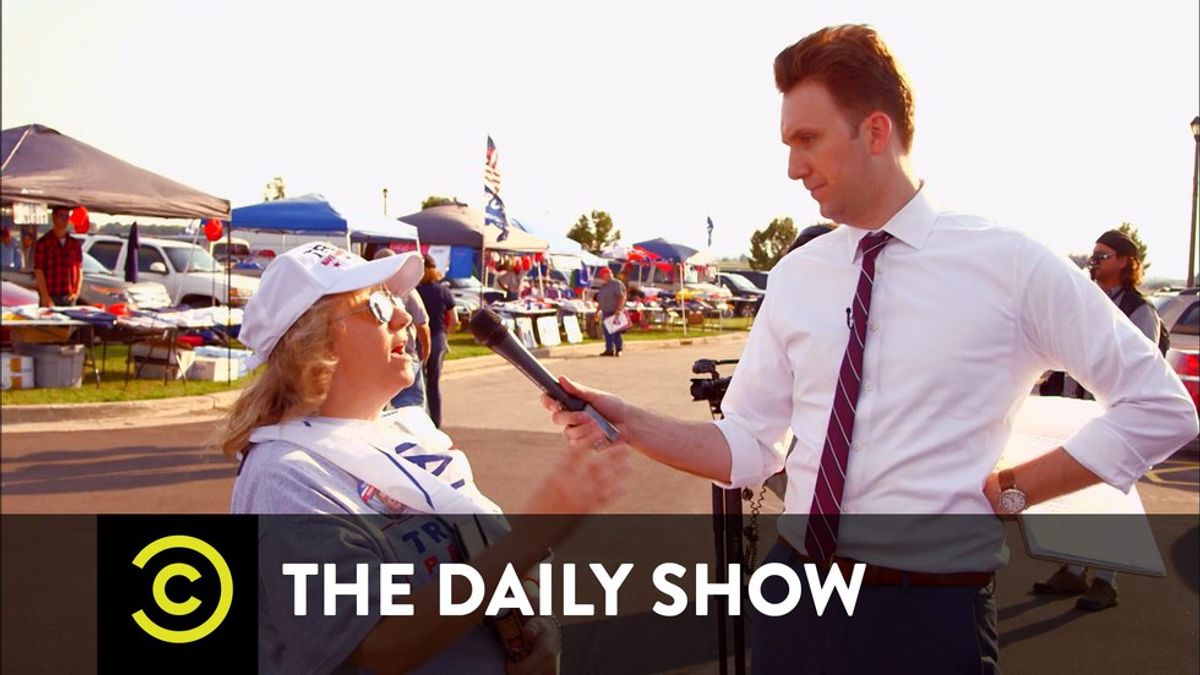 Recently on The Daily Show, which is a television show that airs on Comedy Central, I saw a video where interviewer, Jordan Klepper, went to a Trump rally in Wisconsin and asked random Trump supporters to answer questions and complete the statements. You may be thinking "Oh well it's Comedy Central so it's probably all a joke anyways," and I thought it was too, until I saw how sincerely these supporters were answering the questions. I like to think most of Trump's supporters as people who become bandwagon fans of a football team after they somehow magically win the Super Bowl. Bandwagon fans only know the bare minimum facts about their team, just like Trump supporters knowing a small amount of facts about Trump. Trump supporters seem to have tunnel vision though when it comes to the ideas they are supporting. Here are some of the conversations Klepper had with Trump supporters.

Klepper: "Fill in the blank for me, two men getting married is blank."

Klepper: "Actually the answer is legal in the United States."

Older Gentleman: "Oh it's legal, but I don't like it."

To you older gentleman, do you know what else is legal in the United States? Putting pineapple on your pizza, I don't like when other people do it, but its legal, and as long as it's legal and people are doing it I really don't care. Just as long as I can get my triple cheese thin crust pizza I am fine.

Woman: "It's important to believe in our, you know, have respect for everyone's religion."

Klepper: "So you respect Christianity?"

Woman: "The Presidency is a man's job."

Klepper: "I have women are qualified to be president."

Woman: "No, a female has more hormones, she could start a war in 10 seconds, if she has hot flashes, whatever, BOOM!"

Klepper: "Haven't all wars been started by men?"

Klepper: "Do you think a gay couple should have the same rights as a..."

Klepper: "To the gay couple?"

Woman: "Well, no, but, the regular couple, they work so hard, you know? And the gay couple they want more."

Woman: "Yeah they want equal in that."

Klepper: "And that's too much?"

First off, how is wanting the be equal so much to ask for? At least we weren't asking for an increase in pay or the ability to not pay taxes. All the LGBTQ community wants is equality, to feel apart of the population. Maybe it's just me, but she sounds a little absurd in my opinion.

My last little word for Trump supporters, remember back when your mom would tell you to think about what you say before you actually say it? That is the motto you need to go by, because I am sick and tired of here these contriversal, hypocritical, dumb comments coming out of your mouths.