I Toured A Maximum Security Prison

Seeing a world within the confines of barbed wire. 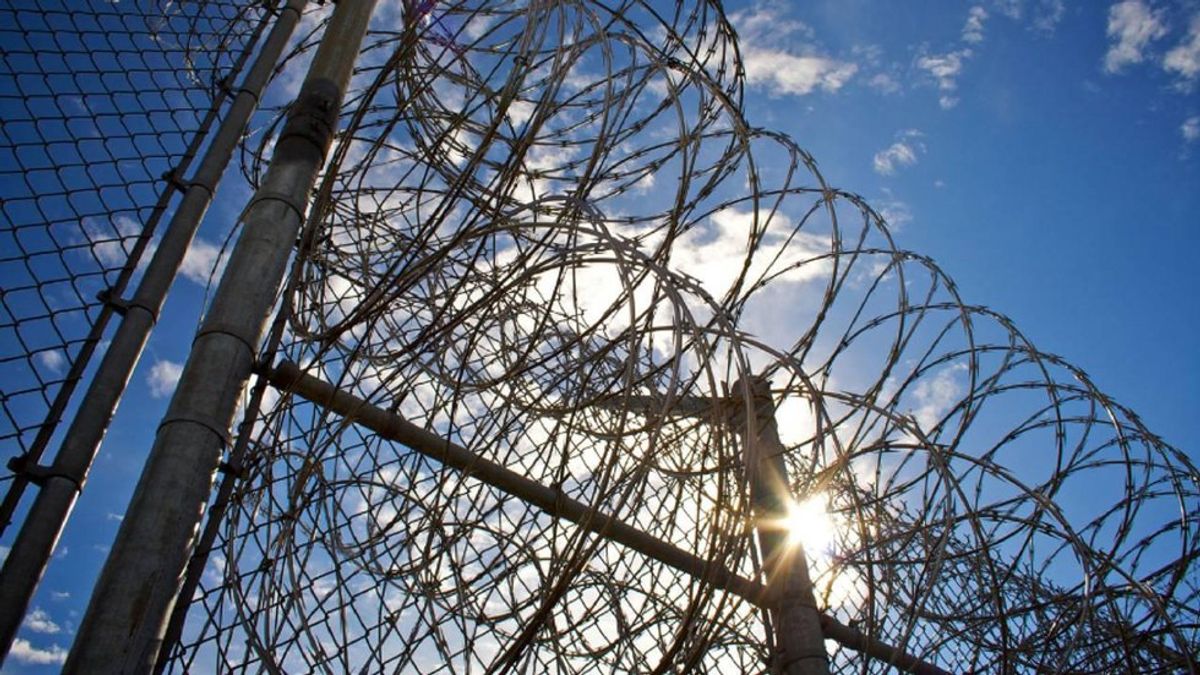 In April, I had the opportunity to tour a maximum security prison that happens to be located a block away from where I attend college. The college takes it's penology class up to the prison annually to give the students a chance to witness what they have been learning about all term long in class. Although my grade in penology was not stellar, I couldn't pass up an opportunity like this. My grandfather worked as a corrections officer for 27 years before retiring. My father worked a year as well before switching over to the police force. I was genuinely curious as to what my father and grandfather have seen and dealt with on a daily basis within a prison system. Ironic that I wanted to go into the place where no one wants to end up, isn't it?

Anyway, I wasn't afraid of going into the prison. I knew I'd be in the same area with real-deal offenders of God knows what type of crime. It seemed pointless for me to be scared because I am choosing to walk into the lion's den. I just trusted that the corrections officers knew how to do their jobs and run the prison without any disturbances. I thought I knew what to expect, but it turned out that it wasn't what I expected at all.

To actually enter the prison, we had to step into several mantraps. I knew what to expect with the mantraps, but I have to admit, going through the mantraps was very intimidating. We all had to squish into a small space (there were at least 20 of us,) have the door slowly close behind us, and wait for another corrections officer to open the door to the other side. The doors moved slowly, making a cryptic clinking sound as it slid along the way, and shut with a loud bang.

The mantraps weren't the only thing intimidating in the prison. Everything was intimidating in the prison. What struck me as intimidating upon leaving the mantraps and entering the prison was the thickness of the air. It had a musty, stale stench that can only be created when one doesn't open any windows in a building. Obviously, the corrections officers are unable to crack a window every now and then, but it felt as if the heavy air was wrapping it's expired arms around me, making my senses unavailable. I couldn't imagine how the corrections officers had to give up fresh air every time they went into work and how the inmates could tolerate the impenetrable air. It made me feel sympathetic to both parties. Once this tour was completed, I am able to walk out of the prison and never come back; these people are permanently stuck in that atmosphere.

The first group of inmates we came into contact with were held in their cells in the reception area. The corrections officers referred to them as the "rowdiest" inmates in the prison. We weren't lead directly into the reception area, but we were able to look in from behind a large barred barrier, where the inmates could see us and we could see them. Unlike a regular cellblock, where the inmates' cells are along the right wall facing the windows, preventing the inmates from seeing each other, the cells in the reception area were present on both sides of the room. The area was huge, and almost all of the cells were filled with noisy inmates. They were all shouting different things towards us and each other, and it all echoed off the empty corridor and ceiling over to where we stood looking in. The corrections officer giving us the tour informed us that an inmate can be held in reception for as long a day to a year.

We walked through all the different cell blocks, where the other inmates were locked in their cells until dinner was served. The inmates were assigned to a particular cellblock based on the crime they committed that landed them a spot in prison. In the honors cell block, some inmates were out of their cells and sitting on a bench close to the window, away from us. They sat still, their hands clasped together in their laps and their heads looking down at their feet. Unlike this prison, many honors blocks were taken away from prisons after two inmates from the Clinton Correctional Facility escaped last summer. The corrections officers instructed us to walk next to the cells in a single file line in between yellow tape on the floor. The cellblocks were a sea of deep green jumpsuits. As we walked past each cell, the inmates came to life and approached the bars that kept them confined to get a closer look at us. They whooped, hollered, and taunted us; our tour must've interrupted their organized daily agenda and brought them a brief dosage of variation to their day. Some inmates tried to speak to us and get our attention. We were instructed by the corrections officers not to answer them. I don't remember all the things they called out to us, but one inmate wished us a Happy Halloween, another counted us as we moved past him, another remarked, "What the f*** are all these kids doin' here?", and another hid somewhere in his cell and shrieked at us in an attempt to scare us. Other inmates in his cell block followed his lead.

What I found the most interesting about the inmates was what belongings they decorated and kept in their cells. I didn't look directly into their cells: prison isn't a zoo and the inmates aren't wild animals. This was the place where they all called home and I wasn't going to disrespect that. I kept my eyes straight ahead and glanced inside the cells as we walked through the cell blocks. The corrections officers told us that some inmates have special privileges for good behavior, which includes what they can keep in their cells. While some inmates just had a cot in their cells, others had office desks, chairs, televisions, and book shelves. One inmate had so many books in his cell that the floor was barely visible. Some inmates hung sheets halfway over the cell door, I'm assuming to give themselves some sort of privacy in a place where privacy doesn't exist. Others hung pictures on the walls, whether it was of their loved ones or of naked women. Every inmate's cell looked different. Their belongings and decorations gave them individuality in a uniformed prison system.

On our tour, we visited the mess hall, the recreation hall, laundry and shower rooms, the commissary, the chapel and several courtyards. We were able to walk past the SHU (Special Housing Unit), where inmates who behave inappropriately are sent to live in temporary isolation. The corrections officers said that the SHU was at maximum capacity, and several inmates who earned time in the SHU had to wait for a spot to open up in a separate cell block. There are a total of 50 spots in the SHU, and they were all occupied. We witnessed two corrections officers escort an inmate out of the SHU, who they referred to as a "frequent flier". The fact that the SHU was full and the prison had "frequent fliers" concerned me: what could these inmates possibly be doing to gain themselves so much time in the SHU? After going on this tour, I learned not to underestimate them.

All together, the tour lasted under two hours, yet it felt like a lifetime to me. Only two hours in the prison, and I felt like I had to be reintegrated back into society. The dense air of the prison stuck on my clothes and lingered in my nostrils when I returned to campus. I stayed silent and alone for a few hours, repeating the entire tour in my mind. I wanted to solidify the prison and the emotions it pulled out of me into my memory. Touring a maximum security prison left me speechless and opened my eyes to a whole new world behind barbed wire. Although the media has morphed society's view of prison way too many times, they are right in the sense that it really is a terribly uncomfortable place to be in. I consider myself fortunate to have been able to see a prison through a tour, not through my own experiences as an inmate.