You won't want to miss any of them. 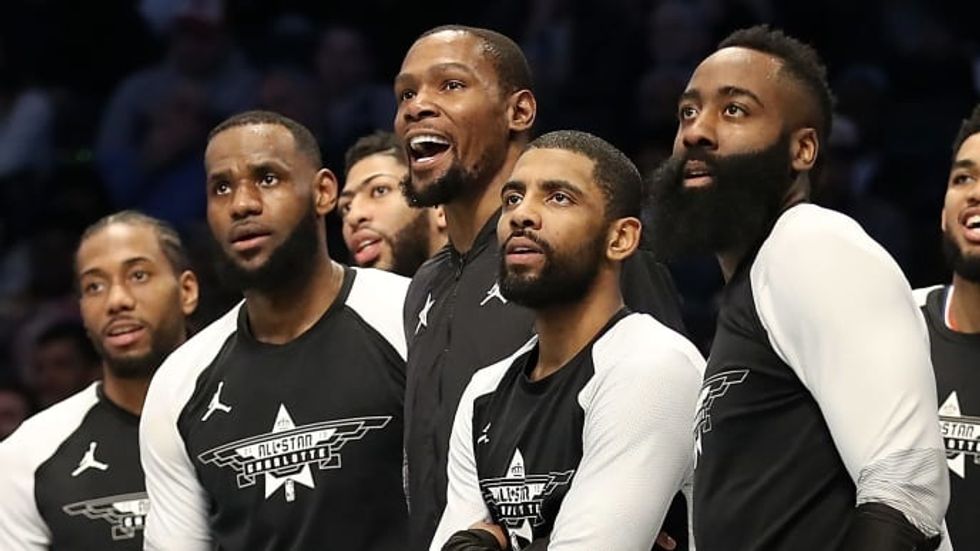 There is only so much time in a week of busy work or school, or both. This week at Villanova is Mid-Term week, but it also happens to be "Prep for Fall Tour" week and "NBA Preseason" week on my calendar. Many of you guys reading this now have multiple full-time tasks which accumulate to much of your free time. Time is an economy in today's world, that is taken up by the busy and fast paced environment we are surrounded by.

The NBA Season has 82 games in a regular season (excluding lockout seasons, such as in 2011). There are 30 teams in the NBA as of the 2019-20 season. 2460 games will be played this year, and it is impossible to watch all, half or even a quarter of them. While many people will only watch their favorite team, some people just enjoy seeing the best of the best compete. As an avid 76ers fan, I plan on watching the games that do not interfere with Villanova's games as well as prime-time match ups. Any Sixers fan can agree that a Lakers vs Clippers game will be more entertaining than watching Embiid destroy the Hornets (sorry Hornets fans).

*Note: I only included Nationally Televised Games on either ABC, TNT or ESPN as those channels are available to everyone in the USA with cable/ internet connection.

This night could showcase the top 4 teams in the NBA, with the Warriors being the best team the past few seasons. Even without Durant, this squad won 73 games and an NBA Champion. The 2 LA Teams are considered to be 2 of the best Western Conference Teams this season, with each having a top 3 duo in LeBron and AD or George and Leonard. This night does not have many side stories, except for just a few hours of solid professional basketball in the middle of the season.

While opening night features Zion vs the Champs as well as the LA rivalry, NBA Opening Week Day 2 provides more entertainment. With ESPN Wednesday night prime time starting with a classic Philly vs Boston opener, the competition is closer than that of the new look Pelicans and Kawhi-less Raptors. These 2 Eastern Conference powerhouses have many questions to be answered: How are the Sixers without Jimmy Butler, will Boston maintain their defensive style with Horford now gone, was Kryie a detriment to the Celtics last season, will Ben Simmons hit a 3? As for the Portland Nuggets closer, all eyes will be on Damian Lillard, as he continues to prove why he believes he is a top 3 point guard in the league. Michael Porter Jr will also be making his debut, as he missed the whole 2018-19 season recovering from an injury at Missouri State. He was once projected to be taken over Deandre Ayton and Luka Donic, and fell all the way to 14 in the 2018 NBA Draft.

The NBA season by this time of the year will only be ramping up. This night is sure to be one to watch, as Giannis and LeBron face off. Many people believe that Giannis and LeBron are the best players in the world, and this night will allow them to face off for the "honorary" title. It will also be the first time Anthony Davis will play Giannis as a member of the Lakers. Anthony Davis's impending free agency in 2020 may land him on the Lakers again; however, the Bucks will for sure pursue the superstar forward/center. Later in the evening, George and Westbrook, teammates on the OKC Thunder this past season, will square off as opponents. George requested a trade to LA to team up with Kawhi Leonard. Following that transaction. Westbrook chose the Rockets over the Heat in a trade where he was able to select his destination. These 2 Western powerhouses will clash in a game of opposing styles. The Rockets are known to be major offensive threats, while the Clippers will be lockdown defenders with 2X DPOY Kawhi and 2019 DPOY Finalist Paul.

Here at Villanova, everyone refers to the shot as Kris Jenkins's 2016 NCAA Game Winner. Everyone else in the area not affiliated to Nova Nation thinks of the Kawhi Leonard shot that crushed Sixers's fans. This night marks the return of Kawhi in the city where there will not be brotherly love for him. It gives a possible look at the 2020 Finals, with the 76ers and Clippers favorites to win their respective conferences. The Celtics vs Rockets closer gives an offensive clash between 2 teams who have little defense but a lot to bring to the table scoring wise. Expect this to be one the largest scores of the whole season, with stars like Kemba, Westbrook and Harden able to each drop 30+ on any given night.

Notable Rivalries: Giannis vs 76ers (Giannis has career high 51 points against Philly 2019), Westbrook vs Warriors (took KD from him in 2016), LA Rivalry, Porter Jr. vs Williams (Both projected to go #1 in their classes, Harden vs Warriors (has never beaten them in the last 5 years)

Debuts/ Returns: Paul George to Lakers home arena (thought to be once going to Lakers in 2017)

Drinking hot chocolate by the fireplace, opening presents with Christmas jams while watching your favorite NBA teams suit up to deliver the best day in the regular season. The amount of highlights and high level performances on this day makes this the start of the season for some casual viewers. This year is no exception.

Celtics vs Raptors delivers 2 top point guards, young star forwards in the making, and much playoff history in recent seasons.

Bucks vs Sixers could provide a potential ECF preview. Giannis and Embiid will duel for top beast of the east.

Rockets vs Warriors has much playoff history and bad blood, as Westbrook has the Warriors on his attack list.

The LA Rivalery strikes again, which may become the best rivalry of the season.

The Pelicans and Nuggets are also probably the best 2 young teams, which is a perfect way to close the night.

If you can only watch NBA Basketball once a year, this is your day.

4 Ways To Deal With Your Anger Issues, No Matter What's Going On

My Mental Illness, While Horrible, Taught Me So Much About Life