After 20 years of running out of the tunnel with the New England Patriots, it is expected that Tom Brady will sign a 2 year $60 million deal with the Tampa Bay Buccaneers. 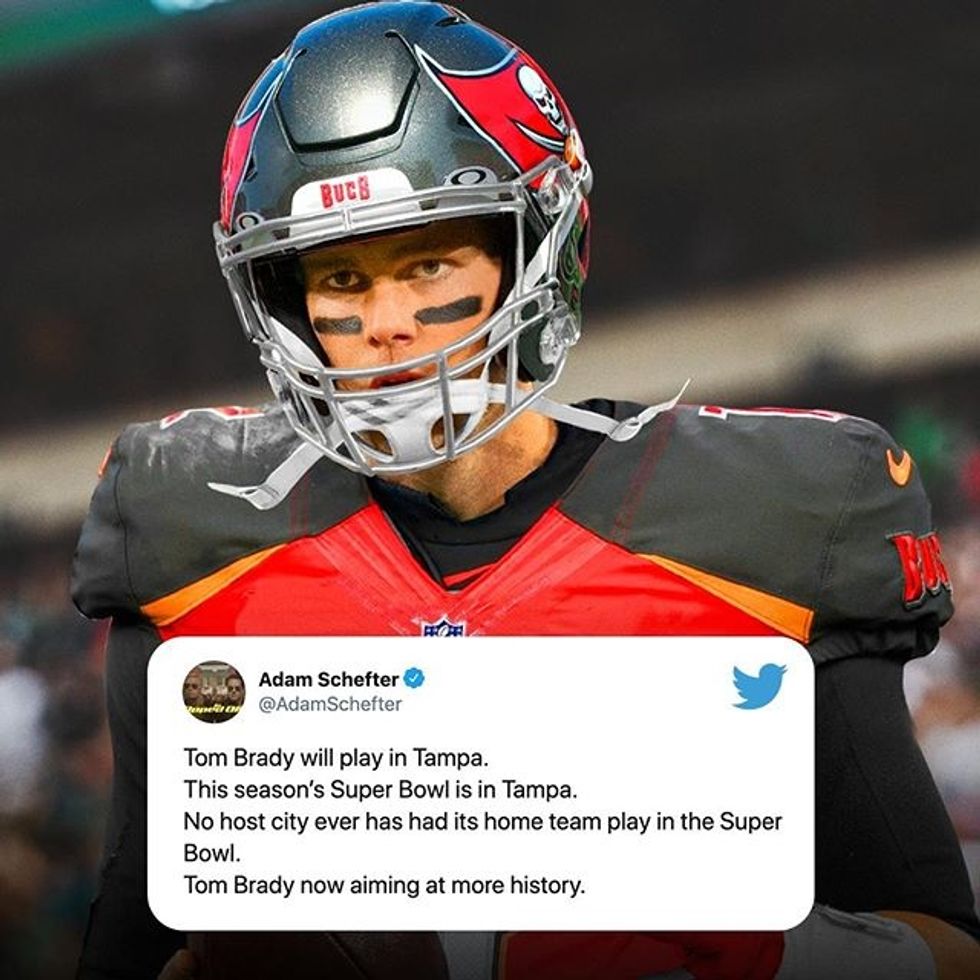 After Drew Bledsoe went down with a torn ACL, unknown 6th round draft picks out of the University of Michigan, Tom Brady, came into his first NFL game. 20 years later, Brady and the Patriots had won 6 Super Bowls, been to 9, and won the AFC East Division 17 out of the 19 years full time with the Patriots (Brady missed the 2008 season due to a torn ACL injury). Brady now joins Bruce Arians, who was considered the guru, who helped groom Peyton Manning, while the two were together with the Indianapolis Colts. Now, its time for the GOAT to ride off into the sunset one final time.

Then, during a Hulu TV ad during Super Bowl LVI, an ad was aired during the game, where Tom Brady was promoting the new Hulu TV deal and finished the ad by saying "I'm not going anywhere".

As the off-season continued, every sports talk TV show was debating on where Tom Brady would go, or if he would resign with the New England Patriots.

Then, Tuesday morning, on Tom Brady's Instagram, he posted an image with a note talking about how much New England and the Patriots organization meant to him.

In that post, the first line of the second image reads, "my football journey will take place elsewhere."

It happened, after 20 years, Tom Brady will not be wearing Navy Blue, and Gray with the New England Patriots.

Now the question was, which team will receive Brady's services.

In mid-October, during the Pat McAfee Show, Pat McAfee said that it would make the most sense for Tom Brady to sign with the Los Angeles Chargers.

Then there were reports following the Wilder vs Fury fight, that Brady would sign with Las Vegas Raiders, then during a Syracuse basketball game, Brady, and his now-former teammate, Julian Edelman, were seen face timing Mike Vrabel, who is the coach of the Tennessee Titans.

As it drew closer to the March 18th free agency window, that the Tampa Bay Buccaneers would become the front runners for Tom Brady.

With an offensive line that was ranked 7th in the NFL by Pro-Football Focus, and a defense that, under Todd Bowles, was starting to hit its stride during the season, which will give Brady the confidence that he can bring the team with the worst winning percentage in the NFL, back to the playoffs for the first time since 2007.

What Are Brady's and Tampa's Expectations

There is no question Tom Brady is the GOAT, and his legacy will forever be linked with New England, but he can add on with Tampa Bay.

While the Arizona Cardinals added the best wide receiver in the NFL, DeAndre Hopkins, but are still a year or two before they are back.

New Orleans Saints resigned Drew Brees, for two seasons, and still have DeAndre Jordan on the defensive side of the ball, and Michael Thomas on the offensive side.

Expectations for Tampa are simple, head coach Bruce Arians said that if he can 7 games with Jameis Winston, he can win with anyone, now he has the GOAT, playing in warm Florida weather, with no state income tax. So, for Tampa, its playoffs or bust, with that offense, the greatest offense-minded coach in the game, and a defense that can do enough to not make Brady have to throw for 400+ yards a game all 16 games.

For Tom Brady, its the exact same, playoffs or bust, now Tom Brady has been cut from the umbilical cord and is on his own now, no more Bill Belichick.

While he is entering his age 43 season, there is still the drive for Brady to compete and win on a week to week basis.

With two games a season against both the Falcons and Saints, an honest expectation for the Buccaneers is 11-5 and taking the first NFC Wild Card.