The Economics Of America's Waiters And Waitresses 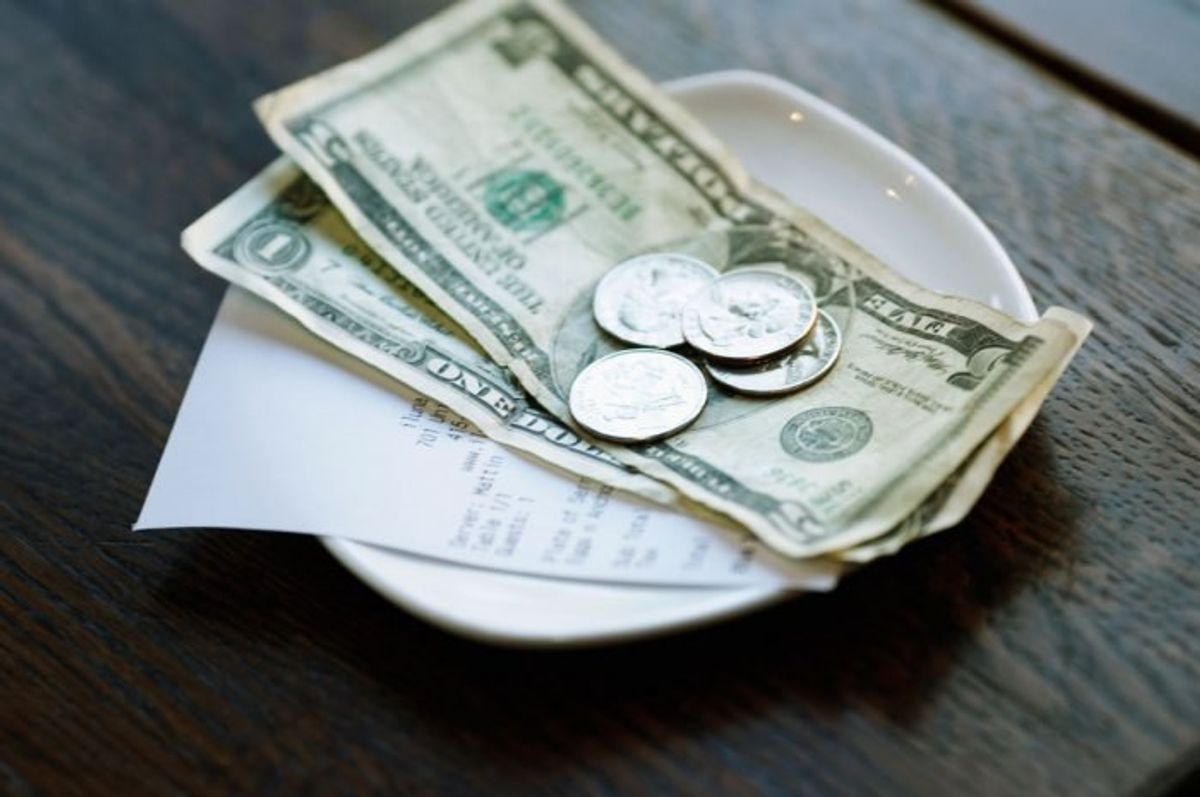 Economics is something not many people care a whole lot about. However, when you get the check back after your meal and it asks how much you're going to tip, you might ask yourself, "Why?" Why do we have to leave a couple dollars on the table when we leave restaurants? And should we?

The job of a server at Steak ’n’ Shake is far from cushy. It’s arguably the most stressful, arduous, and greasy job a teenager can have—plus you’re getting yelled at all the time. Making $12 per hour on average in tips alone was a great incentive to continue working there despite the less than desirable working conditions. Most of my former coworkers at Steak ’n’ Shake would agree that the tipping system is truly in their favor and for a long time, I agreed with them, and then I disagreed with them, and now I agree with them again.

What led me to a time of indecisiveness were the many convincing arguments I’ve heard. The most compelling argument is as follows: Tipping is arbitrary and unnecessary.

Although it seems to be a positive incentive (good work equals good money), tipping is mostly arbitrary. A study done by Michael Lynn, a Professor at Cornell University and a tipping specialist, found that tipping is at best random. People who receive extraordinary service as opposed to average service tip only 1% more. That’s far from a good enough incentive for a server to do a better job. Since the tip isn’t an actual incentive for servers to work harder, then it really is just a capricious tradition in the American culture.

You should know that I agree with this argument’s content, but I disagree with its conclusion.

If tipping is found to be statistically arbitrary, then why would it make sense to keep it? In economic terms, tipping is mutually beneficial because labor productivity is maximized, the most efficient labor is allocated to the most valuable hours of production, and nonproductive labor is eliminated.

I’ll start with maximized labor productivity. Remember when I said that I was payed $12 on average in tips? The average check for a table of 4 would be around $20. A 20% tip is customary, so that’s $4. Now, how many four-top tables do I have to take in an hour to make $12 an hour? The answer is 3. In order for me to make $12 an hour, I need to take 3 tables an hour to fulfill that. Now, there also might be times that the restaurant will be completely dead and no one will come for an hour. So now over the two hours period, I need to take 3 extra tables to make up for that. That’s 6 tables in one hour, which is a lot. What’s my incentive to take 6 tables in one hour? $12 an hour. On the other hand, if I were paid a steady wage, I would have no incentive to take extra tables—I would just get my fellow employee to take it for me. But on the tipping system, I might find that I can take even take 4 or 5 tables an hour if I work hard enough. Then, if each table I take gives me a tip, it’s easy to understand why I will try to take as many tables as I can and thus maximize productivity.

Second, labor is allocated to the most productive times. The shortest shift I would take at Steak ’n’ Shake would be something around 4pm to 8pm. I would be willing to work 4pm to 8pm because that was the dinner rush and I knew that I would make more money. If I had the choice to come into work either 2pm to 6pm or 4pm to 8pm, I would choose the latter, despite the increased stress of a busy restaurant. If I were paid a flat-rate, I would choose work from 2pm to 6pm instead because it’s less stress for the same amount of money. If the tipping system wasn’t in effect at Steak ’n’ Shake, what would end up happening is all of the more experienced servers would start trying to work at the least busy time. Since the most productive times are the busiest times, and servers want to work at the busiest time, it is safe to say that the most efficient labor is allocated to the most valuable hours of production.

Third, lazy work is not rewarded. Before each server gets to go home, he or she has to complete a set of tasks like rolling silverware, mopping, and straightening the dining room. Side-work is the worst part of working in the food industry. As a server making a tip, I want to spend more time taking tables and the least amount of time doing side-work. Side-work doesn’t get me a tip, and at the end of my shift, I just want to go home. If I were paid a wage, side-work doesn’t seem so bad because it’s less work than serving tables and I get paid the same. Instead of servers working as fast as possible to go home, managers would be begging servers to hurry up. Tipping eliminates the ability to be lazy while doing nonproductive labor like side-work.

I’ve also heard a couple other less convincing arguments like, “But it’s the businesses job to pay it’s employees, not the customers,” “Tipping is a form of bribery,” and “It’s an inconvenient moral obligation for customers to rate their server.” That’s fine, you can argue those things, but it has absolutely nothing to do with economics. Economics is “wertfrei” or value-free—which is to say that those ethical debates about how it ought to be don’t have any relevance to how efficiently an economy works. As I’ve argued, tipping is mutually beneficial because labor productivity is maximized, the most efficient labor is allocated to the most valuable hours of production, and nonproductive labor is eliminated. Don’t you want your dining experience to be efficient? I know I do.