The U.S. Is Funding A War In Yemen You Haven't Even Heard Of

The U.S. Is Funding A War In Yemen You Haven't Even Heard Of

The U.S. has been complicit in the bombing of innocent civilians in Yemen by a Saudi-led coalition 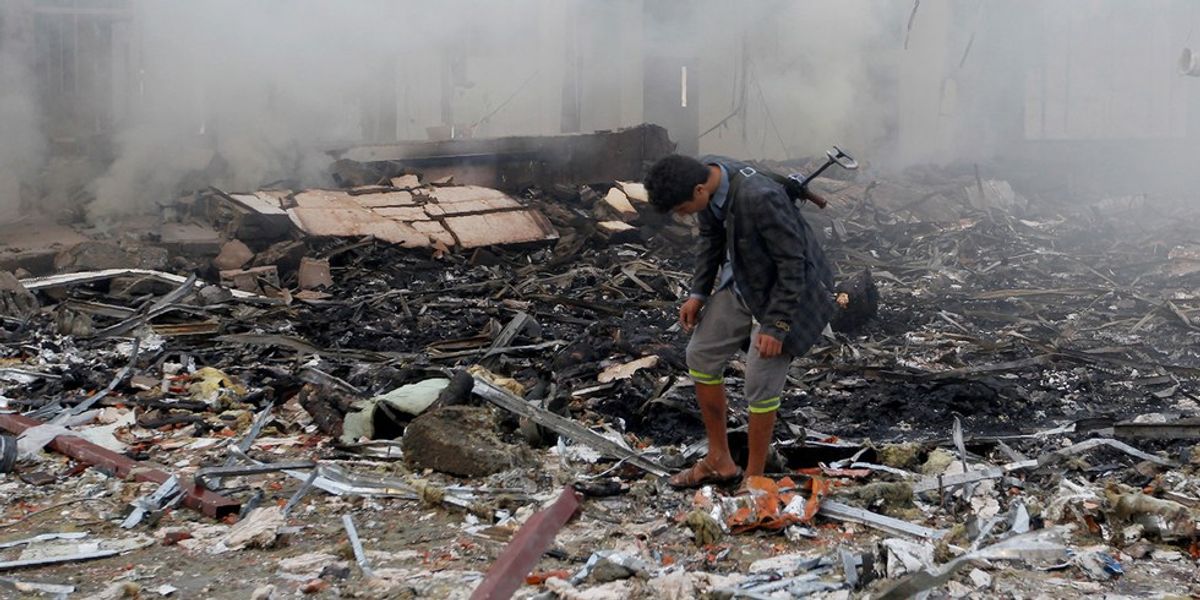 There is a war going on that you have likely never even heard of. Since March 2015 Saudi Arabia and eight other Arab nations have carried out a merciless bombing campaign against the Houthi-led rebels in the country of Yemen. The war has taken thousands of innocent lives, displaced over three million civilians, and has left over 80% of the population in grave despair and in need of humanitarian assistance.

Both the U.S. and the U.K. have supplied billions of dollars in arms to the Saudi regime, and as a result, should face harsh criticism. In 2015, the Wall Street Journal reported that the United States is also providing targeting intelligence. Meaning that with the use of unmanned surveillance drones, the U.S. has helped Saudi Arabia determine where they should carry out airstrikes. All of this, of course, begging the question, what responsibility does the U.S. have for the slaughter of innocent civilians?

On October 8 the Saudi-led coalition bombed a funeral ceremony, killing at least 140 civilians and injuring more than 600, in what was just the latest example of the heinous war crimes that have taken place on Yemeni soil.

Pictures of fragments from the devastating airstrike appear to show that the bombs were made in the U.S.

In February, Saudi Arabia’s Ambassador to Britain, Prince Mohammed bin Nawaf bin Abdulaziz, wrote a piece in the Telegraph defending the bombing campaign saying Saudi Arabia is “promoting regional stability”, and ultimately seeking a “political solution”. Which is interesting, because anyone seeking to conduct a counterinsurgency campaign must understand that a solely enemy-centric strategy of indiscriminate, and ultimately disproportionate slaughter is not a proper method of achieving your goals.

He also states that they are seeking to “defend internationally-recognized and democratically-elected president, Abd Rabbuh Mansour Hadi, from an Iran-backed Houthi rebellion,” coincidentally, he leaves out the fact that Hadi was elected in a race that went uncontested.

Now, this criticism should not be mistaken as praise or support for the Iran-backed Houthi rebels, or defending their essential coup, and siege of Sanaa back in 2014. The argument could easily be made that Saudi Arabia has every right to defend itself to prevent Iran from gaining a stronghold in the country. However, many of the attacks Saudi Arabia has carried out in the name of defending the Yemeni population, have only resulted in massive civilian casualties and utter destruction of schools, homes, hospitals, factories, and markets, as reported in the Intercept.

Since the funeral bombing, a few different things have occurred. The USS Mason, a U.S. Navy destroyer off the coast of Yemen, was fired upon. Reuters has reported that U.S. officials told them, “There were growing indications that Houthi fighters, or forces aligned with them, were responsible for Sunday's attempted strikes, in which two coastal cruise missiles designed to target ships failed to reach the destroyer.”

This prompted the U.S. to intervene with its first direct military action by firing cruise missiles at three coastal radar sites controlled by Houthi forces last Thursday. As a result, on Sunday, the U.S. and U.K. have called for an immediate ceasefire in Yemen.

While a ceasefire may actually result in some progress, Yemen has proven to be just another clandestine foreign operation that has received minimal, if any, media coverage. There are evident flaws with all of this. The complicity of the U.S., as well as the U.K., has enabled the Saudi-led coalition to decimate the country of Yemen, with little sight of a concrete political solution coming anytime soon. It’s important to also point out that foreign interventions have increased the chances of homegrown terrorism. While the U.S. may condemn the death of innocent civilians, it stands by as it occurs and fails to understand that it all but contributes to the cycle of radicalization and violence.

For a brief history of Yemen and how things have escalated, Vox ran a great piece that breaks it down.