The Falsehoods of Modern Feminism 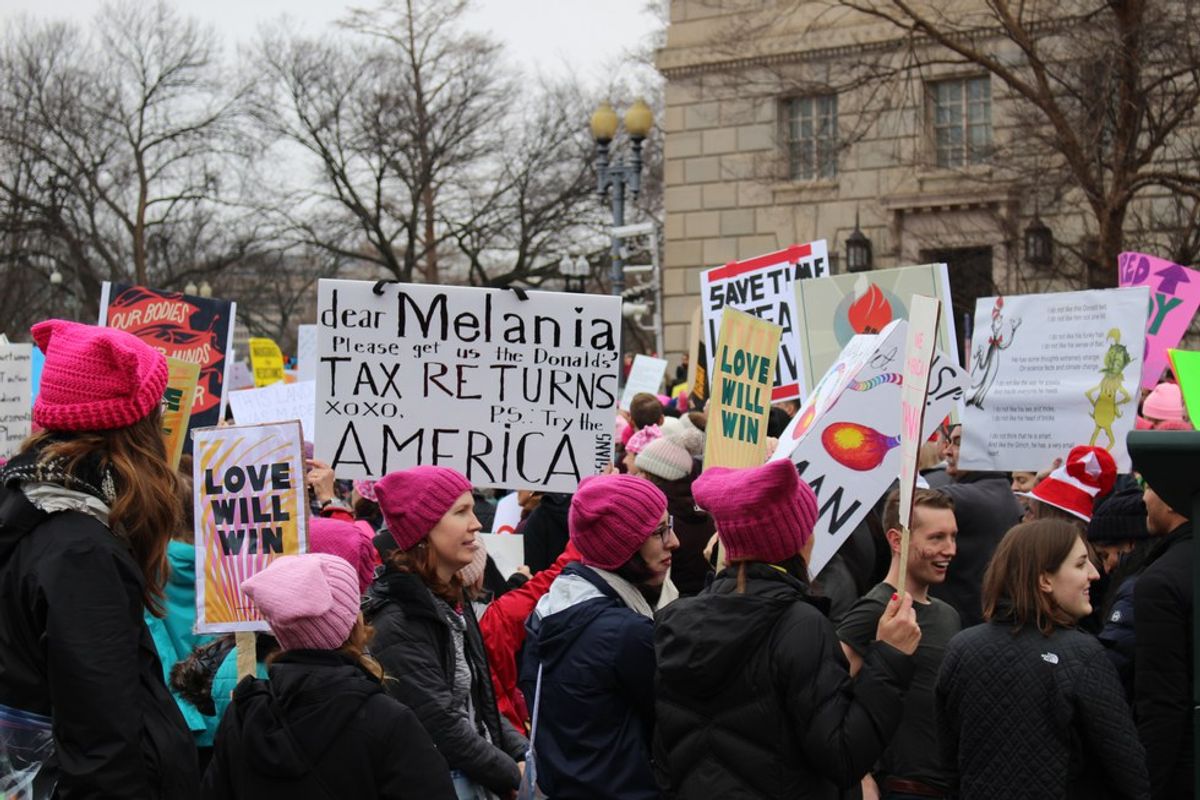 As someone who witnessed the Planned Parenthood sponsored Women's March on Washington, I saw in person the hypocrisy and divisiveness behind the 3rd wave feminist movement. Yes, I am a female; but I will never classify myself as a modern feminist. There are many falsehoods to be found in the feminist argument, here are 3 of the most prominent.

3. They promote love, but ensue hate.

What the woman is holding has "Donald Trump, what a dick" written on it. (Yes, it is what you think it is)

Feminists of the left held signs on January 21st proclaiming love and acceptance, but refuse to accept the 2016 election results. Contrary to their belief, he is legally their president. It's far too late to change this. If they wanted to see change, there's plenty of ways they could have gone about it. Volunteer on a campaign. Stay educated, and find a platform to promote your views without personal attacks. Better yet, show up and vote. Also, throwing around insults does not correlate with the promotion of diversity and acceptance. With that, if feminists think that violent personal attacks against Donald Trump will cause him to listen to them, they're fiercely mistaken. Not only does this make them look foolish, but it takes away any validity that their argument once held. The disrespect that our president is receiving is nothing to be proud of. Not that he cares, but that is beside the point. What the point is, is it is okay to disagree with the president. Actually, opinions on either side are encouraged when they are respectful. But do not make the harsh assumption that everything Trump will do is wrong or bad. It's this simple: Praise him when you believe he has done well, and respectfully criticize him when he has not.

2. They want the government's help, but only when they say so.

Many modern day feminists support legislation like Obamacare. If you've ever looked into the policies of this plan, the federal government is ultimately given power over your health and how it is maintained. It's a one-size-fits-all plan. Some feminists supported growing the size of government through the democratic presidential candidate, Bernie Sanders. Sanders wished to propose legislation for free education for all, causing a large increase in taxes and government intervention. This is where the hypocrisy comes in. These women wish for the government to intervene when it is convenient. They want the government to help them pay for things, but not protect the unborn's right to life.

1. They preach diversity, but neglect diversity of thought.

This is what I've found to be the biggest lie of the Feminist movement. Some of the highlights of the feminist argument include the advocation of LQBTQ rights, Equality of men and women, racial equality, as well as the rejection of xenophobia. Yes, these are all valid things to fight for. But if these women preach of diversity and equality, it needs to go for all sides. You cannot discount the diversity of thought. On another note, the movement that is so pro-women, refused to include pro-life women in their march. They appropriated pro-life women, assuming that because they disagree on one thing that they must disagree completely. Fun fact: You can be a feminist and be pro-life. Carly Fiorina said it best, in regards to the Pro-choice movement: "Sadly, pro-life women were not welcome at this march," she said, "Apparently they don't believe in a right to choose what she is going to believe." The belief that you must appropriate fully and completely with a party is untrue. I, along with many other conservatives, believe the idea of 'principle over party'. What this means, is that you don't have to believe everything that the political party you support says. You can be a conservative, while being pro-choice. You can be a registered democrat while disagreeing with our open immigration policies. The beauty of America's political system is diversity. Don't allow yourself to be put in a bubble of comfort and compliance.

Nicole Marie Nigro
Individual Creator
8423
c1.staticflickr.com
Where to start...... Let me start with the cliche that life throws us curveballs and what we do with it is what counts.