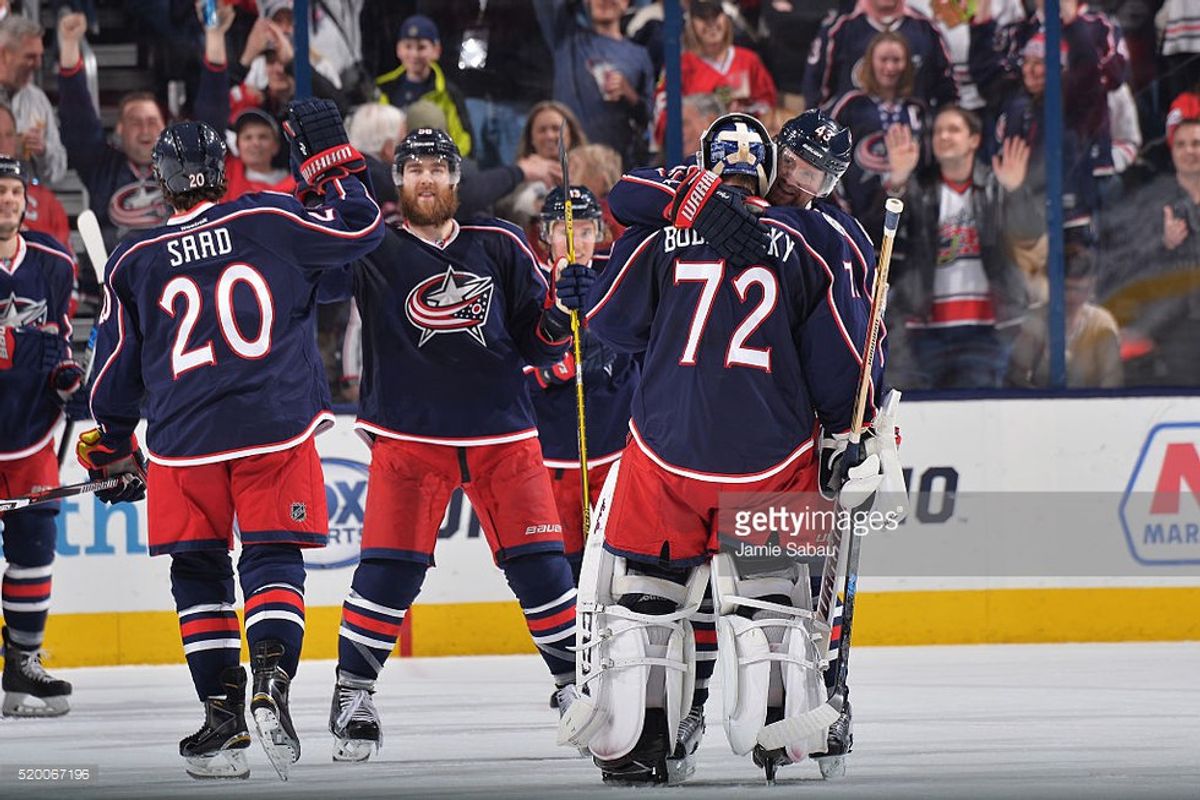 One of the view memories I have of my dad takes place at a Dayton Bombers game. Growing up in Springfield meant that Dayton was the closest we were to hockey. I remember being at the game and seeing merchandise with a weird red and blue logo. My dad said that it was for a new NHL team that was set to play in Columbus the following year and that we’d be sure to go to a game. Shortly after that he got diagnosed with cancer, and we never got to go.

That is not where the story ends though, only the beginning. The beginning of a franchise so irrelevant Barstool Sports neglected to even write about them in their preseason assessment of all teams. The Blue Jackets got skipped over because no one thinks anyone cares about them. Well I still do.

I lived and died with them pre-lockout when they were so bad we landed Rick Nash with the 1st pick in the 02 draft, and it felt like he was the only reason we watched. I got my hopes up post lockout when they acquired aging stars like Adam Foote and Sergei Fedorov to turn the team around only to continue to be dismal.

Then a miracle happened. A new GM put together a decent team with a no nonsense coach and a young goalie who together, got us, and Nash finally, to the playoffs in the spring of '09. I was elated. Finally, Columbus on the big stage. We’d be on national TV the smug Canadian commentators would have to give us attention. Unfortunately the excitement did not take hold across central Ohio like I thought it would. As the playoffs started I was listening to sports talk radio in Columbus when the topic of conversation was whether or not people would be worried that the Blue Jackets recent and surprising success would take attention away from Ohio State spring football. That, more than anything, is why deep down I really can’t stand Ohio State football. For the first time my favorite team in all of sports finally found some success it was to be overshadowing locally by a college inter squad scrimmage….Also the Jackets got swept by the dreaded Detroit Red Wings in the first round.

The team returned to mediocrity shortly after that. Even after acquiring star Jeff Carter from the Philadelphia Flyers, and he pouted about living in Columbus and even called the city boring. I have it on good authority it is not a boring city and Jeff Carter is a scum bag. The team dealt him and Rick Nash around that same season and we as a fan base got ready for yet another rebuild.

The team got younger and I got older. I moved off to college and met people that loved hockey. I excitedly joined in the conversation and got a collective blank stare when I would bring up my damn near obsession with a historically bad team. This in lies the worst part of being a Jacket fan, the cripplingly irrelevancy. When I rant about the Jackets the most I get is an eye roll from another hockey fan, a shrug of the shoulder asking me why on earth I root for them, because I love Columbus damn it, and I love hockey too, and I think my dad did as well and if watching the Jackets was something we could have done together then I’m going to keep watching them, and god willing I will have a son and I can tell him about all the awful times I had watching this team.

Until then I’ll take advantage of the affordability ($15 tickets with a student I.D.) and the proximity. The two post season wins in 2014 weren’t all that long ago, and our new coach seems to care more than any other one did. For now I’m optimistic, last season was bad but there is hope, not sure where but it’s in there somewhere, probably next to Rick Nash’s old Rocket Richard trophy, and Sergei Bobrovsky’s Vezina. Go Jackets.

Caitlin Marie Grimes
University of South Florida
11559
Beyond The States