Dear White People: Now is the time to step back and listen. 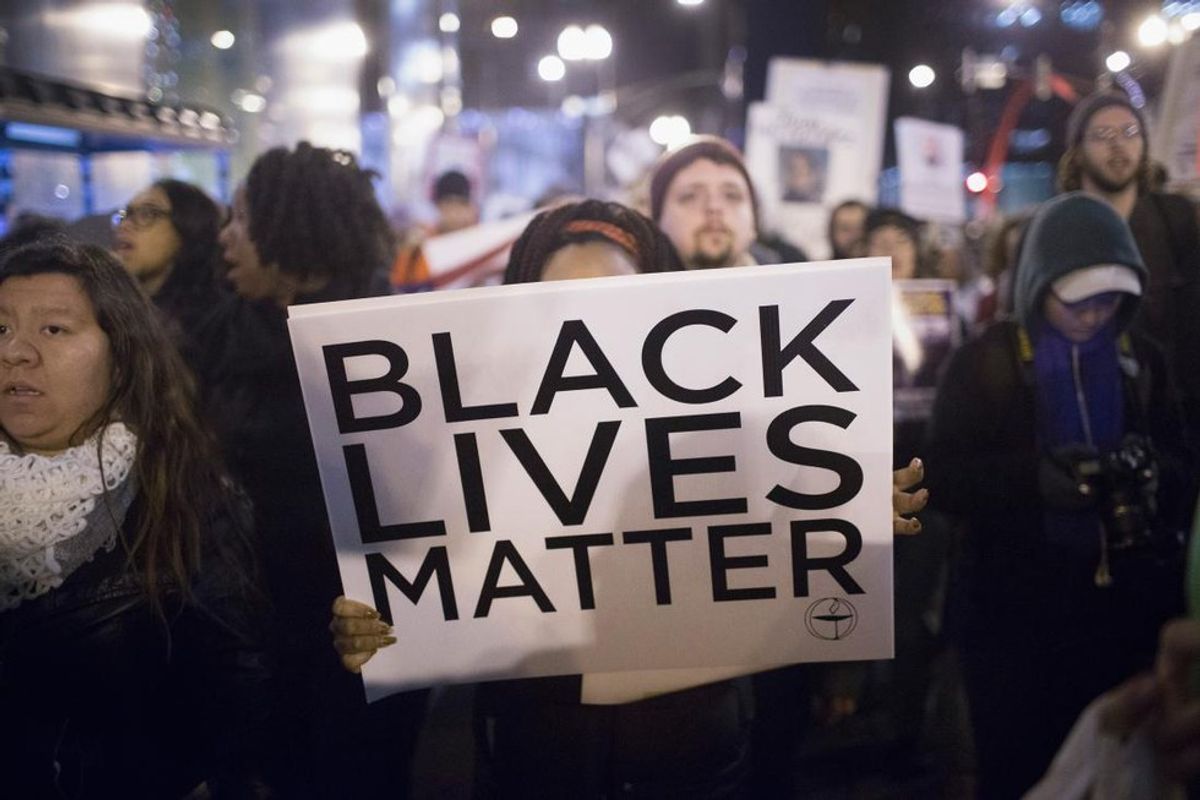 On Thursday night, a candlelight vigil was held at SUNY Purchase for members of the black community who have been affected by brutality and violence, more specifically at the hands of police. I was only there for the last five minutes or so, which I regret, but what I saw was profound; students of all colors coming together to commemorate and honor those lost to senselessness and injustice. Someone handed me a candle. and I listened as someone in the center of the group spoke of those who stayed silent, of how it was their time to speak out.

Before we blew out our candles, I was able to take a picture, which I later put on Instagram.

I thought it was a nice portrait of what solidarity on our campus looked like. How when we come together, we become strong enough to take on, or at least bring forward, the issues that will be most prevalent to us in the future. Apparently, some others didn't see it the way I did; not even a minute after I posted the picture, a man named Scott left this comment:

"Black lives matter is a complete joke to the white community. It is only making things worse for the black community. White people laugh at it."

"Nothing is going to change and the problem will only get worse. I know you know that."

"It will never work. White people do not care."

If it wasn't clear just by looking at these comments, Scott is white. His Instagram doesn't have much to offer, either; merely a lone selfie. That's not important, though. What's important are the things he said, and his complete disregard for what I was trying to tell him. So maybe if I tell you all at once, it might stick a little better.

Those of you reading who think like Scott, or maybe even if Scott himself is reading this, please pay attention.

On the official Black Lives Matter website, in a statement about the group's background, this paragraph stands out:

"Black Lives Matter is an ideological and political intervention in a world where Black lives are systematically and intentionally targeted for demise. It is an affirmation of Black folks’ contributions to this society, our humanity, and our resilience in the face of deadly oppression."

Notice how nonspecific that statement is toward any one cause of oppression. The group isn't out to vilify another group of people, its goal is to broadcast their oppression out into the world, in hopes that something will be done about it. They get into more specifics further down the page:

It has been said by leaders of the movement before that it was never just about police, and that violence on the movement's part is not acceptable. Just like every group of people, there are always those that want only to disrupt. But it is not the end goal of BLM to burn every police car and kill every cop. The movement's focus is to end black discrimination and oppression on all fronts.

Furthermore, it's not about advancing the black race further than the white race. The collective need to rid the country of supremacy is the reason that Black Lives Matter was founded in the first place. The endgame, much like the equally stigmatized feminism movement, is equality.

"#BlackLivesMatter doesn’t mean your life isn’t important–it means that Black lives, which are seen as without value within White supremacy, are important to your liberation... We’re not saying Black lives are more important than other lives, or that other lives are not criminalized and oppressed in various ways. We remain in active solidarity with all oppressed people who are fighting for their liberation and we know that our destinies are intertwined."

When people like Scott say that the movement is only hurting the black community, those people aren't really paying attention. Change is slow, but it's happening. The concept that BLM is hurting its own community by failing to address "Black-on-Black" crime is also preposterous because "Black-on-Black" crime is simply a phrase. As Michael Harriot explains, " Almost all victims of violent crime are victimized by someone they know. White people hurt White people and Black people commit crimes against Black people. Almost every study shows the biggest predictors of violence are socioeconomic status and the relative segregation of the offenders’ neighborhoods. When white men shoot up movie theaters or college campuses, it is never categorized as “White-on-white crime” even though 84% of the white victims of murder are killed by white people. Even though 53% of gang related murders are committed by whites."

As for nothing changing and white people not caring, that's wrong, too. A new survey shows that fifty-one percent of young, white Americans either strongly or somewhat support the Black Lives Matter movement. That's a ten point increase from last year, which proves that BLM has been very effective in getting their message across.

Now, if you're anything like Scott, you still may not be convinced. This is where you need to put your focus. Since you are white, you will never fully understand the necessity of this movement, since you have not been oppressed or profiled the same way black men, women and children have. I will never fully understand it, and I accept that. But I refuse to stop learning about it, and thinking of ways to better the community around me. If you truly care about black lives, you can start by reading more into the movement. Visit the BLM website, pay attention to black voices, like Shaun King, Stacey Patton, Dr. Cornel West, and Ta-Nahesi Coates, speak to black people in your own community. Reach out in any way and yearn to understand.

Read black literature. This problem goes further back than the BLM movement, further back than Dr. Martin Luther King Jr., further back than Solomon Northup. Pick up a book by Maya Angelou, Toni Morrison, James Baldwin. Coates' Between The World And Me is an incredible book, a short read, and a great start if you want to learn about our troubled history with race from the perspective of someone who's still affected by it.

Most importantly, if you decide to support and join the movement, you must remember that it isn't about you. The last two paragraphs of the BLM's mission statement are vital to remember:

"When you adopt Black Lives Matter and transform it into something else..., it’s appropriate politically to credit the lineage from which your adapted work derived. It’s important that we work together to build and acknowledge the legacy of Black contributions to the struggle for human rights. If you adapt Black Lives Matter, use the opportunity to talk about its inception and political framing. Lift up Black lives as an opportunity to connect struggles across race, class, gender, nationality, sexuality and disability.

"And, perhaps more importantly, when Black people cry out in defense of our lives, which are uniquely, systematically, and savagely targeted by the state, we are asking you, our family, to stand with us in affirming Black lives. Not just all lives. Black lives. Please do not change the conversation by talking about how your life matters, too. It does, but we need less watered down unity and a more active solidarities with us, Black people, unwaveringly, in defense of our humanity. Our collective futures depend on it.

Nothing will change if we keep telling ourselves that nothing will change. Black Lives Matter has already made so much progress in their goal to be heard. Their protests have become culturally relevant, not just in their culture, but in ours. We're seeing it more and more every day. But in order for progress to be made past that, we have to step back and actually listen to what they're saying. For people like Scott, their distaste comes from the idea that actions speak louder than words. Maybe that's the point; that since their words refuse to be heard, they must speak even louder with their actions until someone hears.

If you're white, it's not your job to judge those who have had the same privileges you enjoy purposefully denied to them. It's your job to listen to them and give them what they need. If you deny them that, then you really aren't listening.