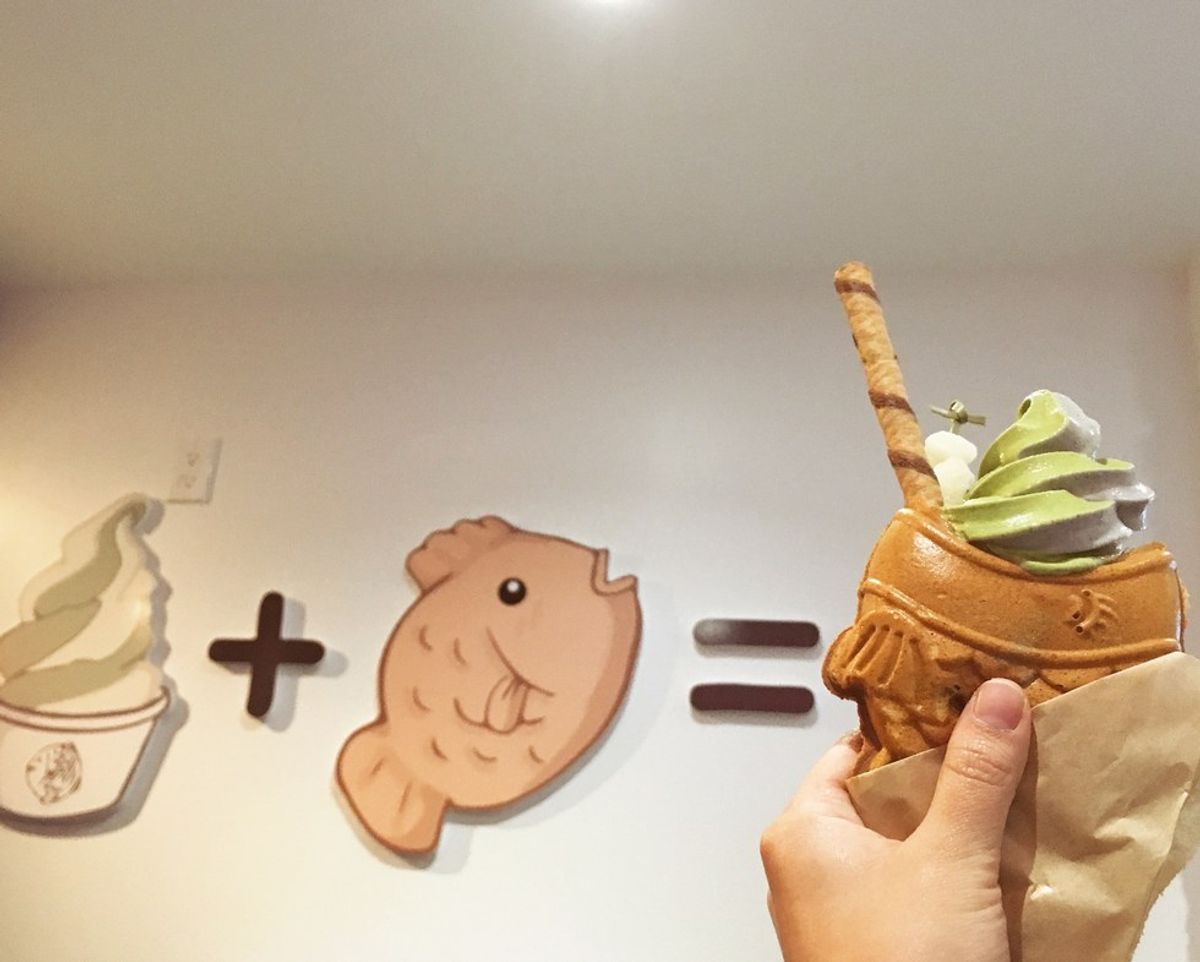 Before last Friday, I’ve never had strangers come up to me and ask, “Why? Just, why? Why??”

That’s funny because I ask myself these questions every day. But last Friday was a bit of a special occasion. I just can’t help myself when it comes to events I see on Facebook pertaining to food.

Taiyaki NYC was having a grand opening for their first Manhattan location, a compact but clean storefront on the quiet Baxter Street that stems off the busier Canal Street right around the fuzzy boundaries of Chinatown and Little Italy. I curse my bucket list for featuring “Waiting in line for a grand opening.” Because when it’s on the bucket list and I have a free Friday night, there’s no saying no! Not to mention a buy-one-get-one deal and some friends who are willing to go.

The plans were set 24 hours before the event, with unequivocal expectations that there would be a long line considering the amount of posts in the Facebook event page with, “We have to go,” “OMG @--- @--- @---.”

Regardless, there was no doubt in my mind that it wouldn’t take longer than two hours, leaving enough time in the night for us to even stop by Big Gay Ice Cream (on the ice cream bucket list) and maybe stroll along the East River Park.

At 4:15 PM on the corner of Baxter and Canal, I was greeted by a promenade of people, mostly of Southeast Asian descent, starting from the storefront at 119 Baxter, southward toward Canal, ending about a third of the way eastward from toward Mulberry—a sprightly, hungry human train that Google Maps estimates to be about 200 feet.

Not bad, right? A quick interrogation of the lucky ones at the front of the line informed us that the wait would be around two-and-a-half hours. For a grand opening, that’s a steal. And as a hostess who doesn’t sit except for twenty seconds on the toilet seat (even then, it’s squatting) maybe once per seven-hour shift, standing for a third of that time is a piece of cake.

Half an hour brought us to the corner of Canal and Baxter, about 66 feet—smiling faces, cool breezes, rush-hour traffic and excitement prevailed. Just three buildings to pass before we rewarded ourselves with freshly baked fish-detail pastries filled with custard or red bean paste, topped with swirls of creamy soft serve and a topping here or a drizzle there: A feast for the eyes as much as the mouth.

An hour later, and we’d only barely shuffled. I looked over some biochem notes to make myself feel productive.

Another hour later, and we seemed to be halfway there—although according to the first people we encountered, we should have been there by now. We became filled with resentment, until a kind Taiyaki employee handed us a sample of their chocolate soft serve in a cup for four of us to inhale.

Another hour and I couldn’t seem to hold my pee any longer. Fortunately, the “best sponge cake in town” establishment kindly allowed me to use their restroom. I purchased a couple of moist sponge cakes to hold us over for what we hoped was only half an hour more.

At this point, we’d all entered a state of delirium with the occasional bout of hanger. Regret and resentment hovered heavily above us as we each silently gazed ahead into emptiness, unaware of our physical being anymore, yet fully aware of time passing. Or just aware of how much we all wanted soup dumplings ASAP.

You can imagine the dilemma: continue waiting, not knowing how much longer it would take nor what inconveniences await or ditch the line after having invested three-and-a-half hours already, with nothing to take away from that time as a reward.

Careful (and multiple) considerations kept us on the line.

When we were ten feet away from the door, two girls in front of us suddenly left, after having spent four hours with us on line. At that point, I couldn’t understand giving up.

It was only another half-hour until we stepped through the store doors, another twenty minutes to order, and finally, some ten minutes to actually receive our trophies.

No lie, I felt a bit zombie-ish as I double-fish-ted our treats, but more than that, I felt accomplished. A two-and-a-half estimated wait time at the beginning of the evening turned into just about four hours and fifty-five minutes, and we persisted like the idiotic champions we are. Although I can’t say that my “Straight Outta Japan” taiyaki is how I imagine five hours to taste like, I also can’t say it was a waste of five hours. But maybe I just won’t admit it to myself.

No—the end rewards were substantial enough to offset any negativity about the wait: one item off my bucket list, one place off my ice cream bucket list, a few minutes of studying biochem, a peek into the crazy things we humans will do, cheap soup dumplings to celebrate, an accidental run-in with Little Italy’s San Gennaro Feast, some quality time love-hating friends, and of course, a better understanding of the virtue of patience.

Sometimes things are unnecessarily long—Mark Twain’s paragraphs, War & War’s sentences, the time it takes to boil water, the delay on the express train, certain Odyssey articles, the wait for dry fish pastries filled sparingly with grocery-store ingredients, this litany and the one above…but if you wade through, you may reap some unexpected benefits. Some are tangible, but some are only borne out of experience.

And some, like a recent edit to include a grand opening wait on my bucket list, are conjured post-experience for mitigation.