Stop Pretending Any Of This Is About Heritage.
Odyssey

Stop Pretending Any Of This Is About Heritage.

I don't know how to explain White Lives Do Not Fucking Matter. 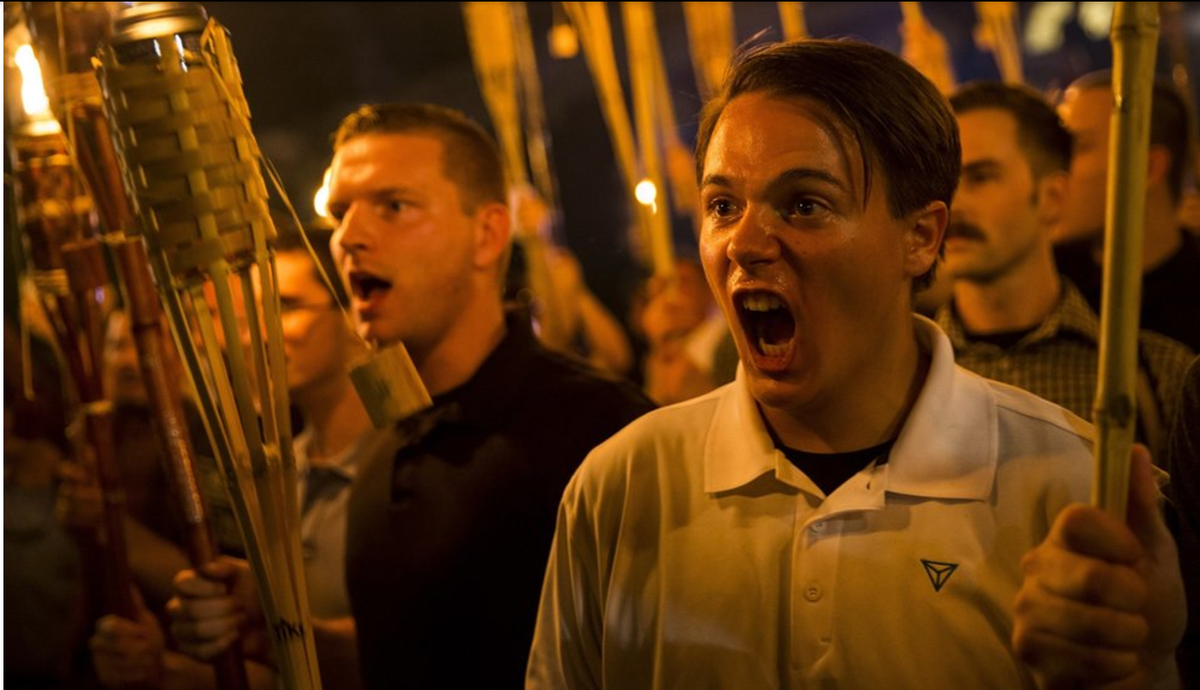 When people talk about terrorism, their immediate thoughts usually go to 9/11. Amajority of Americans fail to think about the men who shot up Aurora and the elementary school in Connecticut. Even major news outlets call them "troubled individuals" rather than terrorists.

On August 11, 2017 a group of white supremacists, alt-righters, and neo-nazis gathered at the University of Virginia to protest the removal of a confederate statue. The hordes of mainly white men gathered with their tiki torches and chanted "White Lives Matter", "blood and soil", and "one people, one nation, end immigration". They gathered around the statue of Confederate General Robert E. Lee from Charlottesville and marched to the statue of Thomas Jefferson on campus. Many were clothed in swastikas and witnesses compared them to the Klu Klux Klan members. The white supremacists were met by a group of protesters, and while the meeting was contentious, there lacked violence. The Friday night protest was only a precursor to what started early in the morning on August 12.

This should have been enough to shake Americans. These men who talked about how "the heat here is nothing compared to the ovens." But that didn't seem to be enough for the police department to shut the event planned for the next day down. The arguments circling were that they are allowed free speech, like every other American.

But what about hate speech? The same night the mayor of Charlottesville, Mike Signer, made a public statement about the demonstration: "Everyone has a right under the first amendment to express their opinion peaceably, so here's mine: not only as the Mayor of Charlottesville, but as a UVA [University of Virginia] faculty member and alumnus, I am beyond disgusted by the unsanctioned and despicable display of visual intimidation on a college campus." They bulldozed past freedom of speech and directly into hate speech when they decided to chant "White lives matter."

That should have been the end, but the sun rose over The University of Virginia the next day and a "Unite the Right" movement gathered. From there the group of Neo-Nazis and white supremacists were gathered by Alt-Right leader Richard Spencer and former KKK member Davd Duke. They cited their involvement as ways to "fulfill promises to Donald Trump"

The swastika clad supremacists took to the main street of Charlottesville, where several businesses were closed for the day in protest against the white supremacy and one church had to be filed out the back door in order to avoid bodily harm. Many of the white supremacists sported shirts with the confederate flag, Adolf Hitler quotes, and other racial slurs. Along with it were flags for the Neo-Nazi party and the Alt-Right. Perhaps the most alarming though were the many motorcycle helmets being worn by the protesters, who claimed the movement was an "incredible moment for white people who've had it up to here and aren't going to take it anymore".

The signs were all there that these people came in without any intention of a peaceful demonstration. Fully clad in protective gear and carrying mace with them, the Alt-Righter's may've claimed to be protesting for their "heritage", but they were prepared for a fight against those who disagreed with their agenda.

Blood began to boil with the arrival of protesters of the protest. Anti-racism and the leftist group Antifa showed up to remind the Alt-Right that Charlottesville has no space for white supremacy. The country recorded 86% of it's voters went with Clinton over Trump in November. As soon as Antifa became involved the disagreements skyrocketed to violence. People were battling in the streets while the police, in full swat gear, failed to pull them apart. Brutal videos of confederate flag clad protesters and black masked anti-protesters surfaced and played on every news station across the country. Finally the stakes were up when a Dodge Charger bulldozed through the crowd of anti-racist protesters and wound up killing one and injuring 19 others. The driver was taken into custody and was found to be one of the white supremacists. His name is James Alex Fields, Jr. 20, of Maumee, Ohio and he is now facing murder charges.

That was when the police truly responded.

Charlottesvile PD began to spray protesters on both sides down with pepper spray and dropped a smoke bomb to try to clear the crowd. The question remained as to why they avoided the escalating tensions for so long. The photos that began surfacing had people on both sides covered in blood, cuts, and some receiving medical attention on the streets. The assumption is that the police department was too far out of their league for the amount of people who showed up. The state of Virginia called for a state of emergency. The ENTIRE STATE.

Following the brutality, President Trump took to a live video cast about the events in Virginia, only to address the fact that "we ALL must be united & condemn all that hate stands for." But what actually occurred is that he avoided the fact that is was all the doing of White Supremacists. He never once acknowledged that Neo-Nazis were the ones responsible, and you bet your sweet ass that this president has failed to use the word terrorism for the atrocities that occurred today against humanity. Trump dodged questions reporters continued to scream at him as he left the press room, and the governor of Virginia had to speak up that white supremacists are not welcome in the state. Most of Trump's peers took to twitter to speak out against the fact that he failed to condemn White Supremacy, including Chris Christie and Marco Rubio.

Almost every major news network agreed that the days events were that of terrorism.

But where do we go? The dust has settled. For now. We live in 2017, why are we rolling backwards? The president got a parade from the fucking KKK when he won the election, his most trusted adviser ran "the home for the alt-right", and he's pretending the care about the violence he in sighted. These people may have already held hatred in their hearts, they may have felt that as a Caucasian they are "superior", but the issue is deeply rooted in the government's role of providing a platform. What was once considered a terrifying minority is growing in power. Last year it was Mexicans, last week it was Russians, yesterday it was North Koreans, and today it was the black community and Jews.

Where does it end?

But white supremacy is not about politics, it never was. Donald Trump may not be marching with them, but he gave them the space to grow and the platform to create the damage. Keep screaming and shouting that "White Lives Matter", it will not change the fact that this is a terrorist organization.

The Alt-Right was started by a man who saw power in fucking World of Warcraft players. The Klu Klux Klan is actively trying to bring back lynchings. And Neo-Nazi's want to bring back the ovens utilized in Nazi Germany.