SJSU squirrels are rather helpful 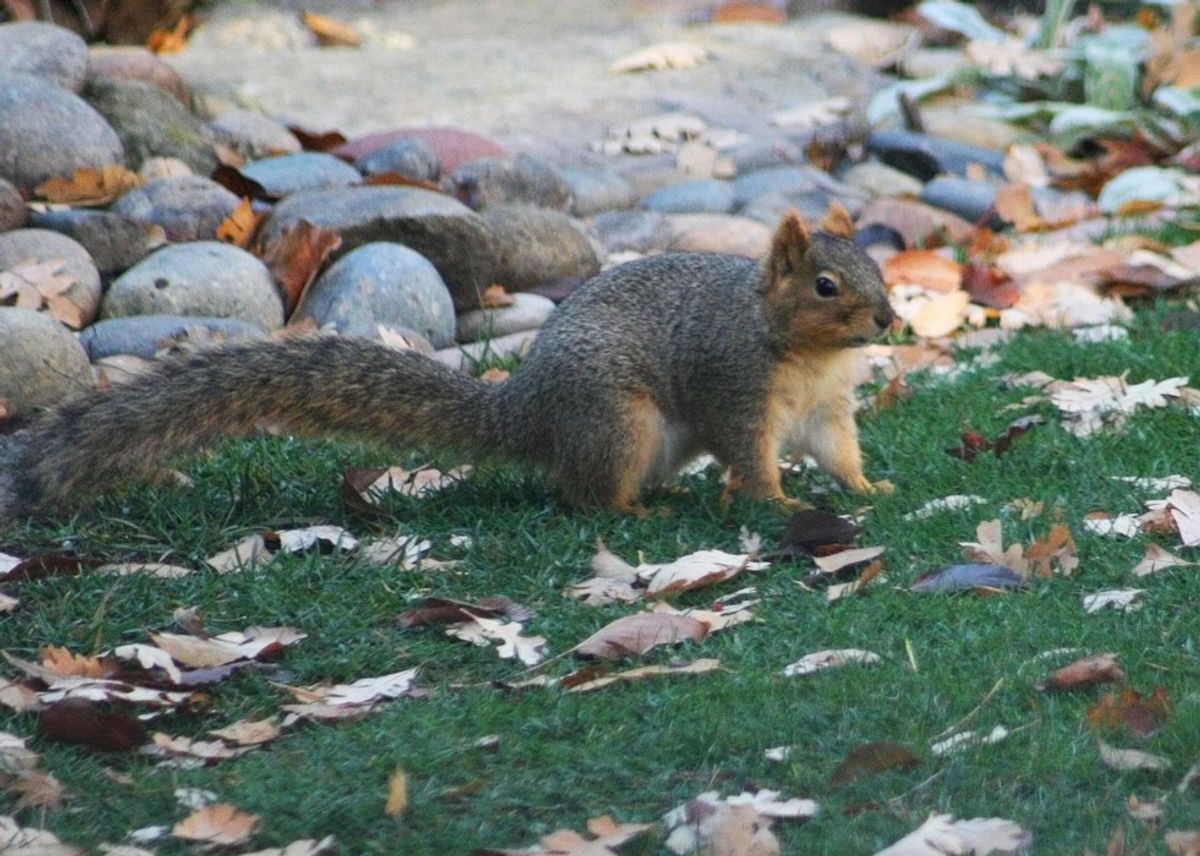 Finals are coming up. Dead week is just around the corner. I have a paper, an essay, a report and a group presentation to complete on top of studying for my exams. I used to think that my cousins who went to college before me were exaggerating when they said that college was stressful. Now, I realize that their exaggeration was merely an understatement. With the pressure to raise my GPA and my unfinished assignments threatening to drop them, I knew I needed some way of destressing. Luckily, since my first day at SJSU, there's been someone, or should I say something, that has been making my time in college less stressful.

Squirrels are rather interesting creatures that lived on SJSU even before it was founded. Now accustomed to the urban life, it's quite common to see a few of them run around or dig for delicious meals. Sometimes they curiously watch the people pass or beg for food.

Articles have been written about these squirrels, especially those that talk about concerns about their population.One article by the Spartan Daily talked about what the squirrels are and the concerns of having them on campus. The fact that many of the squirrels are not native to California holds a concern about any possible threat to native species. So far, there haven't been any major problems.

Since I always arrive onto campus at around 8 a.m., I would see several of them climbing up and down trees and digging for any food in the grass. Sometimes I find them in some of my classes. At one of my lectures at the Morris Dailey Auditorium, a squirrel accidentally came in and stayed the whole time.

Even though they can be seen throughout the whole day on campus, the majority of squirrels always disappear from sight at around 10 a.m. and return at 5 p.m. Maybe it's because most people are walking around campus during those times. Anything big can be seen as scary to many squirrels after all.

I have to admit, I have a soft spot for small furry animals. Squirrels are no exception. It's often an enjoyable experience to see their fluffy little tails flicker and their glossy black eyes staring at you. Their fat little bodies seems to accentuate their cuteness even further. Their physique compared to wild squirrels can come from the plentiful supply of food accidentally dropped by people or fed by them. There aren't any predators on campus that keep them on their toes constantly, so they don't need to run that often. These adorable squirrels seem to run on the campus trees and fields of grass when they have the chance.

I'm not the only one who appreciates the squirrels. I found a Facebook page dedicated to taking photos of squirrels on campus. Many students enjoy taking photos and even recording videos about squirrels. While some students prefer to watch them from afar, others try to have a closer interaction with them. Of course, that raises concerns for population control and health hazards as well. Still, it seems that squirrels are already used to the unusual attention.

But why is it that whenever I watch or even get rather close to these squirrels I feel a wave of calmness? Studies have shown that interaction with animals is therapeutic, and being with them can ease stress. Many of these studies are based on interactions between a human and pets. Could it be that the same results can happen with squirrels?

Then again, as I watched the squirrels and let them climb all over me, I started to think about how lucky these squirrels are. They don't have to worry about finals or the fact that their project was going down the drain. They seem to be happy with how life is while many of us wish that our lives were different. It's odd that I'm starting to feel jealous of these little creatures. In a way, the squirrels remind of that old saying from "The Lion King," "Hakuna Matata." I was worrying too much about my stress that I wasn't really living much. I should be excited for the holidays instead of gloomy for something that might not really matter in the end. Not only have the squirrels calmed me down during the day, they also reminded me of the joy of simple living.

Everyone needs a squirrel in their lives to reassure them that life should be lived simply and the worst will pass. For someone who just started a new chapter in their lives, I find this reassurance quite helpful. Sure the list of things I need to complete is overwhelming, but I now know that it's just a little part in my life. I should live like squirrels do -- think rather simply about the problems in my life. I have a new motivation to live and see life in a new way. Squirrels are pretty good at helping me deal with stress and troubles.

Now I just wish they can help me with calculus.