Go read "xxxHOLiC". You're in for a haunting, delightful treat. 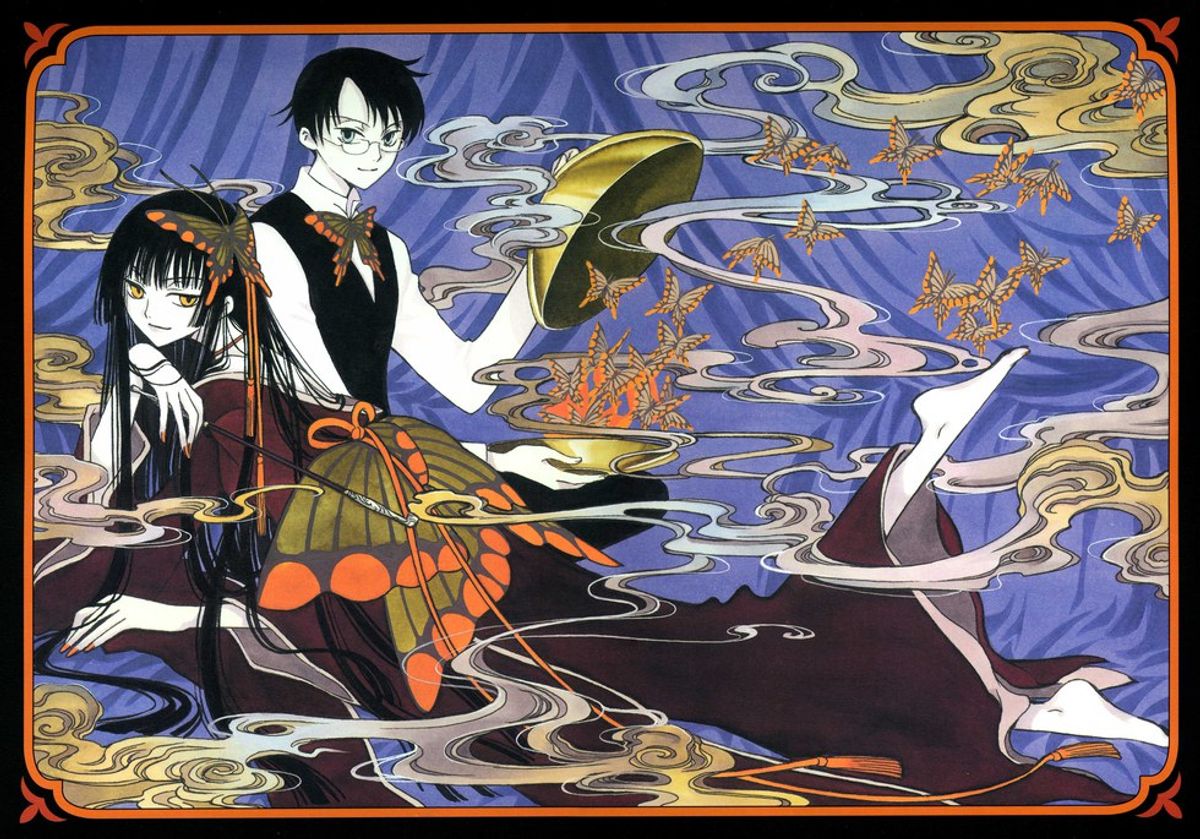 The art for the first volume of "xxxHOLiC". (Art credit: CLAMP) (Source: Pinterest)

Hello, everyone! It's me, back again with another spooky spotlight to get into the Halloween spirit. This week's rec isn't strictly Halloween-y, but has a kind of subtle spookiness and haunting quality that works well year-'round, too. Last week, I highlighted AHS: Hotel. This week, I'm gonna highlight my favorite comic of all time: xxxHOLiC. It's written and drawn by an all-female group named CLAMP, who are my favorite manga artists ever. So, let's delve into this supernatural horror-mystery comic!

Kimihiro Watanuki is your normal, average high-schooler. Well... Besides the fact that he can see spirits, and these spirits are attracted to his blood. One day, after being tackled and dragged by a mob of spirits, he decides that enough is enough and goes into a mysterious building that he was literally pulled into against his will by some force he can't explain. There, he finds the mysterious (and booze-loving) witch Yuuko Ichihara, who waxes poetic about how she was fated to meet him, and also offers him a chance to get rid of his spirit problem.

Watanuki (left) and Yuuko (right) meeting for the first time in chapter 1. (Source: MangaPanda & Google Images, Cropped by me)

The thing is, for every wish granted, something of equal value must be given as payment. As Watanuki learns, these wishes have steep costs. And, what about his wish? Will he ever be able to pay it off? As both the reader and Watanuki find out, fate is a powerful thing, and there's far more than meets the eye to this mysterious shop--and to Yuuko herself.

This series has a lot of connections with Japanese mythology, horror-based or otherwise. Still, you don't have to be an expert on these things to understand the plot. There are some genuinely frightening moments and stories, such as one with a woman who can't move her pinky finger and is covered with a dark cloud whenever she speaks. (Pictured below.) Or, a woman who runs into a monkey's paw that she begins to use. Whether it's Watanuki and his rival Doumeki, forced to work together, saving kids playing a Ouja-like game, or vengeful spirits attacking, there's something spooky for everyone!

Still, even with the focus on the supernatural, there is a human element to it all--the shop's customers, Watanuki, who goes from "selfish jerk" to "good noodle", and Yuuko, who acts as Watanuki's mentor and eventually as a familiar figure. A wonderful example of this is in a chapter involving hydrangeas, which still has stuck with me to this day, and in a chapter near the end of the series involving a shamisen (the instrument in Kubo and the Two Strings) that won't play.

The ties between xxxHOLiC and CLAMP's other works run deep. Deep enough that I'd also highly recommend reading or watching this series' sister series, Tsubasa: Reservoir Chronicle, when you get farther and farther into it. There are also references to Cardcaptor Sakura and Drug&Drop, which provide a bit of context later on, and add an extra layer of fun. You don't have to read those to fully enjoy xxxHOLiC, but they enhance the experience.

The writing is top-notch. CLAMP does a great job in creating believable characters, and Watanuki especially has so much character development. He is one of my favorite protagonists ever because of his growth. Same goes for Doumeki and Himawari (Watanuki's crush). Meanwhile, some other characters introduced later on--Kohane, for example--also deserve a shoutout for being fleshed-out phenomenally.

The art is to die for. Evoking both Western comics and ukiyo-e prints, CLAMP's art style is sleek, uses negative space wonderfully, and oh my goodness, it's so beautiful. This manga is gorgeous, which is the main other reason I'm recommending it for the spooky spotlight. I mean, look at this! It's so pretty!!!

Yuuko (above) and Watanuki (below) featured in some artwork for the series. (Source.)

The one thing I'll note is that the character designs, for aesthetic reasons, are a bit... noodle-y from time to time. While this works fine in the manga (and adds a characteristic style to it), when animated, it...

...It doesn't work. So, I'd recommend reading xxxHOLiC rather than watching it. The anime doesn't even come near doing the manga justice, save for in the voice performances in the Japanese and English versions, which are phenomenally done. But besides that--the show isn't even worth your time. Read the comic.

Still, my gushing aside, really, it's a phenomenal manga that only gets better as you go on. It contains so much character growth, a good scare from time to time, great writing, and all in all, it's an utter joy to read. It's a series I hold close to my heart, and as you read it, you'll easily see why.

I could write about how Watanuki's character arc is so unbelievably well-done, or how the series subtly examines and deconstructs the ideas of the male gaze and of gender roles as the series goes on, or examine the plot in the context of Japanese horror as a genre and Japanese mythology, but I'll spare you my ramblings. Still, for you completionists out there, it's already finished, and the sequel (xxxHOLiC: Rei) finished recently too! (Which I've gotta read ASAP.) So, no need to worry about a lack of material or closure.

Anyway, my rambling aside: Go read xxxHOLiC. You're in for a haunting, delightful treat.

You can find xxxHOLiC in your local library, or on Amazon.