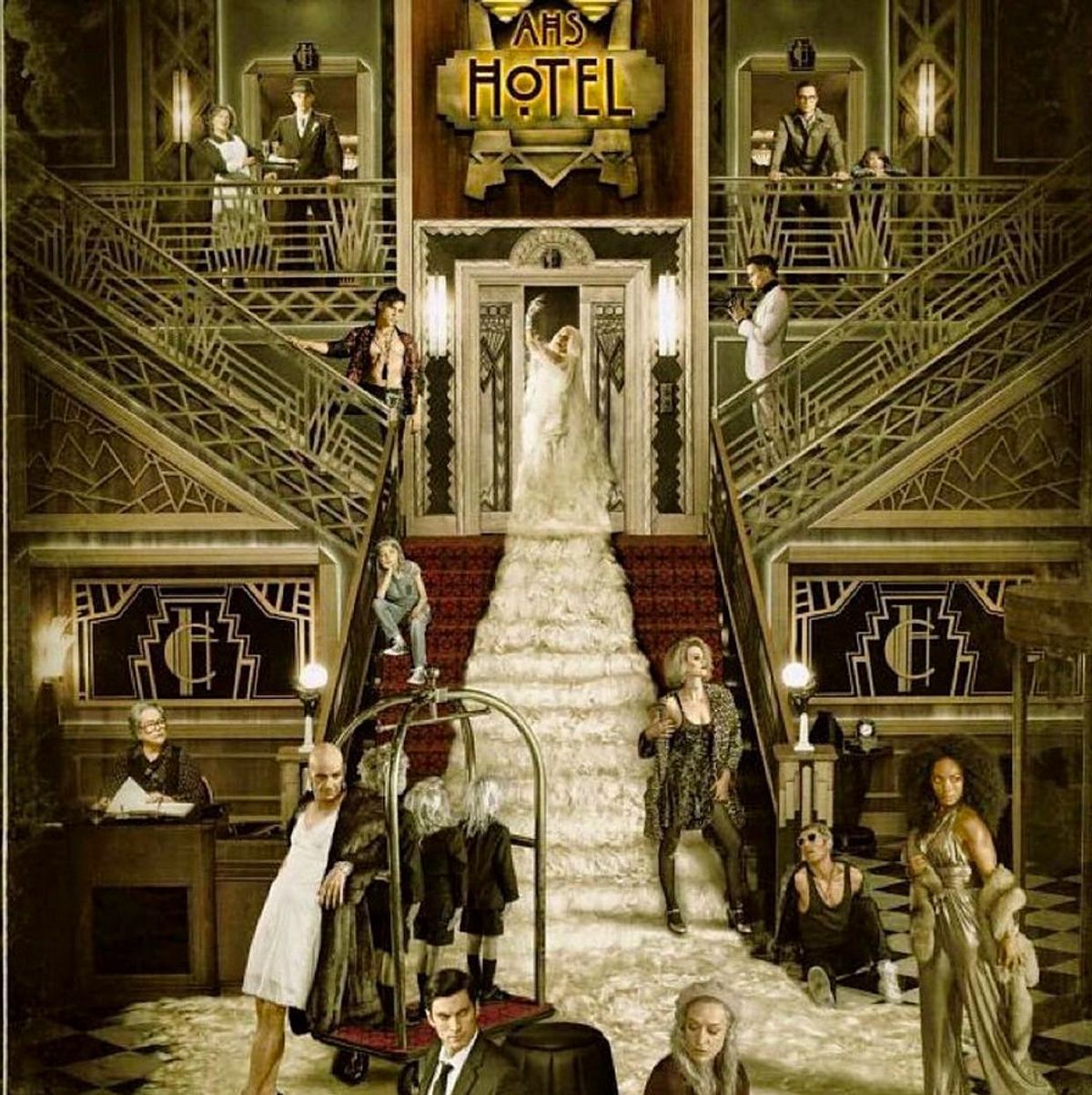 Well, everyone, it's October, and we all know what that means--

Time to get spooky.

I adore Halloween, and with every Halloween comes a good ol'-fashioned scare-fest. So, I've decided to do a series of articles about spooky, Halloween-y, or even ghostly works of fiction for the month--the Spooky Spotlight! Even if I, personally, am a huge wimp. My bro Jack, who writes awesome articles, got me into American Horror Story, and I think it's only appropriate to start off the spook-fest with a series that stole my heart with its second-latest installment, Hotel.

Now, for reference, and also as a disclaimer: I'm still getting through the series as a whole. I've seen all of Murder House (season 1), and a solid most of Hotel. Roanoke Nightmare, the current season, is on hold for me, and I know for a fact that I couldn't get through Asylum. I'll get back to you all about Creep Show and Coven. (I may appreciate this series, but Asylum goes a bit too far with graphic everything for my personal tastes. So a summary sufficed for me.)

That aside, I wasn't a big fan of Murder House, even if I enjoyed the well-written story and phenomenal acting. It's a great show, but jeez. Trigger/content warnings are definitely necessary with this franchise, and that season happens to have a ton of those.

Hotel, thankfully, wasn't nearly as bad in terms of graphic material. Is there violence? Yes. Is there murder? Of course. There's an entire episode about serial killers. (More on that in a moment!) But there was far less shock factor, in my opinion, and the story really took center stage. (Except for the drill. You all know what I'm talking about. We're not even gonna touch that here.)

That aside, this season, which focuses on a spooky hotel which may or may not be haunted (spoiler alert: It definitely is) and a homicide detective who is investigating Ten-Commandment-based murders checks in there. But, as we all soon find out, there's far more than meets the eye. And what's up with the owner? There's something off about everyone...

Like the other seasons, this one is a loving homage to horror, and while it's dark as all get out, this darkness is infused with fun, phenomenal acting, and a surprising commentary on anti-vaxxer ideology. (The violence is shocking, but let's say it gets the point across in a darkly humorous manner.) Plus, this season has some good stuff going for it:

- Creative twists and clever writing. Granted, every series in this anthology has this, but for me, the writing really struck a chord with me. Still, a large twist later on in the season didn't feel contrived. So, kudos, writers. You did good.

- Lady Gaga. She gets her own bullet point. Not only can she sing, but she is a phenomenal actress. She makes the season for me, to be honest, and was the highlight of every episode. Plus, that fashion? It's to die for. (Both figuratively and literally.)

- It's fun. Whether it's a fight scene set to "Hotline Bling" or a romantically spurned vampire vendetta with style, or heck, even a surprisingly haunting episode about real life serial killers having a banquet, it's a wild, fun ride that is worth the trip.

All in all: Go watch AHS, and even if you don't watch Murder House or the other series, watch Hotel too. It's a devlishly good time.

Glorie Martinez
4933
Why I Write On Odyssey