Review - "Kubo And The Two Strings"

Kubo is a stunning, wonderfully fun stop-motion masterpiece that will fold your heart like origami. 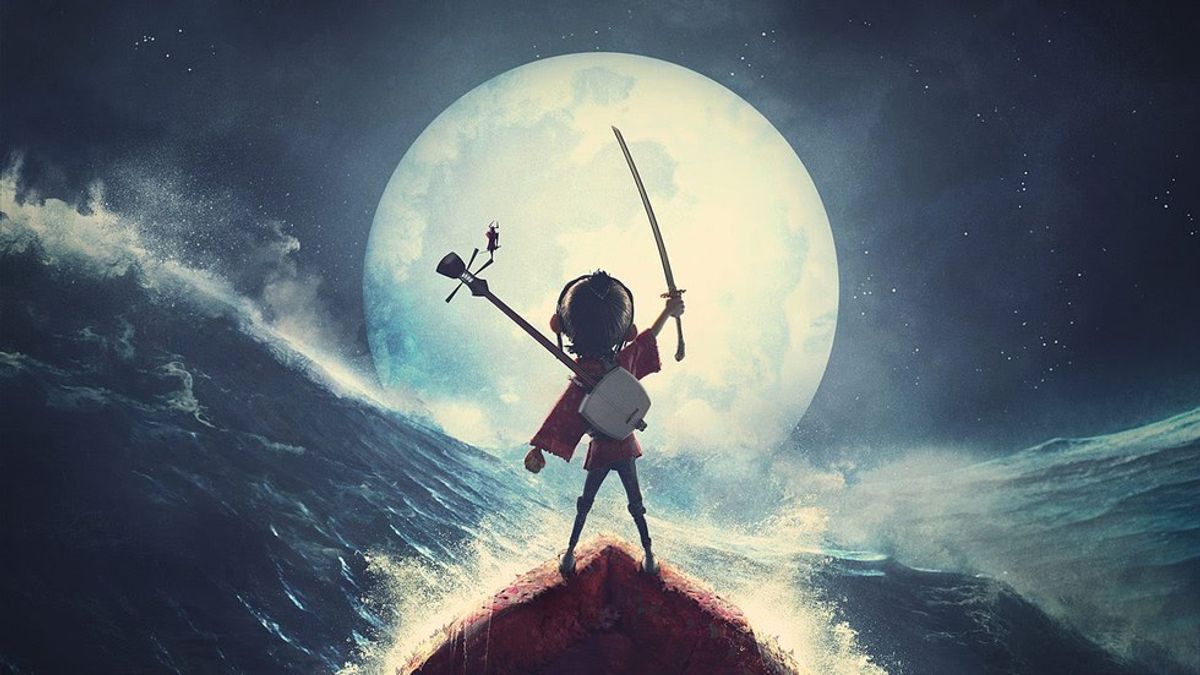 Sometimes, a film comes along that takes you completely by surprise.

For me in high school, that film was Laika's stop-motion masterpiece Paranorman, which quickly became one of my favorite animated films of all time. Laika is a studio with a soft spot in my heart; they do stop-motion, and they do it well. I thought Box Trolls was cute and all, but I thought, "there's no current film of theirs that can hold a candle to Paranorman!" (I'll confess, I haven't seen Coraline yet, so I may rescind that statement in time.)

That is, until I saw their new film, Kubo and the Two Strings.

This movie is the story of a young man, the titular Kubo, living in ancient Japan with his mother, who sacrificed everything in order to save her son from her wicked family, who took away his eye. His father, Hanzo, was a brave samurai, but sacrificed himself to save them. Meanwhile, Kubo and his mother have the power to manipulate paper into fantastical origami shapes which come to life--Kubo, specifically, channeling his magic through a shamisen (three-stringed Japanese instrument played with a large pick called a bachi) and its music. (If you want an example of shamisen tunes, here's a wonderful one!)

He and his mother live a lonely life on a deserted cliffside cave, but the two of them are happy, even if his mother isn't exactly "there" emotionally or mentally. Still, he finds joy in telling stories to the townspeople of his nearby village, using his shamisen to bring all of it to life. Still, his mother warns that he shouldn't be out alone at night--otherwise, his evil aunts and grandfather, celestial beings, will try and rob him of his one remaining eye.

Of course, Kubo, taking part in traditional Japanese summer festival celebrations, does just that, leading both he and the viewer on a quest to find magical armor with the help of a talking monkey (named "Monkey") and a beetle (named--you guessed it, "Beetle") who had once been a samurai who'd trained under his father. Can they find the magical armor, or will his evil aunts and grandfather find him first? Watch and find out!

If there's one strength about this film, among many, it's the attention to detail. I've been studying Japanese language and culture for 8 years now, and while I'm no expert on said language and culture, I do know enough to see that Laika did a ton of research. Traditional Japanese culture is portrayed in a respectful manner without stereotyping, that is also accessible to Western audiences. Whether it was the dancing and taiko drums during the festival, or the releasing of lanterns down the river, I was pleasantly surprised at how accurate it all was. (Considering it's a fantasy adventure stop-motion film, of course.) Especially the shamisen music. I love me some good shamisen tunes. On that note, the soundtrack is sublime, carrying on the action when it must and the peace when it needs to relax. Also, the shamisen cover of "While My Guitar Gently Weeps" by Regina Spektor that plays during the credits deserves a mention for being awesome. Just saying.

That detail also translates into the visuals. This film is gorgeous. Combining CGI and stop-motion seamlessly, the worldbuilding just from the visuals is worth a mention, transporting me into the film's atmosphere with ease. It is reminicsent of ukiyo-e woodblock printing. Seriously, I hope this film at least gets nominated for an Oscar for how beautiful it is.

Kubo and his mother, sharing a moment together. (Source: Geeks Of Doom)

Meanwhile, the story, while being relatively straightforward, as it is a "kid's film", is still poignant enough for me, as an adult, to get emotional while watching it. I found it surprisingly bold, that the first 10 or so minutes of the film are incredibly melancholy, featuring Kubo trying to take care of his mother, who is unresponsive a large section of the time. While kids can watch this film, there is a meditative quality to it akin to the best of Studio Ghibli's films, which mature viewers can appreciate.

The thing I found intriguing about the film is that the dialog alternates between very modern (most of Beetle's quips come across this way, as he's the comic relief of the trio), story-telling like (which makes sense, given the narrative's focus on storytelling) and very anime-esque. And, that is not a bad thing! It's an interesting combination of styles, and as a fan of both Western and Eastern animation, I appreciated it.

Kubo using his shamisen to make his origami move during one of his storytelling sessions. (Source: Cinemum)

The voice acting deserves a mention. Charlize Theron nails it as Monkey, and Kubo's actor, Art Parkinson, is phenomenal. Rooney Mara and Ralph Fiennes, as the evil relatives, do a wonderful job of getting under the viewer's skin due to their creepiness. And, of course, I couldn't neglect to mention George Takei's cameos and Matthew McConaughey's performance as Beetle, which brought the movie some much-needed lightness.

The one thing I will note is that most of the cast is Caucasian, which contrasts the... Well, very not-Caucasian story and Asian representation the viewers see on-screen. That isn't to say that this makes the movie bad or anything--I loved it!--but like many, I've been frustrated recently at the lack of diversity in film, especially in regards to whitewashing Asian characters. (Cough, cough, LOOKING AT YOU, "GHOST IN THE SHELL" FILM AND THAT ONE MATT DAMON MOVIE. Cough, cough.) So, that's just something to keep in mind as you watch this film. It doesn't detract from the film at all, but considering #OscarsSoWhite and other instances of whitewashing, it ought to be mentioned.

My musings aside, if you have the time, go check out Kubo. It's definitely a very different film than Laika's other work, but that's not a bad thing; that's one of its strengths. Fans of Paranorman won't be disappointed. It's a wonderful little gem of a film, and you won't regret it.

Kubo and the Two Strings is rated PG.

You can see "Kubo" in theatres. Get tickets for your location here, at Fandango. Or, y'know, Google works too. Whichever floats your boat.

Nicole Marie Nigro
Individual Creator
8777
c1.staticflickr.com
Where to start...... Let me start with the cliche that life throws us curveballs and what we do with it is what counts.