Now that I've got your attention... 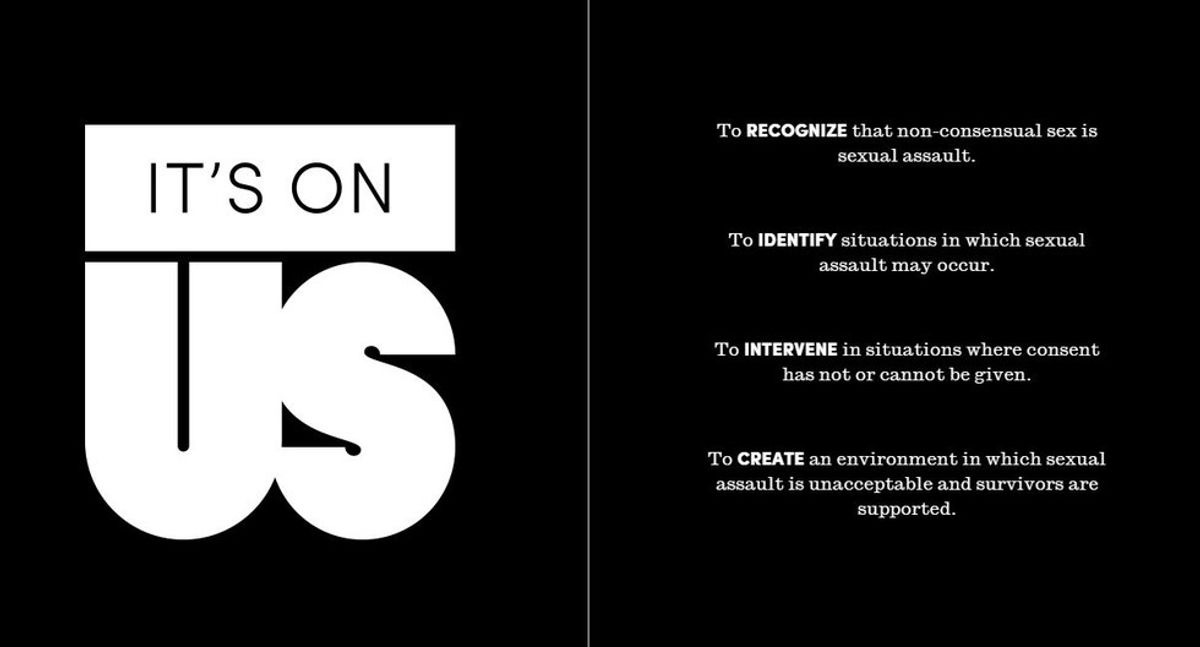 Last week, the nation took part in "It's On Us National Week of Action," a White House-led campaign. It's On Us, launched in September and aims to inform the public, especially men, about the real facts of sexual violence in college and all the ways we can help prevent it. The idea is that the more people are informed, the more "it's on us," to prevent a potentially sexually violent situation from occurring.


To help kick start the week and Vice President Joe Biden's national tour of colleges centered around this topic, the campaign, teamed with College Humor, released a brand new PSA. It uses bear attacks to put into perspective the scary statistic that one in five female students will experience a sexual assault by graduation. Actors Jake Johnson, Rob Riggle, David Walton, Lamorne Morris, and Steve Berg all star in this short clip, giving the PSA some star power.

Jake Johnson's character is unfazed as Rob Riggle's character notices that there is a bear in Johnson's apartment while they are all casually drinking and hanging out. Johnson reassures his friends to just ignore it and the problem will go away, even though the bear is very real and very dangerous. He tells them not to worry, because you know, it only eats one in five people. Chaotic behaviors quickly ensue as Johnson tries to point out that only one person will be eaten, statistically. His friends rightly argue with him saying that his argument of being able to do nothing about the situation is ridiculous.

The PSA certainly gets its point across when at the end, the action is abruptly interrupted, and the real statistic about college women is flashed across the screen. It's funny and thought-provoking, and certainly gets people talking.

At first, I thought it was a great way to get the message out and do it in a funny matter that college students will actually pay attention to. I still do, however, after scrolling through my Facebook feed, I saw that not all of my cyber friends agreed.

A major opposition to this PSA was comparing bears to sexual perpetrators, noting that putting wild bear attacks on the same level as sexually violent acts took away the responsibility of those committing the crimes.

I had never thought of it that way for many reasons, but the main one was because of this: I have never been a victim of this crime, so when I saw this video, I thought, finally, an appropriate and funny way to respond to such a horrific act. I didn't think twice about those who have actually been victims, and how they might not think this is so funny. I didn't think about the survivors, though I unfortunately know too many.

That got me thinking that though this may be a success in some capacity and failure in others, that's OK. Let's keep the conversation going. Let's make more PSAs that victims can see on TV or in a magazine that gives them the strength to tell their story or cope however they may need, as long as it's not hurting themselves. Let's make more PSAs involving Hollywood's brightest, because who doesn't love Jake Johnson?

The White House creating a campaign about sexual violence across college campuses gives me hope. This isn't a topic that should be discussed in dark corners or hushed conversations, but rather a very loud and proactive one that everyone should be involved in, and with the help of the White House, we can achieve that.

We may hear these talks a lot on campuses, but don't sigh and tune out. Listen. They have these seminars so we're better protected and better prepared to help everyone around us. They wouldn't be the fun and safe colleges we love if they weren't taking these actions.

Take the pledge to stop something when you see it, read about what you can do to help, be supportive of those willing to share their stories and don't roll your eyes if you have to listen to one more talk. That one more talk can be the difference, and hopefully one day the reason that the one in five statistic is drastically lowered, and eventually nonexistent.