A Recap Of The 2016 Cheerleading Worlds
Odyssey

A Recap Of The 2016 Cheerleading Worlds

Every cheerleader's dream was to compete last weekend. 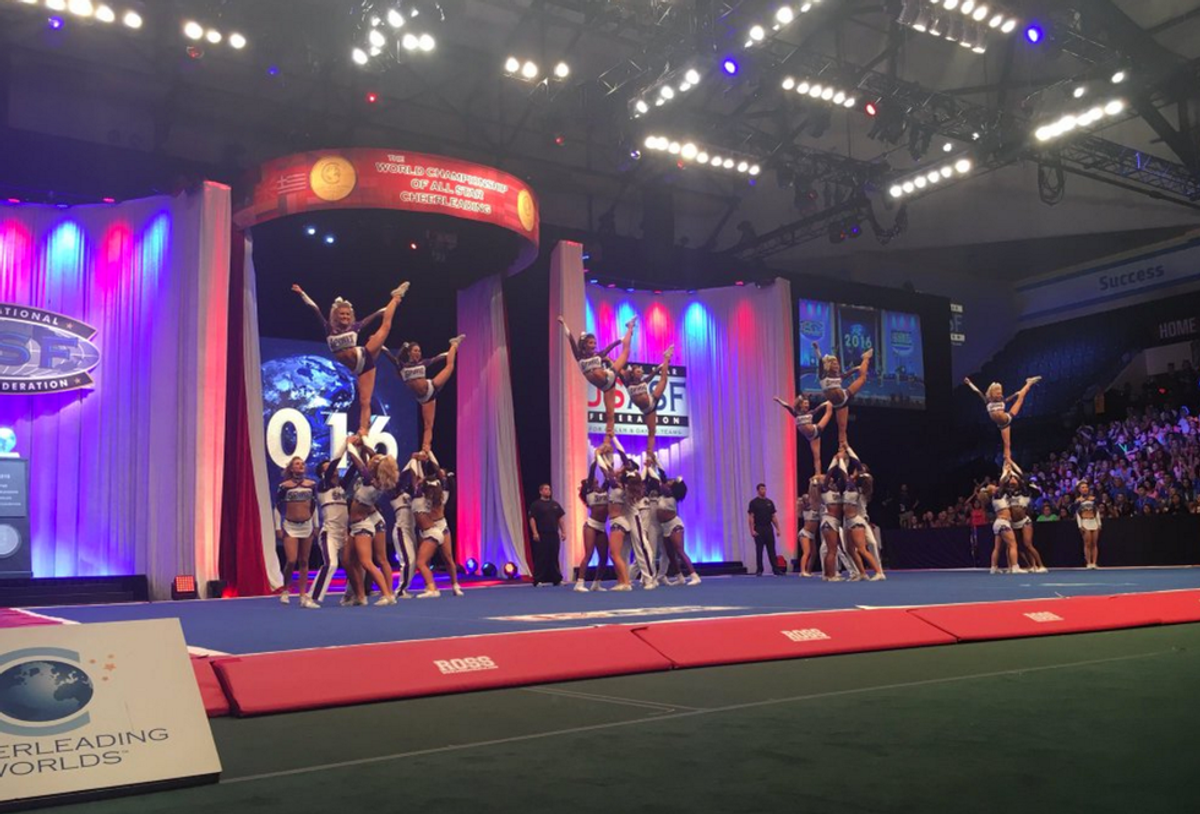 Disney World is, as we all know, "Where Dreams Come True." This statement is especially true for cheerleaders. Every April, thousands of cheerleaders and fans flock to the Orlando, Florida theme park for the Cheerleading Worlds. This past weekend, two cheerleading world championship competitions happened, ICU Worlds and USASF Worlds.

ICU, short for International Cheer Union, is a competition where each team represents their country. There are two levels, Elite and Premier, with different regulations as to what is allowed. Each country qualifies for and competes on one of the levels, and can have up to two teams: a coed team and an all-girl team. This year, Team USA won both All-Girl and Coed Premier, and Mexico claimed the title in both Elite divisions.

Although ICU is in your typical world-championship format, competing by countries, this isn't even the main event. Immediately following ICU worlds are USASF Worlds, the competition every cheerleader dreams of winning. USASF Worlds are hosted by the USASF/IASF, the All-Star Federation, and are "The World Championships of All-Star Cheerleading." Simply cheering at Worlds is a dream for many, let alone medaling or winning it.

This competition is open only to top level Senior and Open teams. The Senior 5 level is open to ages 12-18, and split into six divisions: Large Coed, Large Senior (or "All-Girl"), Medium Coed, Medium Senior, Small Coed (aka "Smoed"), and Small Senior. There are also Open teams, which don't have a maximum age cap, and are at level 5 and 6. Each level has an All-Girl division, a Smoed division, and a Large Coed division. The many divisions make it possible for many teams to compete. Instead of being broken up by country, each gym or program can try to qualify their eligible teams. This makes the dream of competing at Worlds more realistic for many cheerleaders, actually making it something they can work to make become a reality instead of just a distant ideal. This is because they don't have to be the absolute best in their country to make it on a team, and can also practice at a gym near their home. That said, it also makes USASF Worlds more US-centric, dominated by American teams in all the senior division, even though teams from all countries are allowed.

USASF worlds this year was an amazing competition. So many teams performed so well. Cheer Athletics took the most gold medals, winning the IO Smoed 5, IOC5, IOC6, and Large Coed titles. Overall, the 2016 Cheerleading Worlds were a success and a great weekend. For many athletes, this wrapped up their season on a positive notes. But this isn't the end of the 2016 cheerleading season, with lower level, junior, and youth teams competing next weekend at The Summit, hosted by Varsity. Look out for more competitive cheer next weekend, once again at Walt Disney World, where more dreams will be coming true.

Caitlin Marie Grimes
University of South Florida
10143
Beyond The States