Purdue Football: The Emotional Roller Coaster of Mediocrity
Odyssey
CurrentlySwoonLifestyleHealth & WellnessStudent LifeContent InspirationEntertainmentPolitics and ActivismSportsAdulting
About usAdvertiseTermsPrivacyDMCAContact us
® 2023 ODYSSEY
Welcome back
Sign in to comment to your favorite stories, participate in your community and interact with your friends
or
LOG IN WITH FACEBOOK
No account? Create one
Start writing a post
Sports

Purdue football can't decide whether to be average or just awful. 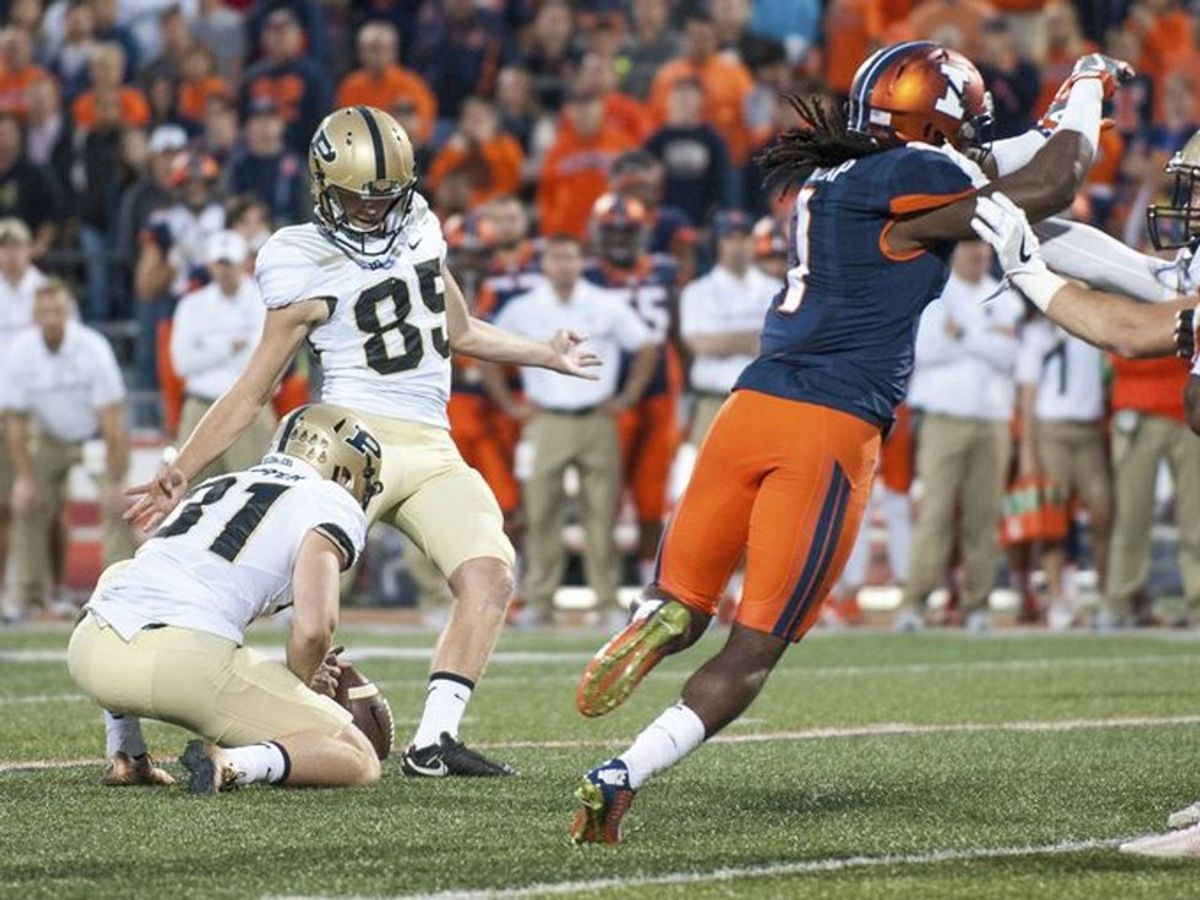 Man, what a win by Purdue over Illinois this past weekend. College football overtime is always so exciting. Almost exciting enough to make us forget that this was essentially a game between the two worst teams in the Big Ten and that Purdue nearly gave away the game with a poorly timed interception late in regulation. In fact, Purdue managed to make it into overtime due to one of the most ridiculous circumstances, in which coach Hazell used all three timeouts to ice a kicker who, before the kick, hadn't missed all year, and had knocked down a 47-yarder earlier in the game. In a case of extreme irony, the field goal attempt hit the upright, and the game was ultimately one by Purdue's own kicker, who had only made half of his attempts when he slotted in the game-winning 28-yarder.

This win places Purdue at 3-2, which is basically means for celebration. With seven games left to go, one win is all that is needed to post Hazell's winningest season. That's right everyone; four wins will be the most we've had in four seasons. To add to the disbelief, Notre Dame and Michigan State, two rivals of the Boilermakers and more successful football teams in the past few years, have fewer wins than Purdue. Of course, it's early in the season, and the Spartans and the Irish should improve as it goes on. The question is, will Purdue? Are we in for four wins, or do I even dare say, a .500 record?! Or are we in for more of the same disappointment, like when we find out that Purdue isn't going to offer any financial support, again?

Honestly, I have no idea. But what I do know, is that we're in for an emotional ride to our quest for middling mediocrity. Let's just take a look at what's happened this year so far. After a solid win over Eastern Kentucky in week one, quarterback David Blough threw five interceptions in a sloppy loss to Cincinnati. Instead of interceptions, Purdue fumbled three times, but decided they were going to win anyways, posting over 400 yards of total offense in a comeback win over Nevada.

But don't worry; Purdue brought us back to earth with a disaster of a game in their first conference game against Maryland. Purdue was ran all over, and failed to produce in any of their chances as they were trampled 50-7 by the Terrapins. By the time Purdue was ready to face Illinois, a team that deflated last year's homecoming with a 30-plus point blowout, many of us had reached the usual state of cynicism and laughable disappointment that accompanies the recent Purdue football seasons. But the emotional roller coaster wasn't over yet.

Purdue's number one running back, Markell Jones, didn't travel to Champaign, but the slack was picked up with strong showings from Brian Lankford-Johnson and Richie Worship. Coupled with the "you can't make this stuff up" special teams implosion at the end of regulation, Purdue played well to snag the victory in overtime.

Reading through this, you'd expect Purdue to have already played most of their season and were scrapping around to put up a pretty good record. In reality, it's been five games, and our wins have been against low-quality teams. But somehow, Purdue football is keeping us the edge of our seats and simultaneously groaning at our farcical play. That is the life of Purdue football these days; we haven't seen anything good in years, so wins make us feel euphoric highs. Then we experience embarrassing losses, and we sigh and look towards a more optimistic basketball season. In the end, we're bound to feel more ups and downs (more downs I'm sure) and we'll eventually find ourselves too bad to reach a bowl game, but too good to fire Hazell. Next year, we'll ride again, and again, and again. Not even Drew Brees could get us out of this emotional roller coaster of mediocrity.