Who are we? Why are we proud? 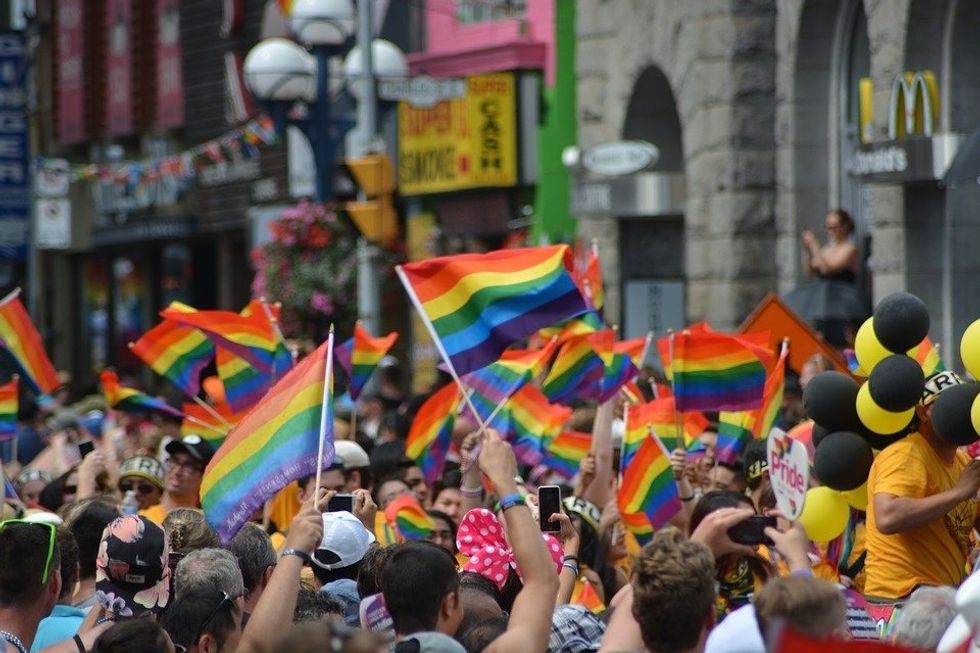 This past week, I was called a faggot by someone close to me and by note, of all ways. The shock rolled through my body like thunder across barren plains and I was stuck paralyzed in place, frozen, unlike the melting ice caps. My chest suddenly felt tight, my hearing became dim, and my mind went blank except for one all-encompassing and constant word. Finally, after having thawed, my rage bubbled forward like divine retribution and I stood poised and ready to curse the name of the offending person. My tongue lashed the air into a frenzy, and I was angry until I let myself break and weep twice. Later, I began to question not sexualities or words used to express (or disparage) them, but my own embodiment of them.

For members of the queer community, there are several unspoken and vital rules that come into play in many situations, mainly for you to not be assaulted or worse (and it's all too often worse). Make sure your movements are measured and fit within the realm of possible heterosexuality. Keep your music low and let no one hear who you listen to. Avoid every shred of anything stereotypically gay or feminine like the plague. Tell the truth without details when you can and tell half-truths with real details if you must. And above all, learn how to clear your search history. At twenty, I remember my days of teaching my puberty-stricken body the lessons I thought no one else was learning. Over time I learned the more subtle and more important lessons of what exactly gay culture is. Now a man with a head and social media accounts full of gay indicators, I find myself wondering both what it all means and more importantly, does it even matter?

To the question of whether it matters, the answer is naturally yes and no (and no, that's not my answer because I'm a Gemini). The month of June has the pleasure of being the time of year when the LGBT+ community embraces the hateful rhetoric and indulges in one of the deadly sins. Pride. Marsha P. Johnson and Sylvia Rivera, the figures at the head of the gay liberation movement, fought for something larger than themselves and as with the rest of the LGBT+ community, Pride is more than a parade of muscular white men dancing in their underwear. It's a time of reflection, of mourning, of celebration, of course, and most importantly, of hope. Pride is a time to look back at how far we've come and realize that there is still a far way to go.

This year marks fifty years since the Stonewall Riots and the gay liberation movement launched onto the world stage, thus making the learning and embracing of gay culture that much more important. The waves of queer people that come after the AIDS crisis has been given the task of rebuilding and redefining. The AIDS crisis was more than just that. It was Death itself stalking through the community with the help of Regan doing nothing. It was going out with friends and your circle shrinking faster than you can try or even care to replenish. Where do you go after the apocalypse? The LGBT+ community was a world shut off from access by a touch of death and now on the other side, we must weave in as much life as we can.

But we can't freeze and dwell of this forever. It matters because that's where we came from, but it doesn't matter because that's not where we are anymore. We're in a time of rebirth and spring. The LGBT+ community can forge a new identity where the AIDS crisis is not the defining feature, rather a defining feature to be immortalized, mourned, and moved on from.

And to the question of what does it all mean? Well, it means that I'm gay and that I've learned the central lesson that all queer people should learn in middle school. It's called Pride for a reason. We have to shoulder the weight of it all and still hold our head high and we should. Pride is the LGBT+ community turning lemons into lemon squares and limoncello. The lemon squares are funeral cakes meant to mourn and be a familiar reminder of what passed, but the limoncello is the extravagant and intoxicating celebration of what is to come. This year I choose to combine the two and get drunk off funeral cakes. Something tells me that those who came before would've wanted me to celebrate.
From Your Site Articles
Related Articles Around the Web
Report this Content
This article has not been reviewed by Odyssey HQ and solely reflects the ideas and opinions of the creator.