9 Queer Pride Flags That You Probably Didn't Know About
Odyssey

9 Queer Pride Flags That You Probably Didn't Know About

The rainbow flag is certainly the most recognizable, but it isn't the only Pride Flag there is. 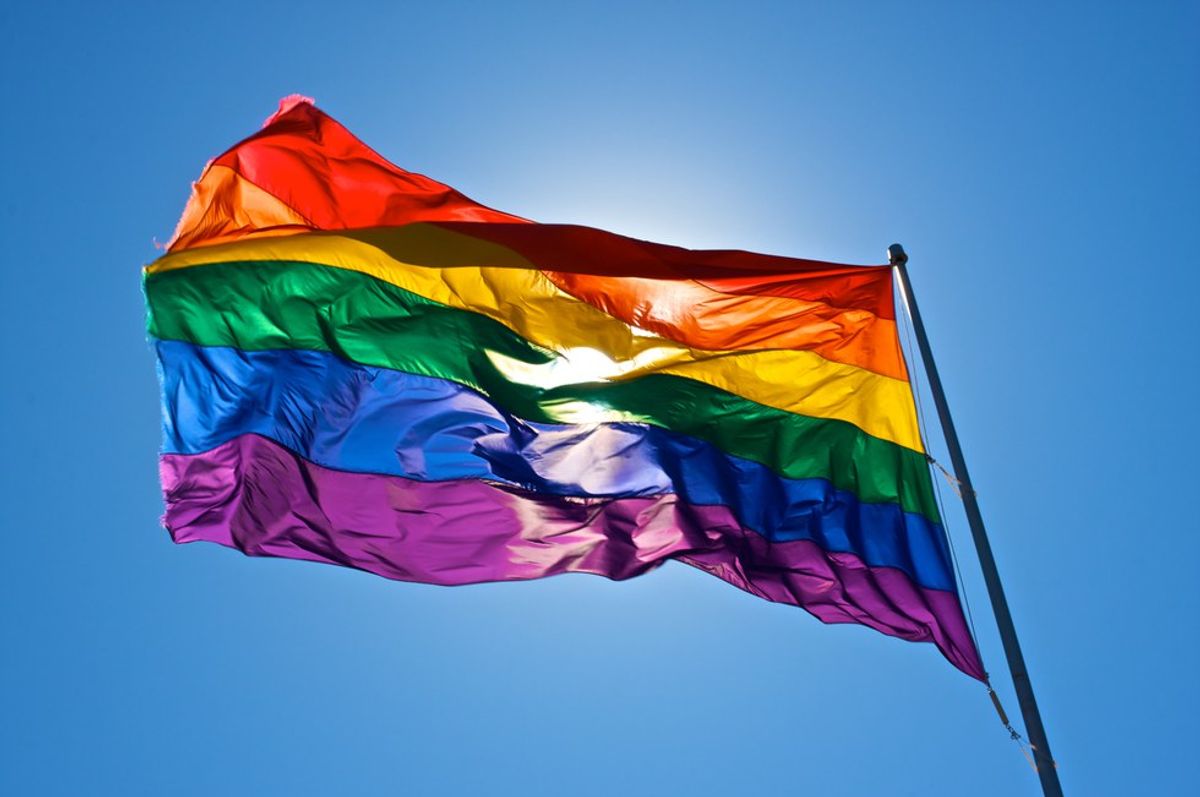 It's Pride Month yet again and fellow members of the LGBTQ+ community and their allies are celebrating. Normally around this time of year, we expect to see that all-too-familiar rainbow colored flag waving through the air, hanging from windows and sported on clothing of all types. Even when not strictly a flag, the colors of the rainbow are often displayed when showing support of the larger queer community. But what many people do not realize is that there are many, many pride flags for orientations of all kinds, so Natasha and I (Alana Stern) have created this handy guide to some others that you may not yet be familiar with:

The most recognizable letters of the entire acronym, L (Lesbian) and G (Gay), represent the homosexual people of the LGBTQ+ community. Homosexuality is defined as being exclusively sexually attracted to members of the same sex. Again, although the rainbow Pride flag is easily the most iconic and recognizable, there is a Lesbian Pride Flag as well. Specifically for "Lipstick Lesbians," this flag was made to represent homosexual women who have a more feminine gender expression. Here are the Lesbian Pride Flag (left) and Gay Pride Flag with the meaning of each stripe (right).

2. B is for Bisexual

Bisexuality is defined as the romantic and/or sexual attraction towards both males and females. They often go unacknowledged by people who believe that they cannot possibly feel an attraction for both sexes and have been called greedy or shamed in many ways for being who they are, but not this month. This month we recognize everyone and their right to love. Here is the flag and symbol that represents the big B!

3. T is for Transgender (Umbrella)

Gender identities are just as diverse as sexual orientations. Transgender people are people whose gender does not necessarily fall in line with their biological sex. That is to say, someone who is born male may not feel that calling oneself a man is the best way to describe who they are as a person; the same can go for someone who is born female or intersex (we'll get to that in a bit). Someone born female may feel that they prefer to be referred to as a man. Someone born male may feel that they don't mind being referred to as either a man or a woman. And someone may feel that neither term really fits. Identities can range from having no gender, to multiple genders, to having a gender that falls outside of the typical gender binary of man/woman, to anything in between. The colors of the flag are blue (the traditional color for boys), pink (the traditional color for girls) and white (to represent those who are intersex, transitioning, or have a gender that is undefined).

Okay! Here's where we get into the lesser-known letters of the acronym. You may have heard of some of these before but didn't quite know what they meant or how they fit into the larger queer community, or you may not have heard of them at all. Either way, we'll do our best to explain them!

4. I is for Intersex

Intersex people are people who are have a mix of characteristics (whether sexual, physical, strictly genetic or some combination thereof) that would classify them as both a male and a female. This can include but is not limited to having both XX and XY chromosomes, having neither, being born with genitalia that does not fit within the usual guidelines for determining sex and appearing as one sex on the outside but another internally. It is possible for intersex people to display the characteristics from birth, but many can go years without realizing it until examining themselves further later in life. Here is an older version of the intersex flag which utilizes purple, white, blue and pink (left) and a more recent one that puts an emphasis on more gender-neutral colors, purple and yellow (right).

5. A is for Aro-Ace Spectrum

The A in the acronym is usually only defined as Asexual, which is a term used to describe people who experience a lack of sexual attraction to any sex, gender, or otherwise. People who are asexual can still engage in healthy romantic relationships, they just don't always feel the need or have the desire to have sex and are not physically attracted to other people. If that's confusing, think of it this way: you are attracted women, but not men. You may see a man and think, "He's kind of cute" or "That's a pretty good-looking guy," but you still would not feel any desire towards that person, because that's not what you're into. Asexual people generally feel that way about everyone. That's the "Ace" half of "Aro-Ace."

Below are two versions of the Aromantic Pride Flag (top and middle) and the Asexual Pride Flag (bottom).

6. P and O are for Panseuxal and Omnisexual

Pansexual and omnisexual people are not limited by gender preferences. They are capable of loving someone for who they are and being sexually attracted to people despite what gender their partner identifies as. The word pansexual comes from the Greek prefix "pan-", meaning all. Pansexuals or Omnisexuals will probably settle for whoever wins their heart regardless of that persons gender.

The Q can be said to stand for Queer or Questioning, or both. "Queer" is more of a blanket term for people who belong to the LGBTQ+ community or who identify as something other than heterosexual or cisgender (a term that has come to describe people who feel that their gender does fall in line with their biological sex; i.e. someone born male feels that he is a man). It is also possible for someone to identify as queer, but avoid using it to refer to specific people unless you know they are okay with it; some people still consider it insulting. Questioning means exactly what it sounds like: it gives a nod to those who are unsure about their sexuality and/or gender identity or who are currently in the process of exploring it.

There's no one flag specifically for the letter Q, as all of the above sexualities and identities technically fall underneath this term.

This list is hardly comprehensive and there are a number of other flags, orientations and identities to explore. Pride Month is still going strong, and there's always more to learn about the ever-changing nature of sexuality as a whole and the way we understand it. It's a time for celebration, but also a time to educate and spread the word.

For a more in-depth description of different types of attraction and how they work, click here.

For more complete lists of gender identities throughout history, click here or here.

For a general list of commonly used words in the LGBTQ+ community and their definitions, click here.

Now go grab a flag and fly it high--you've got a ton to choose from!