Presidential Inauguration: What The Media Doesn't Show You
Odyssey

Presidential Inauguration: What The Media Doesn't Show You

I was able to attend the Inauguration of President Donald Trump, and compared to what the media showed that day, I had an entirely different experience. 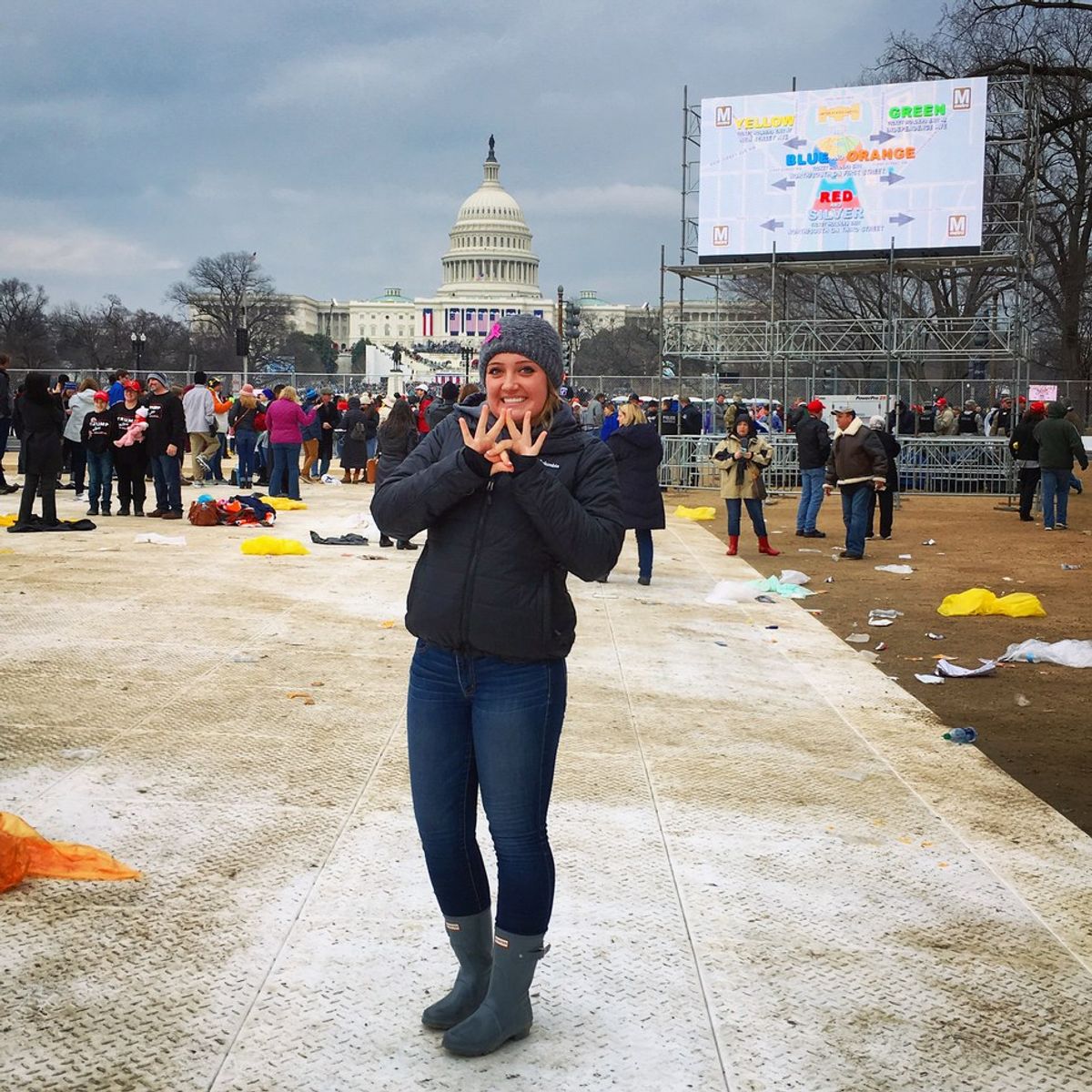 I had the privilege to attend the Presidential Inauguration of President Donald J. Trump in January of 2017.

Going there, I expected to see what the media portrays, a wonderful, peaceful transition of power. Too bad the media isn't always accurate. Not to mention, there's plenty that the media doesn't show you at all, rather than the typical distortion.

Of course, I assumed security would be stepped up like no other, and that was for sure. There's the obvious, like no clearly threatening objects, but even little things were checked. Everyone who has ever been through security knows the drill.

Open your bag, walk through the metal detector, watch them poke through your bag, move on.

This was different. Security examined my bag through and through, and I was forced to give up an apple because it was hard and could potentially be an object to throw (I was allowed to keep the banana because it was soft and probably wouldn't have been that great of ammo if I tried to throw it). I had my phone on, so I just had to let security click the "Home" button and show them that I could open it. For those that didn't have their phones on, they had to turn them on and go through the same steps to show that the phone was legitimately a cellular device and not a detonator or a makeshift bomb.

Although, the security at the Inauguration was some of the most friendly security I've experienced in my life.

For starters, it rained. It wasn't that cold, but it rained. Rain sucks. But anyway, the people there were people from all different walks of life. Although, I noticed one thing that was going on. Everyone that was talking was telling about how they adjusted their work schedule to be able to come; it was all about work. That was incredible, so many people worked, but still wanted to attend.

On the contrary, I noticed that a handful of people were older, and they were talking about the next generation and how awful they were - the work ethic was poor, the sense of entitlement was through the roof, and the manners were just plain rude. I beg to differ.

Another note on security, while waiting, we looked around to see if we saw snipers. Over 15 snipers were counted, meaning one wrong move, and we'd have bullet holes for eyes. That was mildly reassuring,

So we're bringing everyone out of the Capitol building, and it stuck out to me when the senators started emerging, Bernie Sanders was booed. I was surprised, but I assumed it was because he was a presidential candidate, a potential opposition to Donald Trump. Later, as the former presidents and first ladies enter, Bill and Hillary Clinton are introduced, and the booing is unfathomable. Some of the people around me were yelling, "Trump that b***h!" as well.

Finally, as Barack and Michelle Obama approached, they were booed uncontrollably. Not only that, but the people around me shamed Michelle Obama for being a classless first lady, and Obama was shamed just because of his policies that they didn't agree with. As he approached the microphone, potentially to speak, people were complaining that they never wanted to hear him speak again, yelling at him that he was so "full of sh*t."

As a republican, I can attest that I do not agree with Obama's policies, but Michelle Obama was an incredibly classy woman, and Barack was a phenomenal speaker that I would love to hear anytime.

As if booing every democrat would be physically impossible, Chuck Schumer, the Senate minority leader, made some remarks about the sacrifices of all Americans made in this country for the greater good. I can't say I heard anything he said due to the excessive booing, but I was able to read his speech, which was displayed on the screen. Since his short speech was clearly a bit more than a few "remarks," booing wasn't enough anymore. The crowd erupted with "Na Na Hey Hey," which you probably know as simply "Goodbye," by the Supremes.

You, if you watched it on national television, you didn't see any of it. You saw what the media wants you to see, not what is actually happening.

Once everything else has blown over, Donald Trump emerges out of his limousine and walks through the Capitol to come face the crowds. Everyone is cheering for the man. As soon as he was in front of the crowd, he smiled immensely, held a thumbs-up to his supporters, and mouthed "thank you" repeatedly. As you'd assume, everyone was chanting "Trump," but there were so many USA chants.

Even during Trump's speech (which was very brief, yet powerful), people were trying to start a USA chant. Make America Great Again, I guess.

Oh, and those pictures you saw depicting Trump's crowd at his Inauguration were inaccurate. He had a crowd, but nothing like Obama's record numbers from his first inauguration. Take it from someone who was there, and quite frankly, doesn't give a damn about the whole popularity numbers over the facts.

Overall, the Inauguration itself was just as you'd expect. Uniquely American.

At this point, it's a fend for yourself and jet out of there. I'm pretty sure that's when the picture the media showed as Trump's Inauguration was taken.

It was so hard to get out of the Inauguration because everything was closed off because of protestors. We walked for what seemed like three hours just trying to find the metro. Protestors didn't make it any easier.

I'm all for a good peaceful protest, but when you're screaming, "No hate, no fear, we don't want that f*cker here," you aren't really helping any cause.

All you really did was shut down any remaining streets that were potentially open.

I'm sure many of you saw the images of the Starbucks, Bank of America, and the limo on the street that were subject to destructive protests. We actually passed by there not too long before the protests happened. While walking around, it was common to hear commotion that could've easily been a protest. You might hear a flash-bang. You might see smoke. But, 100%, you will see police lights everywhere.

While walking around, it was typical to see 12 or more soldiers, Marines and Army men, on an intersection. Police were no longer on the ground, but instead on horses with shields on their bodies and faces of the horses. After a brick goes through a Starbucks window, hard saying what'll happen next.

I was completely safe and never feared for my safety, but the fact that people in America think it's okay and completely acceptable to act like an imbecile blows my mind.

Going to an Inauguration of a president is something that everyone should experience in their lives, but from an experience, don't be a moron. And, if you never get to experience the real deal like I was privileged enough to do, don't trust the media. Remember, the media wants you to see something.

Emmaline B
The Narrative
6446
https://unsplash.com/photos/O0T1SIgHAfM