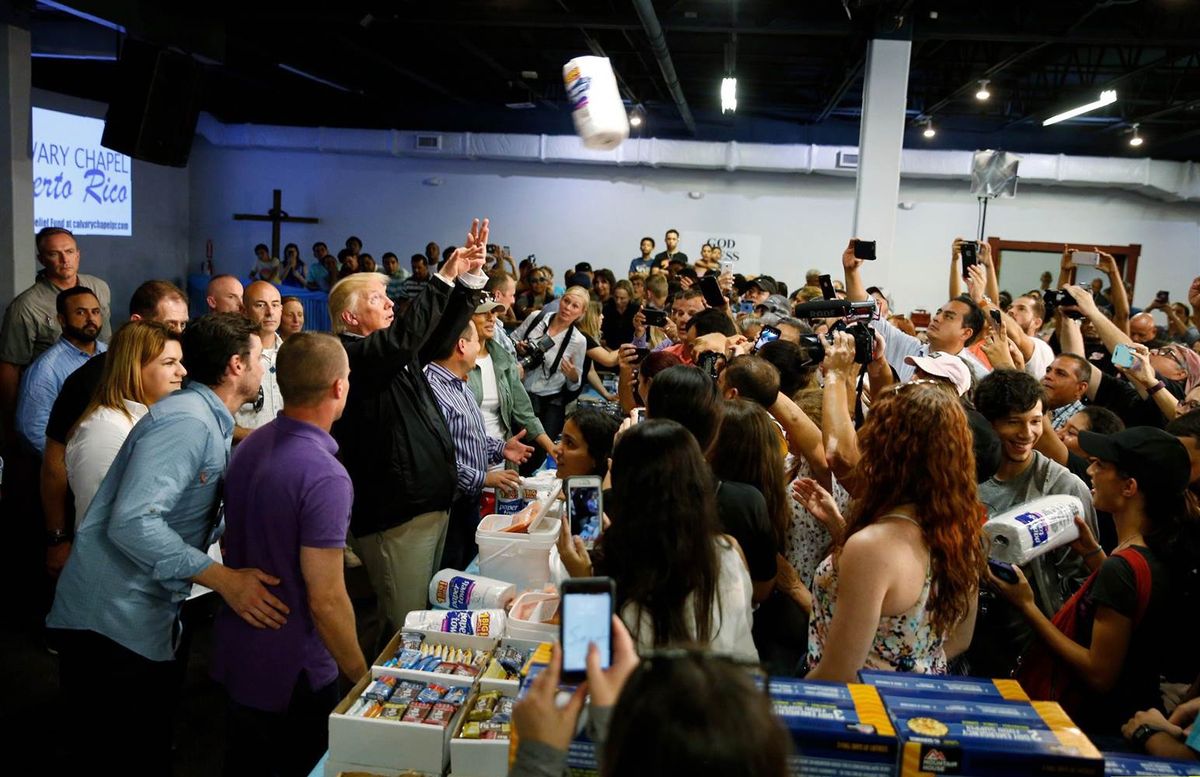 I have given President Trump my fair share of criticism since he was elected. These critiques did not come (solely) from a place of distaste for him as a person, but from a part of me that genuinely wanted him to step up and be everyone's president.

I guess I had hoped for too much.

Now that we are stuck with President Trump for the next four years, I believe we should start doing things to make his presidency go as smoothly as possible. The first of these things should be to keep him as far away from microphones as possible.

In short, the president needs to have an official speaker. We can no longer allow him to make addresses on his own.

Why am I saying this? President Trump has been fast and loose with his mouth since he was on his campaign trail and before that (probably since birth). Now that he is the leader of an entire nation, a nation that holds a high position internationally, we can no longer tolerate his thoughtless speech.

Let's discuss the horrors that left his mouth while in Puerto Rico.

PUERTO RICANS ARE AMERICANS TOO.

How dare he make it seem as though he is doing Puerto Rico a favor by helping them? They are Americans, they are your people. He was elected to SERVE the American people, and that includes the people of Puerto Rico.

Next, let's take a look at this direct quote:

"Every death is a horror, but if you look at a real catastrophe like Katrina, and you look at the tremendous — hundreds and hundreds and hundreds of people that died, and you look at what happened here, with really a storm that was just totally overpowering, nobody's ever seen anything like this. What is your death count as of this moment? 17? 16 people certified, 16 people versus in the thousands. You can be very proud of all of your people and all of our people working together. Sixteen versus literally thousands of people. You can be very proud. Everybody around this table and everybody watching can really be very proud of what's taken place in Puerto Rico."

NO. You should NEVER even THINK about doing that.

Why? Because an alternative event does not invalidate another current situation. Every single human life is precious. Yes, we can all agree that Katrina was a horrific catastrophe, but that does not mean that Puerto Rico did not experience a real catastrophe. The island was practically leveled. There was no running water. The electrical grid was gone. Think about how much everybody there was and still is struggling to survive. Think about the elderly population. Think about the people that suffer from chronic illness. Think about the children. Think about the mentally ill or disabled. Think about the families that have to focus on survival when they've lost a loved one, their home, practically everything. The conditions in Puerto Rico are terrible. The conditions in Lousiana after Katrina were terrible. Now is not the time to compare two different situations. Now is the time to act.

Next, did anyone notice how often President Trump made everything about himself?

President Trump has a terrible habit of trying to praise himself at every possible moment. For a situation as serious as an entire island (especially an island that is American territory) experiencing such a tremendous natural disaster, the last thing on Trump's mind should be how many people complimented him. As someone who has been elected to SERVE OTHER PEOPLE, President Trump really needs to stop thinking about himself.

That's all I will say about that.

Finally, can we talk a little bit about the clip of President Trump handing out paper towels?

Is this a game to him? Did he think he was at a sports game throwing shirts to his fans? This is beyond disrespectful and shows that he has not even an ounce of empathy towards the people of Puerto Rico. Instead of getting up close and personal with the people, hugging individuals, asking what they need immediately, helping at a shelter, observing facilities and making notes of what things need to be prioritized, HE THREW PAPER TOWEL ROLLS.

Does anyone else see the problem here?

President Trump does not know how to be an empathic, rational leader so he just needs to hire someone to do it for him and sit in the White House doing other things.