A Pomp With A Purpose

A Pomp With A Purpose 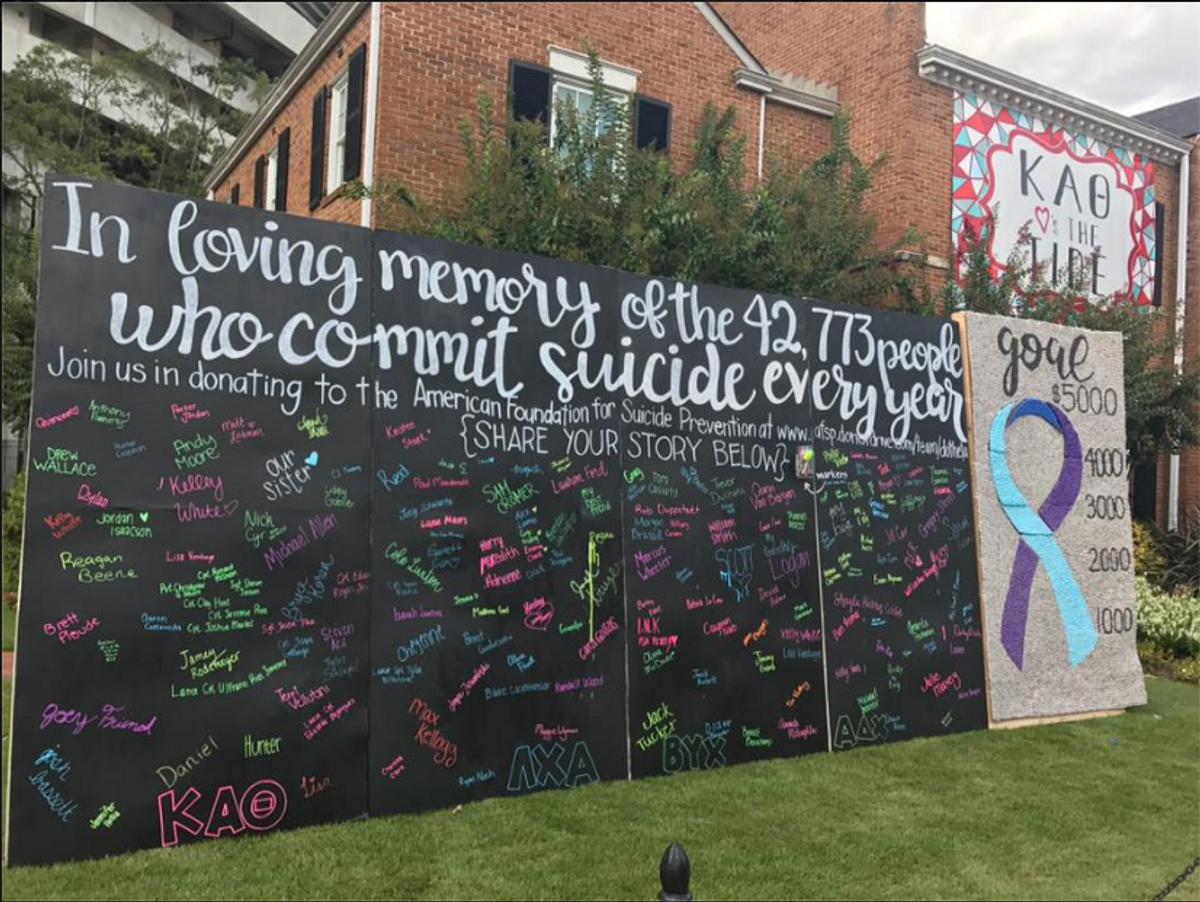 Every year during homecoming at The University of Alabama, organizations from around campus compete in several different events for points. These events include basketball and flag football tournaments, and choreography and lawn decoration competitions. Every year students and community members look forward to seeing all the lawn decorations, commonly known as Pomps. A pomp is 10x25 feet it is made of very small pieces of balled up tissue paper. At Alabama, organizations spend thousands of dollars and work tirelessly for two weeks to complete these massive projects. However, this year Kappa Alpha Theta broke tradition.

The theme for homecoming this year at The University of Alabama was A Legendary Legacy: Honor. Build. Live and Kappa Alpha Theta decided to make a pomp a fourth of the size of a normal one, and then donate their pomping budget to the American Foundation for Suicide Prevention.

“Theta is HONORING those 42,773 people that are lost to suicide every year,” said Kiersten Crouse, Kappa Alpha Theta Chief Panhellenic Officer. “This year, Theta is BUILDING the foundation for change on this campus. This year, Theta wants to help show people that life is worth LIVING.”

"I feel really honored that we got to use our hard work to help other people with this pomp," said Mo Quinn, Kappa Alpha Theta Chief Marketing Officer. "It's really exciting to see how much good a sorority can do in such a short period of time. This issue has affected everyone on this campus in one way or another, and I'm very proud and excited to be able to bring visibility and awareness to it."

Additionally, Theta is asking people to join them in donating. The pomp, the teal, and purple suicide prevention ribbon was used to track the progress of donations in reaching their initial goal of $5,000; their new goal is $15,000. Theta also put out large chalkboards and invited people to write down the names of those who have been affected by suicide.

"I'm so proud that we were able to bring light to such an important issue that has really impacted so many on our campus over the last few years," said Jaycie Finch, a member of Kappa Alpha Theta. "Foregoing a traditional pomp was a huge decision to make, but as soon as the idea was proposed we knew we could make a larger impact than thousands of tissue paper balls would ever make."

“We really wanted to give back to AFSP, a cause so dear to our hearts,” said Sarah Rumfelt, Kappa Alpha Theta President. “This was the perfect opportunity to not only raise money but also raise awareness and remove the stigma. I am so thankful for all of the support we have received and am proud of the chapter members for making the decision to break tradition to leave our own legacy.”

"The best thing we can do is be there for one another," Quinn said. "You never know who may be struggling and if you wait to tell someone how much they mean to you it could be too late. Tell your friends how much they matter to you and never give up on them. And take advantage of your resources- go to the counseling center, bring your friend and don't be afraid to tell someone if your struggling."

To join The University of Alabama Kappa Alpha Theta’s in donating to the American Foundation for Suicide Prevention click here.