My Personal Experiences At The 2012 Winter Classic
Odyssey

My Personal Experiences At The 2012 Winter Classic 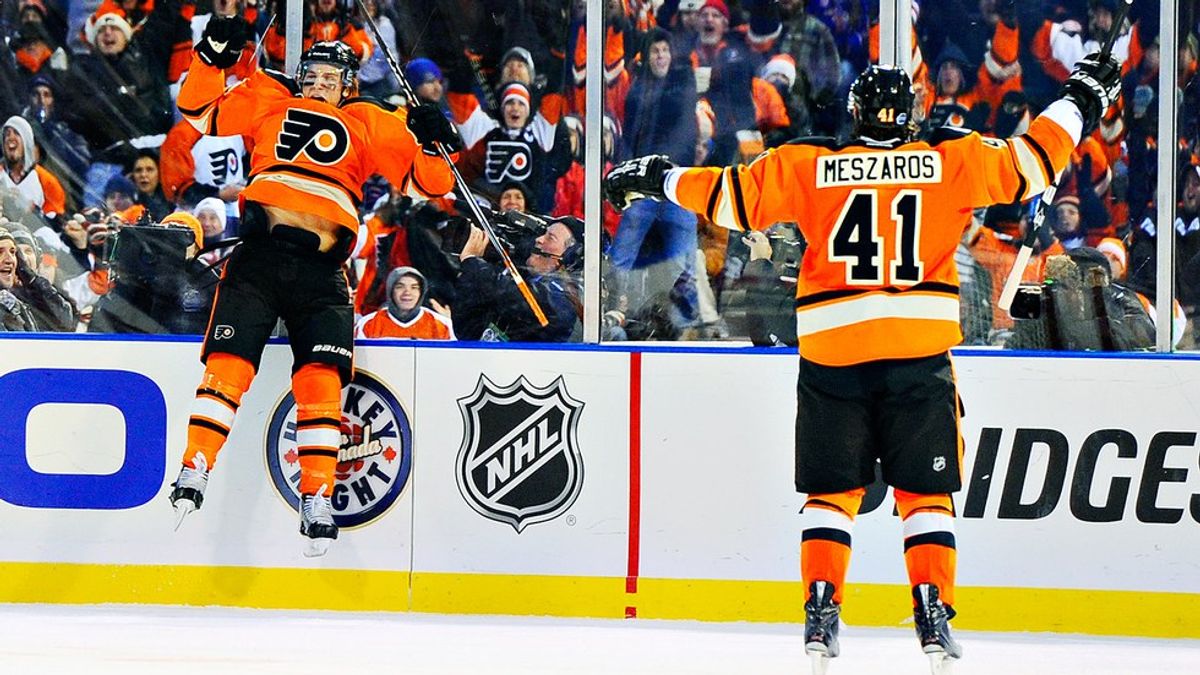 I remember Christmas Day of 2011 very vividly. Mostly because that was the day my dad gave me tickets to the NHL Winter Classic. For those of you who don't know, the Winter Classic is the annual outdoor hockey game played on New Year's Day. In 2012, it was scheduled to be in Citizen's Bank Park in Philadelphia. Our beloved Flyers were going to play the New York Rangers, and I was going to be there to see it.

But that wasn't all that was going on that week. A few days before the big game, there would also be an alumni game between former Flyers and Rangers players. There was also a game scheduled between the Flyers' and Rangers' minor league teams. They were all outdoor games, and my dad and I were going to all of those games.

First was the alumni game. Most of the players had been long retired before I started following hockey, but I knew most of them. My personal idol, Bernie Parent, was going to be the starting goalie at age 66. Some of my favorite players from my childhood, like John Leclair and Eric Lindros, also played in the game. For the first time in my life, I could watch players from the legendary Broad Street Bullies team that won the Stanley Cup in the 1970s play hockey. Even though I didn't feel the nostalgia that many of the older fans in the crowd felt, it was still a surreal experience for me. That the Flyers won, 3-2, was just the icing on the cake. It was a great start to a fantastic week.

The Flyers' minor league team, the Phantoms, hold a special place in my heart to this day. When the team was in Philadelphia, my dad took me to see them all the time. It was less expensive to go to Phantoms games as opposed to Flyers games, and the Phantoms were usually considered to be more kid-friendly. I loved going to Phantoms games. So when the city destroyed the Spectrum and the Phantoms relocated to Glen Falls, New York, I was devastated. It was certainly a great to see the Phantoms return to Philadelphia, let alone in an outdoor game. Early on, the game was not going the Phantoms' way, but they fought on and forced overtime, eventually winning 4-3 in overtime.

Then came the big game. Unlike the other two games, my dad and I sat in the lower level. We were a little far away from the ice, but we could still see the action. And it was a magical day. I got to see my favorite professional sports team in the world play outdoors. I remember seeing Brayden Schenn score his first career NHL goal; Schenn has gone on to be one of my favorite Flyers since. I remember snow beginning to fall during the intermission between the second and third periods. And, most of all, I remember that the Flyers blew a lead and lost the game, 3-2.

You might think that a loss would put a damper on my spirits, but it did not at all. I got to savor a once-in-a-lifetime experience with my dad. We got to see our favorite players, past and present, play a game we love. Sure, some fans didn't take the loss particularly well; it is Philly after all. But to me, the outcome of the game was secondary. January 1, 2012 is still one of the greatest days of my life. The week leading up to it wasn't too shabby either.

I bring this up now because of the news that the Flyers and Penguins will play a series of outdoor games in the coming years, one game in Pittsburgh and one game in Philadelphia. Even if it wouldn't be the first outdoor game that either team has played, it is still an event I am looking forward to. The atmosphere of that game in 2012 was magical beyond description. The Winter Classic is the single greatest thing created by the NHL, and it's a tradition I hope to see continue for many years to come.