An Open Letter To Donald Trump

Dear Mr. Trump, I do not hope this letter finds you well... 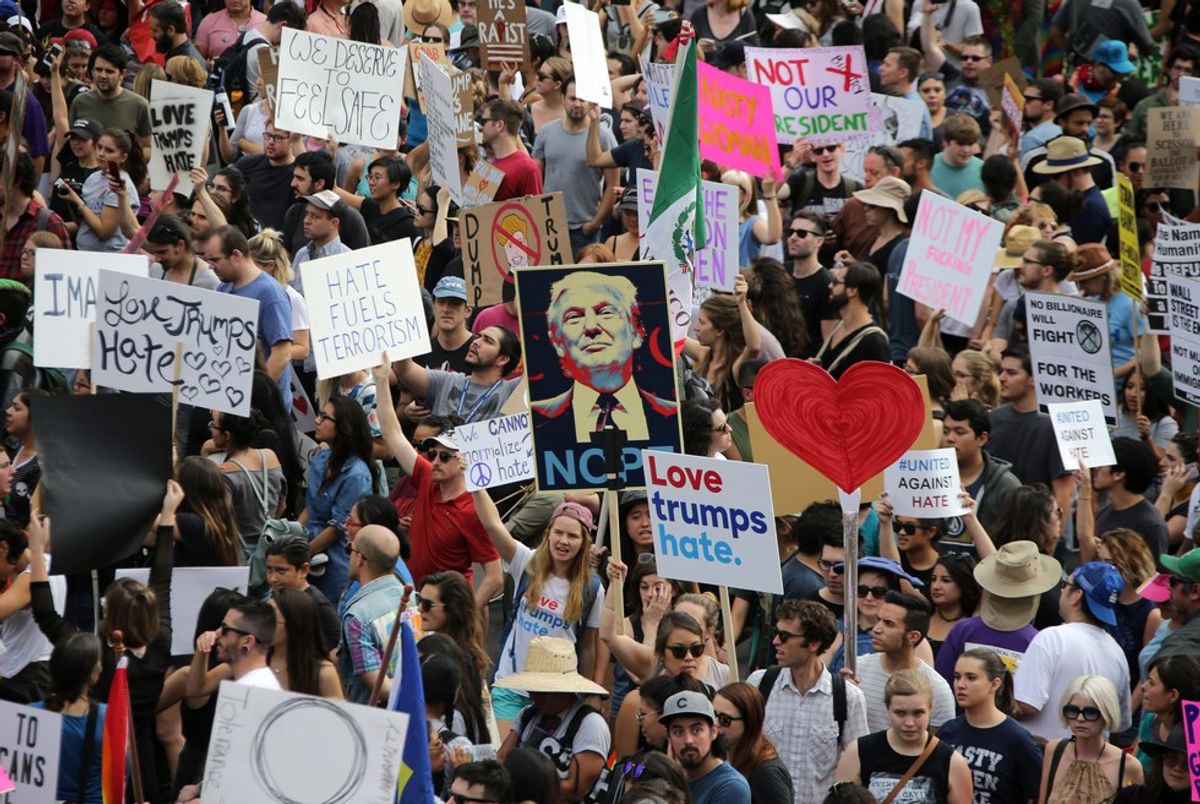 First, I will apologize for addressing you as Mr. Trump instead of President Trump, but your actions lately have not earned you that title. Let me introduce myself. I am a 20-something from New England. I go to Franklin and Marshall College in Lancaster, PA, you know, one of the cities that so desperately needs its factories back? I am majoring in biology, so as you can imagine, I'm pretty passionate about science and research. I'm also passionate about speaking my mind and standing up for others because I know what it's like to be treated differently for a part of my identity.

You, Mr. Trump, are not a good man. You do not stand for the positive values that the United States of America was founded on. You represent the voices of people who feel suppressed by the progressive movements our country has made over the past decades. The same people who see our prior progress as a failure. You are a beacon of hope for those who want our country to go back in time. Who want to go back to when women listened to their husbands and stayed at home with the kids. When blacks were "the help" and Mexicans could only be day laborers maintaining the gardens of America's wealthiest. You represent the potential to unite Church and State by only teaching abstinence in sex education, defunding Planned Parenthood, bringing religion into public schools.

I have never been the type of person to tell someone that their beliefs are wrong. That is not the point of this letter. Everyone has a right to their own opinion, thus, I am sharing mine. But I also hope to show you, and anyone who shares your values, that when certain opinions are given power in a place like the White House, they infringe upon the rights of other people. It is when opinions are turned into actions that we face conflict. I cannot stand by and patiently wait for the next election cycle while you suppress human rights. I cannot stand by while you appoint people to powerful positions who have no qualifications or who aim to take down a particular institution. I cannot stand by while Americans lose their freedom of speech. I will not watch while immigrants, who have gone through all of the legal channels and obstacles we placed in their way, are sent back to their "home" as soon as they set foot in a land that is supposed to represent freedom and opportunity.

While I may be called a "fragile snowflake" for publishing this, I will firmly stand by anyone who stands up to you. You, Mr. Trump, are a bully. You take advantage of good, honest people to help those who don't need it. You want to help businesses by lowering the taxes they pay, when you know that any saved money will only go to the top people instead of raising wages for lower ranking employees. You want to bring jobs back to America by severing ties with foreign allies. I have nothing wrong with creating more jobs in the U.S., but our economy currently relies on trade with other nations and suddenly cutting those relationships could have devastating effects to the value of our currency. This is economics 101 that a silly little college girl understands.

So, Mr. Trump, you can take away my reproductive rights. You can say that my body is not mine to control. You can allow insurance companies charge me more because having two X chromosomes is a preexisting condition and I should be discriminated against because of that. You can contaminate my water with your pipelines. You can build a wall that will cost taxpayers billions of dollars and probably won't make any difference for immigration. You can deport legal immigrants with green cards and prevent the entry of honest people. You can prioritize immigrants based on their religion even though most terrorist attacks on U.S. soil are committed by what the FBI calls homegrown violent extremists. You can prevent the marriage of two people based on their sex and give businesses permission to discriminate against these same people. You can contribute to climate change by cutting research funds and hiding information from the public. You can eliminate endangered species when you build your wall. You can tell people to work more jobs instead of raising the minimum wage even if this takes them away from their families. You can torture human beings to get information. You can destroy this country.

But, Mr. Trump, I will not go down easily. I will not stay silent. I will stand up for others. I will encourage future protests. I will call my senators and representatives. I will sign petitions. I will educate myself and those around me. I may be one person, Mr. Trump, but I am a part of a movement and this movement is the largest the United States of America has seen. A movement that has support from people all over the world and who represent all races, ethnicities, sexualities, and religions. A movement gaining momentum everyday that will not stop until you are out of office or until you right the wrongs you have committed. We will fight until the future is bright once again.