Obama's Address: Guns And Terrorists Are Just The Tip Of The Iceberg
Odyssey

Obama's Address: Guns And Terrorists Are Just The Tip Of The Iceberg

What ever happened to "United we stand, divided we fall?" 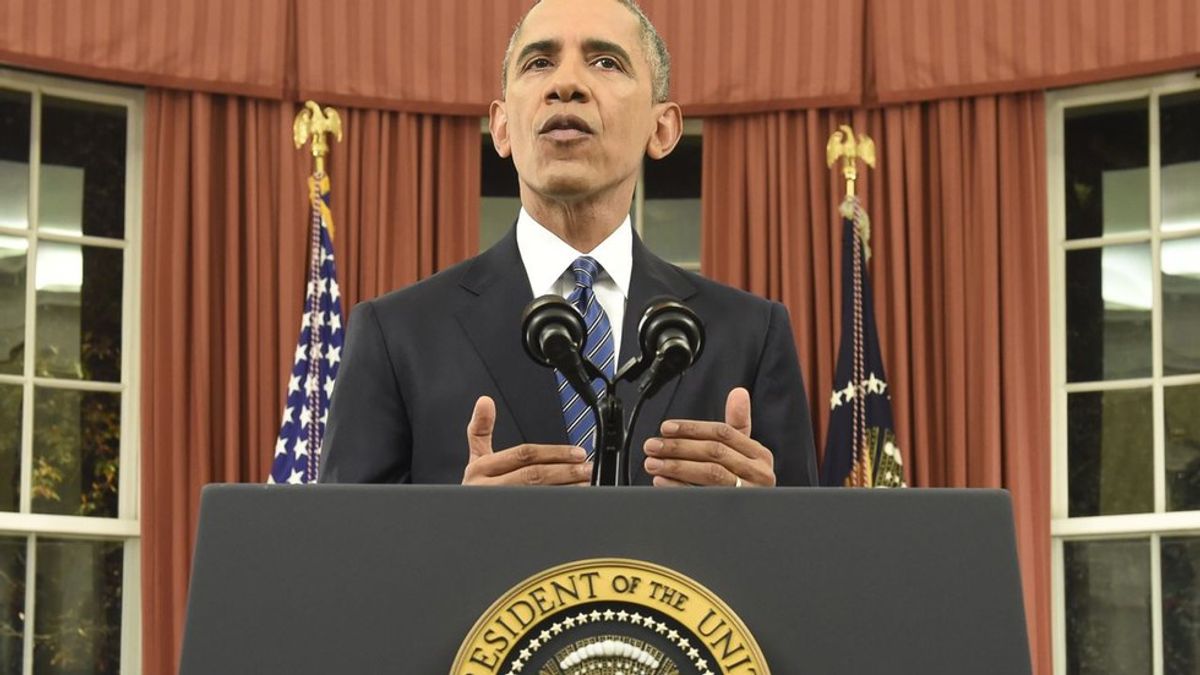 Just before Sunday Night Football kicked off on December 6, President Obama addressed the nation on some very divisive issues. Gun control and terrorism took the driver's seat for much of the president's time on air, and for good reason. Both are very relevant and important to the American people today. But this isn't exactly news to anyone. I value the fact that Obama took the time to look us all in the eye and acknowledge major issues, but I truly think that terrorism, gun control or any other single issue in particular is a drop in the bucket when I think about the glaring problem that underlies just about every headline I've seen in the last several years.

We are no longer "one nation" or "indivisible," as the Pledge of Allegiance suggests. The Pledge of Allegiance is nothing more than a nursery rhyme if you ask me, because so much of what it says has been tossed right out the window. "With liberty and justice for all?" Don't make me laugh. Inequality has been a major theme in the American story, from violent and overt racism to the ever-widening wealth gap. How can anyone say that we have ever been a truly "united" nation if we are, in two-thousand-freaking-fifteen, just now allowing all of our citizens to marry the one they love?

To that, I echo Captain Picard:

At the highest levels of government, victory is what really matters. Staying in office matters. Having more seats in Congress matters. Undercutting the opponent matters. Votes and approval ratings matter. At the top, where moving forward and making progress affects us the most, it matters the least. The political landscape of our country has become a childish blame game. And that is the problem in America.


Take gun control, for example. With shooting after shooting, the conversation hasn't changed one bit. The two sides of the argument on gun control still sound like two bickering children, tugging back and forth on a stuffed animal.

The pro-gun community screams, "No! Get your hands off! It's mine!"

And then the anti-gun community whines, "You had your turn! Go play with something else!"

The other headliner from Obama's address, the threat of terrorism, is a very different kind of issue. It's a global issue, not an American issue. But the arguments about granting refuge to people fleeing Syria, surveilling mosques in the U.S., and the intensifying prejudice toward the entire Islam community are driving the wedge that divides the American people deeper and deeper. As Obama said in his address, that is exactly what terrorist groups want to happen.

It's time for us to stop acting like children. When you were a kid and would fight with your brother or sister over something, how long did it take for your parents to lose their patience, step in, and force a compromise? A couple minutes? Well, then how is it possible that we have watched 351 mass shootings occur in our country in a single year and still don't think it's time we stop bickering with no end in sight?

Whichever side of the gun control fence you come from, you can't deny that something needs to be done. So far, all anyone has done is make a fuss. Posting on Facebook won't help. Berating your liberal friend about your right to bear arms won't help. Calling your conservative friend a gun nut won't help. And I hate to say it, but writing this article probably isn't going to help either.


My point is that the issues that divide us are not the real issues at all. I'll never claim to be an expert on anything (except for maybe the ideal milk-to-cereal ratio), but if you ask me, the single biggest threat to the future of our country is the fact that we are so divided on everything. We are unwilling to act sensibly and unable to reach a compromise on any major issue, and that will be our downfall if we don't wake up soon. We are so caught up in assimilating the entire world into our very limited worldview that we lose sight of the big picture.

Recently, in Colorado, two major issues in America intersected when a shooting occurred at a Planned Parenthood clinic. The responses I saw on social media sickeningly demonstrate why big issues like gun control and abortion extend far beyond the direction we lean on them.

Above is an iPhone screenshot I took while I was scrolling through my Facebook feed the day of the shooting.

These two posts are at the top of a very long list of similarly crafted, hateful posts in the wake of a brutal and senseless killing that left innocent people dead. Regardless of the motive behind the shooting, it's obvious that there are Americans out there that smile in the face of tragic death because of the way they feel about abortion. And no matter your stance on the issue of abortion, I hope you recognize that those kinds of hateful attitudes are what's ruining this country.

If our political system can shift its focus away from winning elections and look toward the future, I'm sure we can find common ground on the issues that divide Americans to their very core. The moment we stop thinking about politics in terms of Democrats versus republicans will be the moment that this country takes a tremendous leap forward.