Could the unicorn of the sea really be a hoax? 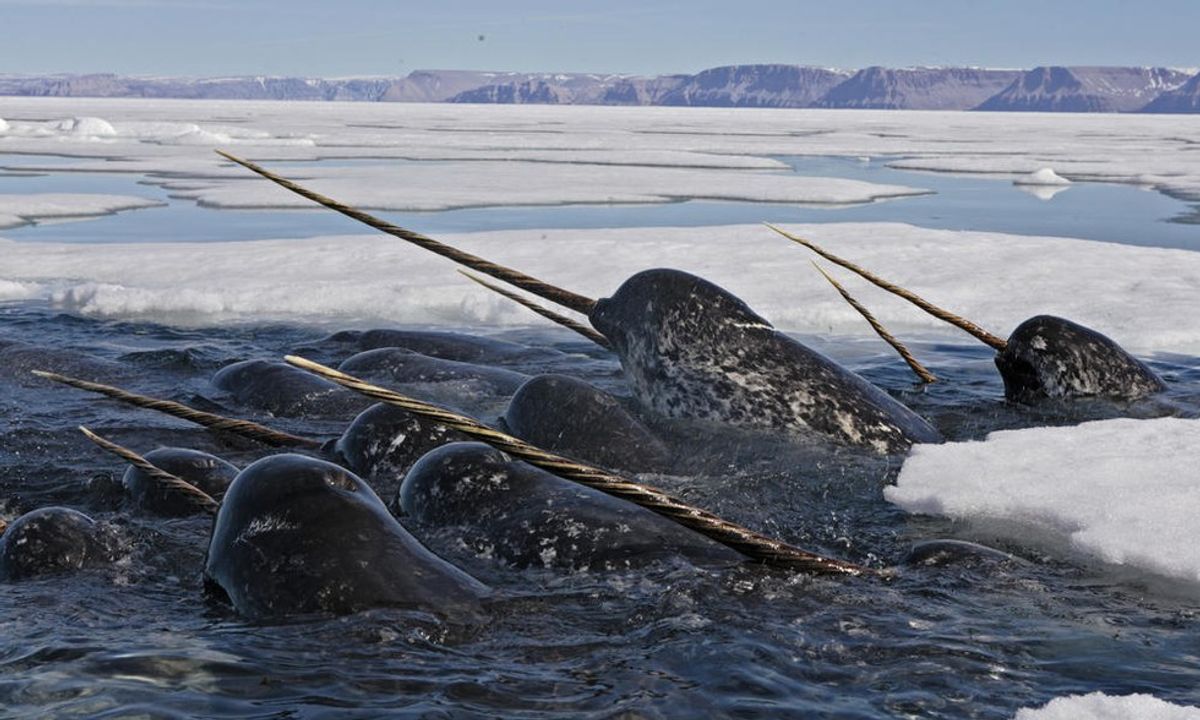 As my move-in day for college draws closer, I find myself losing sleep due to a mixture of excitement and anxiety. During these sleepless nights, I've begun diving down a strange section of the internet - the black hole of conspiracy theories. Sure, a fair amount of the content I've perused consists of crazy ramblings about celebrities secretly living as reptilian creatures wearing human flesh, but a few caught my attention. Specifically, one of the least talked about theories I've discovered. Lurking on the internet is a small group of people who believe that narwhals, the unicorns of the sea, have never existed. Before you click out of this article, hear me out. While I won't divulge into my personal thoughts on the subject, I'll go ahead and present the thoughts from both sides and allow you to pick your own. It should be noted that most conspiracy theories, such as this one, are to be taken lightly, and have no serious implications in our day to day lives. That being said, to start off, we'll analyze the beliefs of those who believe narwhals exist.

This first position almost seems self-explanatory. You may find yourself thinking, of COURSE they exist! The commonly held belief, both in the scientific and pedestrian fields, is that narwhals are just as real as the pets we having living alongside us. After all, major names including National Geographic and WWF have run stories on the creatures. In WWF's "Unicorn of the Sea: Narwhal Facts" article, the organization shares basic facts and statistics on the creatures, and even mentions the satellite tracking system they use to monitor the endangered species. A link at the bottom of the article transfers readers to an even more extensive narwhal page, featuring migration paths and a few more statistics. Scientists know quite a bit about narwhals and their existence. The biggest claim for those who believe in narwhals is that they have common sense on their side. Everything published about the species point to their existence.

Then, the group of doubters enters the scene. I first heard of the theory from a video on YouTube. A channel named Super Carlin Brothers posted a video entitled "Are Narwhals Real?!" just over three years ago. The content itself is only three minutes long, and the main purpose of the video seems to be mere entertainment, but it still gets viewers thinking.

Jon argues that if any sort of animal were to be made up as a hoax, the narwhal seems to be a likely candidate. All it would take is some basic photo editing skills to add a horn to a whale. As the narwhal is "supposedly" a member of the whale family, this may not be a far stretch. The unicorn, a clearly fictional creature, is simply composed of a horse with a horn photoshopped on. Realistic images and footage of fictional creatures exist, and it isn't out of the realm of possibility that somebody could create footage of a fake creature and attempt to pass it off as authentic. Another argument from the doubters is that narwhals have never been seen in any zoo or aquarium. In fact, most people don't know anyone who has even seen a real narwhal face to face. For those who are skeptical of the narwhal's existence, seeing IS believing. The fact that extensive scientific evidence exists regarding the narwhal doesn't frighten this position either. Plenty has been written describing mystical creatures as well. J.K. Rowling delves deep into the world of mythical creatures and their care in her writing revolving around the Potter universe. Making up facts also lies within the realm of possibility.

Now, despite all this, someone would need a motive for faking an entire species. If you visit WWF website, you'll find a donate button on the page for narwhal preservation. Monetary gain, while not particularly impressive, would be a benefit to inventing a fictitious species. The power to convince the world that a nonexistent creature exists is also tempting, if possible to pull off. While they may not have science on their side, those who doubt raise some legitimate points.

When all is said and done, it's up to you to decide where you lie in the narwhal debate. Do they really exist, as we've been told, or is there a worldwide hoax happening right before our own eyes?Even if the discussion may be irrelevant or silly, it makes for excellent conversation and hilarious debate, no matter what you believe.