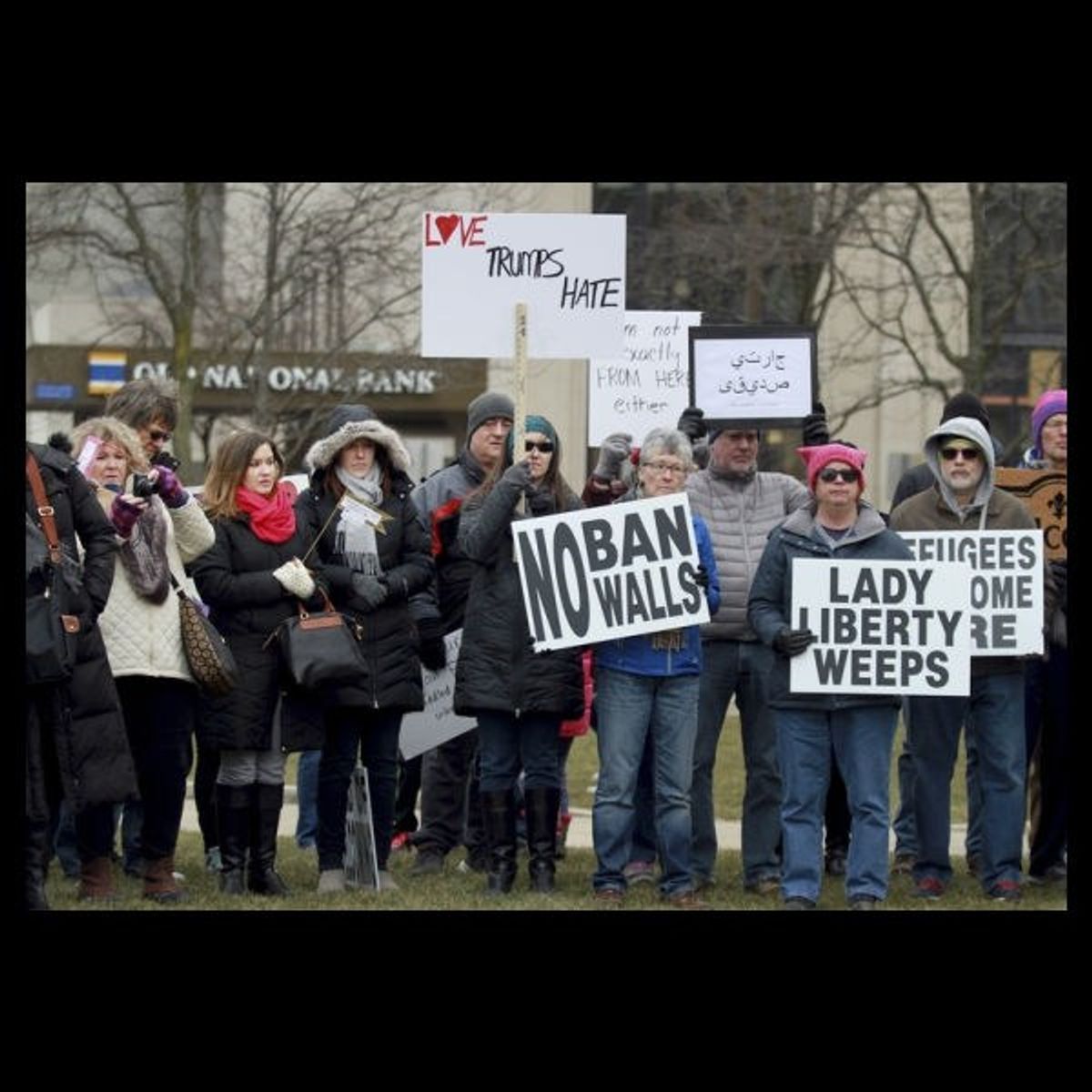 On Saturday, February 4th, there were several “No Ban No Wall” protests held across the nation. I attended one of these protests in Fort Wayne with a few friends, and it was an amazing experience. Signs saying “Refugees Welcome Here,” “Lady Liberty Weeps,” and “No Ban No Wall” dotted the crowd. One sign even read “I came here to punch Nazi’s and chew bubblegum… and I’m all out of bubblegum.”

A diverse crowd of over 300 people showed up to make known their opposition to the rich asshole’s unprecedented executive order banning immigrants based on their faith. Among them were Ahmed Abdelmajeed, a Muslim-American professor from Manchester university; Deena Hourani, a 17-year-old Syrian-American high school student; and Morrison Agen, a community leader and activist in Fort Wayne.

While they were not the only ones, each of these three gave speeches that have stuck with me for different reasons. Professor Abdelmajeed spoke and powerfully pointed out why we were there. “We the people will not succumb to fear mongering. We the people will stand up for what is right. We are not here solely because we belong to a group targeted by hate. We are here for justice. We are here for equality. We are here for one another.” Deena Hourani stood up and told us the story of how her parents immigrated from Syria over 35 years ago, in order to give a better life to their children, to her. How if the ban had been in place then, she would not be here today. And Morrison Agen’s speech was one filled with fiery passion and a righteous anger that I had not seen before. He said “I want to quote from a book that Republican lawmakers like to cite when they make their policy decisions. I’m going to read a small passage from that book. It’s from Matthew 2:13-15. ‘Now when they had departed, behold, an angel of the Lord appeared to Joseph in a dream, saying, “Arise, take the young Child and His mother, flee to Egypt, and stay there until I bring you word; for Herod will seek the young Child to destroy Him.” When he arose, he took the young Child and His mother by night and departed for Egypt, and was there until the death of Herod, that it might be fulfilled which was spoken by the Lord through the prophet, saying, “Out of Egypt I called My Son.”’ Morrison paused, and then said “That’s right everyone, Jesus was a refugee!”

Surrounded by so many others who stood alongside our Muslim brothers and sisters, our Latino brothers and sister, and our refugee brothers and sisters, filled me with a sense of solidarity that day. I’ve been a vocal opponent of President the rich asshole’s actions since the beginning of his inaugural campaign and standing with others who were also against these clear violations of our Constitution and our American values filled me with a kind of hope. The next four years are not going to be met without resistance as we see atrocities committed and tragedies ignored. We will speak out because no one is free when people are oppressed.

Martin Niemöller summed it up well when he said
“First they came for the Socialists, and I did not speak out-
Because I was not a Socialist.

Then they came for the Jews, and I did not speak out-
Because I was not a Jew.

Then they came for me-
and there was no one left to speak for me.”

Well, today I say to you, “First they came for the Muslims, and I said HELL NO.”