Addressing Islamophobia in the Jewish Community 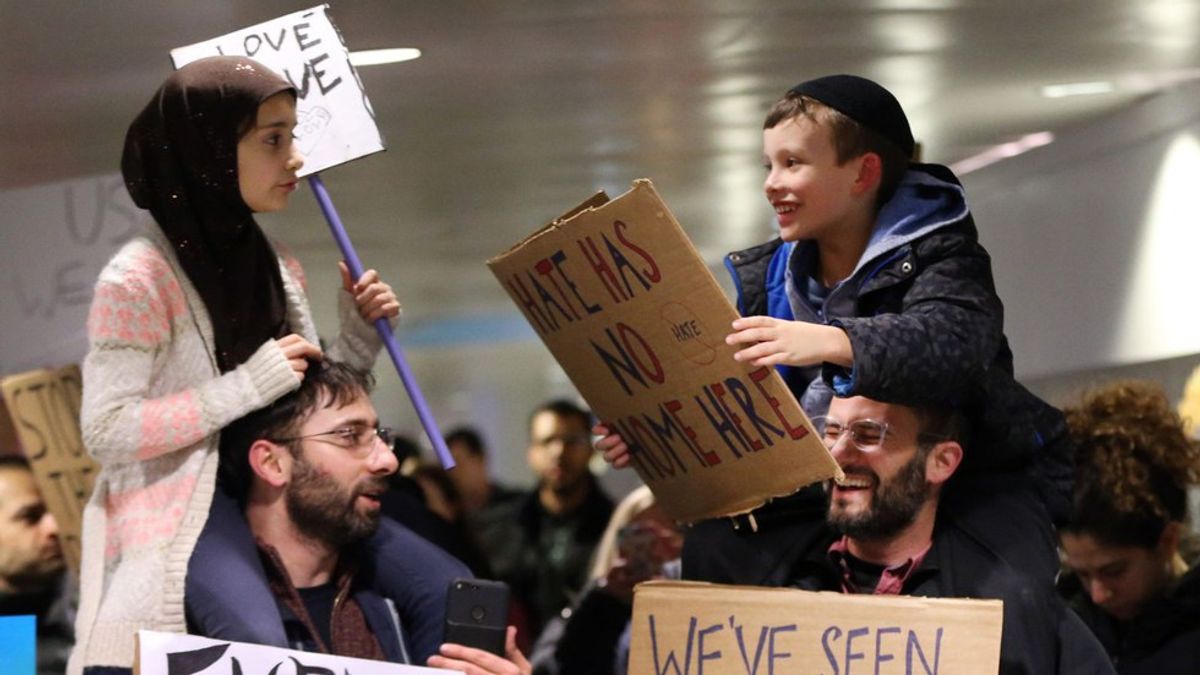 If you've been living anywhere on planet Earth these past few weeks, you were probably in some capacity paying attention to Trump's de facto Muslim ban. You have also probably noticed the outcry of resistance and opposition to this ban. And perhaps you noticed the stories of interfaith resistance such as this one, about a Jewish father and a Muslim father both at a protest with their children. This display of Jewish-Muslim solidarity was incredibly moving to me for a multitude of reasons. First of all, I believe the ban is both entirely unconstitutional, as well as a shameful repetition of past American mistakes; to see resistance in such numbers by all types of people is an incredible thing. On another level however, this display of interfaith cooperation was inspiring, but also - and perhaps sadly - surprising.

Growing up, though at home I was always taught religious tolerance, from my community at large, specifically the Orthodox Jewish community, I encountered a slew of Islamaphobia. Muslims were deemed "the enemy" - sometimes jokingly, sometimes seriously. When new mosques were being built in my town instead of being open to the possibility of a more religiously diverse community, people were quick express concern regarding "those people taking over". When the door of tolerance closed, the floodgates of hate opened. I have seen comments by Jewish people, people from the community in which I grew up, on Facebook (oh evil, sinful Facebook), calling for the eradication of Islam, calling for the removal of Muslim people, calling for Trump's ban to be upheld on the basis that Islam is a backwards religion that cannot be allowed to dominate and destroy America.

How many times have the same been said about us? While I was taught about religious tolerance growing up, I was also constantly reminded of every tragedy to befall the Jewish people, every rule and law designed to keep Jews a lesser people, every instance of libel, slander, pogrom, persecution, exile, and genocide throughout history that happened to my people. Day in and day out I grew up learning that there are a plethora of people on this fair planet who consider Jews to be "the enemy", who don't want "The Jews taking over this country", who believe "The Jews" already have taken over this country, and who call for the destruction of the Jewish people. How is it possible that a people who have experienced so much religious persecution and so much religious intolerance are able to turn around and employ the same hateful tactics to another religious group? How is it possible for us to shamelessly use the same rhetoric of irrational fear when we know better? How can you be complacent at best and actively supportive at worst concerning the persecution of another religious people?

Many of those making these comments claim that their positions stems from fear of terror attacks. Muslim refugees trying to come to America are living that fear. Many people might retort, "I don't see Muslims speaking out against terrorism". To that I respond, are you actually making an effort to seek out and listen to the opinions of Muslim people? To that I respond, are you suggesting that the entire global Muslim population is responsible for terrorism? To that I respond, how are you actively speaking out against hate groups and terror organizations related to your religious group?

No, Jews and Muslims don't agree on everything. But come on, Jews and other Jews don't even agree on everything! America right now is tense, it's fueled by uncertainty. For people who fall under any category that isn't white cis Christian male, this is an especially uncertain time (although to be fair, that's not really a new phenomenon for many). We may have been hateful in the past, but let's learn from our mistakes rather than repeat them. Let's follow the lead of Muslims and Jews who are putting aside cultural differences to come together against injustice. Let's extend the olive branch, replace shallow fear with a deep attempt at understanding. Instead of letting our differences drive us apart, let's try and find where are similarities bring us together. It won't always be as easy as sitting around, joking, and eating hummus, but whatever discomfort will be worth the end result of a stronger, resilient, interfaith community.

Caitlin Marie Grimes
University of South Florida
10966
Beyond The States