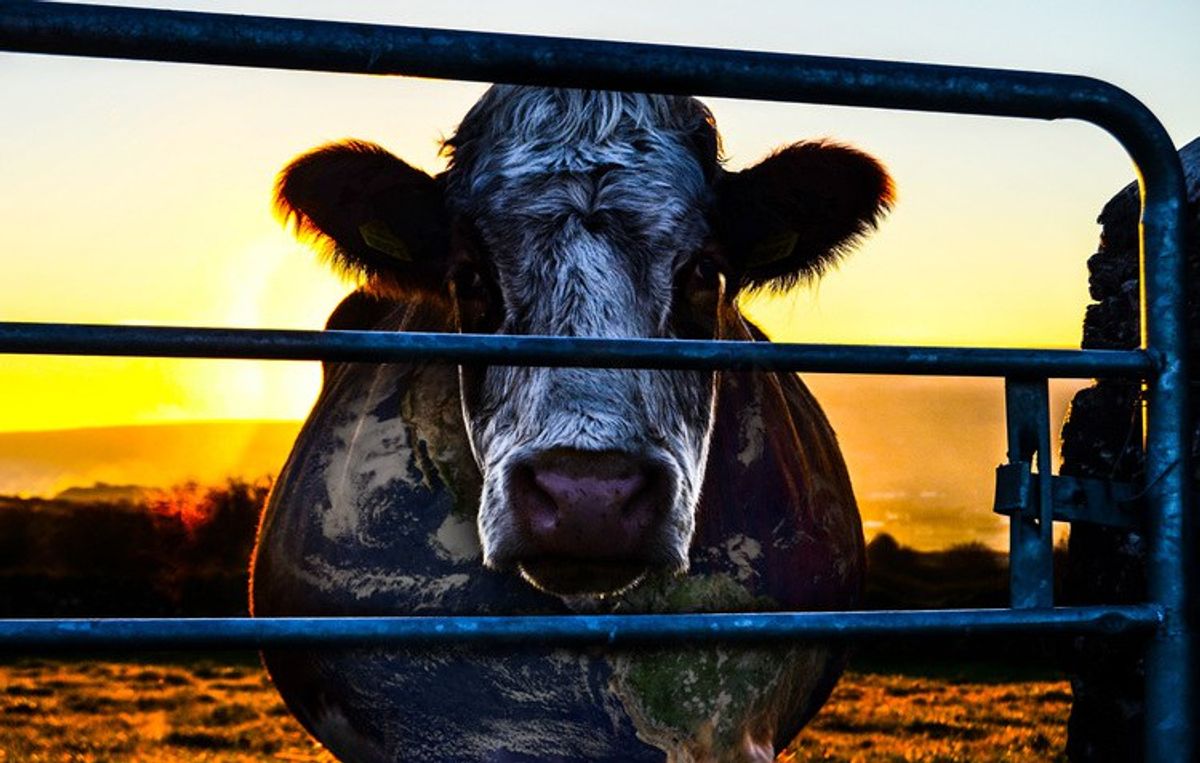 There is no denying that the state of the Earth is in imminent danger. Human-induced climate change is real, and top environmentalists such as Bill McKibben, are becoming less and less hopeful that the damage can be reversed. This is a scary thought; it is difficult to accept that our actions and participation in larger systems could leave a world that is very difficult to live in for future generations to come.

We know we should turn off the lights when we leave a room. We know we should recycle. We know we should shut off the water when brushing our teeth. We know that walking or riding a bike rather than driving a car is the more environmentally sound choice to make. However, it is less common knowledge that we need to stop eating meat.

"Cowspiracy: The Sustainability Secret" is a documentary, available to stream on Netflix, that dives into the environmental issue the largest environmental organizations have chosen to ignore: animal agriculture. Although it is the leading cause of deforestation, water consumption and pollution, rainforest destruction, species extinction, habitat loss, topsoil erosion and ocean ‘dead zones,’ it has gone unaccounted for as a primary reason for these environmental threats.

The filmmakers, Kip Anderson and Keegan Kuhn, were met with resistance during their journey to create this film. It appears as if this resistance is purposeful, and their desires to bring light to the issue could result in a backfiring from large animal agricultural industries.

Here are some of the facts:

1. Animal agriculture is responsible for 18 percent of greenhouse gas emissions. This is more than the combined exhaust from all transportation.

2. Cows produce 150 billion gallons of methane per day, with methane having a global warming potential 86 times that of CO2 on a 20-year time frame.

3. Agriculture is responsible for 80-90 percent of U.S. water consumption.

9. Animal agriculture is responsible for up to 91 percent of Amazon destruction.

10. 80 percent of antibiotics sold in the U.S. are for livestock.

The numbers are daunting. It is important that the world’s leading environmental organization begin to recognize the livestock industry for what it is: a horrifyingly inhumane, destructive industry. The reasons why organizations have ignored this are likely related to money and politics.

Large livestock industries place huge investments in keeping this reality quiet; if it was widespread public knowledge that meat is not only unhealthy, but also a huge player in the destruction of our planet, then their industry would eventually cease to exist.

This film is essential for all. If you have dubbed yourself an environmentalist, or care even the slightest about the future of the planet, then making the decision to stop eating meat and animal byproducts is inevitable. The U.S. in particular must begin to share this issue with the public because as a nation we produce and consume more meat than any other nation on Earth. According to Cowspiracy’s website, the difference between the diet of a vegan and a meat eater are huge:

I became a vegetarian because of another environmental film: "Food, Inc". Although it may seem a silly reason to some, I am not the only one who chose to do so as a result of education. Education produces action, and we need to act. We should all be striving to live off a plant-based diet.

The Earth depends on it. Beginning slow can really allow you to realize the benefits of a more plant-based diet both physically and mentally while contributing to the fight against climate change.

Many of us have become nearly desensitized to the images of slaughter that are often used to encourage vegetarian and vegan diets. I encourage everyone to consider a plant-based diet for his or her New Year's resolution. If not for the animals, do it for our children’s futures.

Caitlin Marie Grimes
University of South Florida
8709
Beyond The States